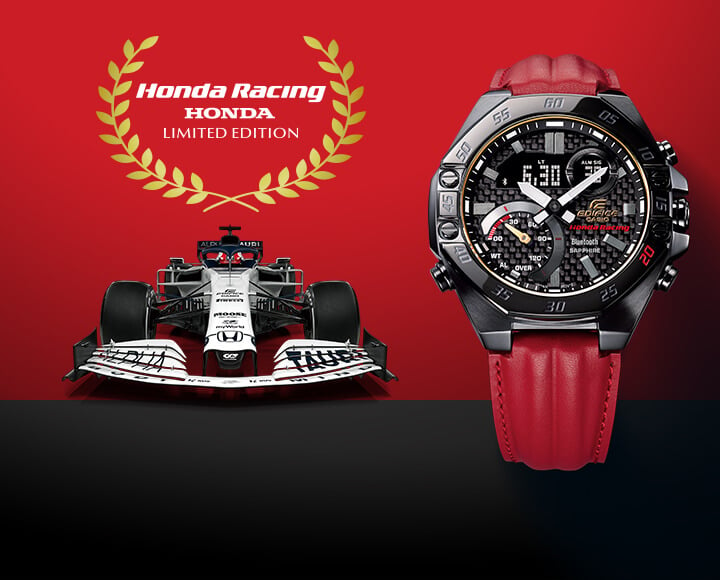 Casio has been the official watch partner of the Honda F1 racing team for more than four years, and the proud maker of Edifice watches for 20. This year sees it celebrate both achievements with the release of the Casio Edifice Honda Racing Limited Edition. The EQB-1000HR-1A, as it’s known, is a statement piece with a red and black color scheme that’s just as in-your-face as the hefty 47.5mm case. If you’re the shy, retiring type, you might want to give it a miss. If, on the other hand, you’re a fan of innovative designs and high functioning tech, you’re unlikely to be disappointed. To find out more, keep reading.

The Casio Edifice Honda Racing Limited Edition represents yet another release from the partnership between Casio and the Honda F1 racing team. Although the watchmaking world and Formula 1 might seem worlds apart, the two brands actually have a surprising amount in common. Both are Japanese- based companies and both have a reputation for being on the cutting edge of technological innovations. But the interplay between the two doesn’t end there. While most of us have become guilty of relying on our smartphones to gauge the time, a racing crew still depends on the good old fashioned wristwatch – although telling the time is just one of the uses they put it to. Take the Casio 2018 Scuderia Torro Rosso pit crew watch as one example – not only can the watch be used to keep track of time, its Bluetooth and app capability, not to mention its lap timer, all work together to feed the racing crew crucial tech – the time being just part of that.

The new Casio Edifice Honda Racing Limited Edition might be all about the high-function tech, but it’s not let down in the looks department, either. With a color-scheme designed to represent the black and red uniform color of Honda F1 crews, some fancy little dashes of celebratory gold to honor the 20th anniversary of EDIFICE, a snazzy black dial and carbon case, and a red “20” on the bezel to mark the 20th anniversary, this is one very handsome watch indeed.

What’s a watch these days without a few little special features, especially a watch that’s been created specifically as a celebration piece? In the case of the Casio Edifice Honda Racing Limited Edition, there’s no shortage of jazzy little added extras, with a lap time recorder and an app with direct toggles and settings for a timer and alarm clock being just a few of them.

Bluetooth capability and some nice little flourishes of gold are all well and good, but without a good amount of power driving its movement, the Casio Edifice Honda Racing Limited Edition could kiss goodbye to its customer base. Fortunately, it doesn’t have to. The solar-powered movement at its heart is operated by a battery that can go a full 5 months without solar charge, with a very handy little indicator to show just how much battery life is remaining sited at the 6 o’clock sub-dial.

If you like big watches, you’re not going to be disappointed in the Casio Edifice Honda Racing Limited Edition. Coming in at a hefty 47.5mm, its stainless-steel case stands out loud and proud on the wrist. But if you were worried the size of the watch would make it cumbersome or uncomfortable, don’t be. According to deployant.com (https://deployant.com/review-casio-edifice-honda-racing-limited-edition/), it still manages to be supremely comfortable on the wrist despite its size, something that’s likely down to the well-designed curve of the lugs.

If you thought the Casio Edifice Honda Racing Limited Edition was fit for speed freaks and Formula One fans only, think again. As caranddriver.com rightly notes, while there are enough nods to Honda in the design to keep F1 lovers happy, it’s not so committed to the theme to lose the interest of people who couldn’t give a fig who Helmut Marko and Franz Tost are, but simply want an affordable, high functioning piece of wrist candy to add to their collection.

7. The Other Limited Edition

2020 marks the release of not one, but two special editions from Casio. Along with the EQB-1000HR-1A, Casio has also released the EQB – 1000HRS- 1A in partnership with TOM’s, the Japanese racing team it’s been proudly waving the banner for since 2013. Both editions share the same functionality, but whereas the EQB-1000HR-1A is designed in Honda’s team colors, the EQB – 1000HRS- 1A is kitted out in TOM’s – as an added tribute, it also features a sunrise image of Mt. Fuji, where TOM is based, on the dial.

The EQB-1000HR-1A isn’t entirely a shot out of the blue. The basic design is modeled on the EQB-1000 series, an analog chronograph with an 8.9mm thin case that as thekickzstand.com notes, was designed in collaboration with the Scuderia AlphaTauri Formula One racing team. The series has proved one of Casio’s most popular – the explanation, no doubt, as to why they choose it over any other piece in their collection to base their celebratory limited-edition model on.

The EQB-1000HR-1A might be Casio’s big news for 2020, but don’t expect it to stick around for long. Casio has decided to limit production to a meager 2900 pieces, so you’d better get your name on the waiting list quick-sharp if you want to get your hands on one. Availability of their other 2020 limited edition, the EQB – 1000HRS- 1A, is even more meager, with just 900 pieces in total available to buy.

As you’d expect of a brand that has built its name on producing high functioning, superbly affordable pieces, the Casio Edifice Honda Racing Limited Edition is by no means the most expensive watch in the world. But still, money is money, and if you’re going to splash out on a new piece, you’re going to want to know exactly how much it’s going to set you back. So, we’ll tell you. $330. Now that’s what we’d call a bargain.