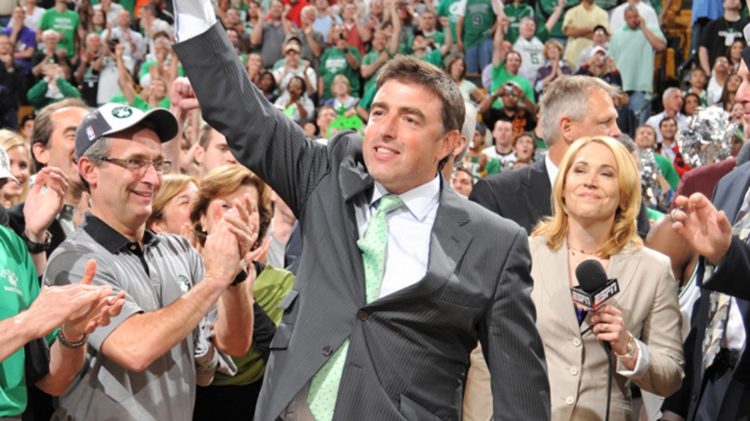 American entrepreneur Wycliffe (Wyk) Grousbeck has served as the Chief Executive Officer, governor and co-owner of the Boston Celtics of the National Basketball Association since he acquired the franchise in 2002. Not one to mince his words, Grousbeck recently hit the headlines by calling the Celtics “one of the hardest teams to love” after their somewhat dismissal performance in the 2018-19 season. But who exactly is Wye Grousbeck? Find out more with these 10 fast facts.

1. He rowed on his college team

After completing his high school education at Nobel and Greenough School in Dedham, Massachsetts, Wyc Grousbeck enrolled in Princeton University. During his time as a student, Grousbeck was a core member of the university’s rowing team, helping them row to victory at the Ivy League and national rowing championship. After graduating from Princeton with a B.A. in History, Grousbeck decided to delay entering the job market for a few years by continuing his education, first at the University of Michigan (graduating with a law degree in 1986) and later at the Stanford Graduate School of Business (where he received his MBA in 1992).

2. He founded the Boston Basketball Partners L.L.C. with his father

In 2002, Wek founded local private investment group the Boston Basketball Partners L.L.C. alongside his father, entrepreneur H. Irving Grousbeck. The group was formed with the sole intent of buying out NBA Basketball team Boston Celtics from then owner Paul Gaston. The acquisition went through that same year in a deal worth a staggering $360 million.

In 2013, Bleacher Report compiled a list of their 10 most popular NBA owners. Grousbeck (alongside Celtics co-owners Irv and Pags) managed to pull in a very respectable 7th place on the list. The publication credited the trio’s transformation of the Celtics fortunes, along with their stabilizing influence on the franchise, as the justification for their ranking. Other notable additions to the list were Dallas Mavericks’ owner, Mark Cuban, and Mikhail Prokhorov of the Brooklyn Nets.

4. He’s Chairman of the Massachusetts Eye and Ear Infirmary

In 2010, Grousbeck was named Chairman of the Massachusetts Eye and Ear Infirmary, a specialty hospital in Boston. In the years leading up to the appointment, Grousbeck had been heavily involved in the hospital’s research and educational initiatives relating to blindness and had helped fund many of its activities. Grousbeck was clearly honored by his selection, noting “It is a privilege and honor to become the Chair of Mass. Eye and Ear. This institution is at the forefront of preventing and restoring vision and hearing loss, which is a personal mission of mine that I take very seriously. I am looking forward to supporting the efforts of the extraordinary vision and hearing researchers, educators, physicians and patient care professionals of Mass. Eye and Ear”.

Grousbeck’s first marriage was to Corrine, with whom he raised 2 children, Kelsey and Campbell. The couple later divorced, but Grousbeck would find happiness again with Emilia Fazzalari, a New York businesswoman. The happy couple shared their engagement news in December 2016 at a party in thrown by Bain Capital’sPaul Edgerleyand his wife,Sandy. The pair wedded in April the following year and have been happily married ever since.

In 2013, Grousbeck expanded his empire with the launch of a new private equity firm, Causeway Media Partners LP. The company specializes in sports technology and media investment and manages a reported $340 million. Notable investments to date include Formula E Holdings, SeatGeek, and Flosports.

Grousbeck’s philanthropic activities may have seen him donate a significant amount of money to charitable causes, but his generosity hasn’t dented his bank balance too much. Thanks to his endeavors in business, the entrepreneur is worth a very respectable $400 million. Rich though he may be, he still has some way to go before making it as the wealthiest NBA owner…Steve A. Clippers beats his fortune hands down with his net worth of $22.4 billion.

9. He’s on the Board of Formula E Holdings

In 2013, Grousbeck was appointed to the Board of Formula E Holdings, the series promoters ofthe FIA Formula E Championship, a fully electric powered, international racing championship. The first championship started in September 2014 and took place over 10 cities across the world, including Miami and Los Angles. The Formula was created with the intention of generating interest in motor racing in a new generation of fans, while also promoting the electric vehicle market. “We believe Formula E is a great evolutionary step in motor-sport and a way to entertain millions around the world while driving the development of the best possible electric vehicles”, Grousbeck announced.

10. His biggest influence is his father

During an interview with Boston Magazine in 2017, Grousbeck revealed the people he’d been most inspired by. “Some of the most influential peoplein my life have been my college rowing coaches, Curtis Jordan and Gary Kilpatrick; my partners at the Celtics, including Steve Pagliuca; and, of course, my father”. Given who Grousbeck’s father is, and how closely the son’s life has mirrored the father’s, it’s little wonder Grousbeck Snr. is cited as an influence. Harold Irving “Irv” Grousbeck is, like his son, an influential and highly successful entrepreneur; he launched his first company, Continental Cablevision (later renamed Media One) in 1964, before following up its success with theStanford Center for Entrepreneurial Studiesin 1996. In 2002, he partnered up with Grousbeck Junior to found the Boston Basketball Partners L.L.C. and currently serves alongside his son as one of the Boston Celtics co-owners.