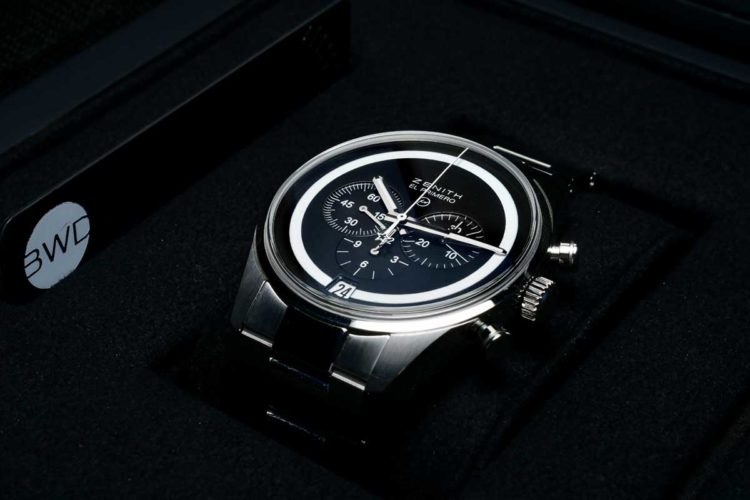 There is no doubt that some people are not willing to simply go to their local big box store, pick out a watch and wear it. Instead, they require something more, something better. Such is the case with the new Bamford x Fragment Zenith El Primero. For anyone that really wants a high-quality watch that can last for years and years and look good doing it, this is definitely worth checking out.

This watch comes mainly from the Bamford Watch Department, more commonly referred to as the BMW. It is the brainchild of founder George Bamford, and it is safe to say that this is a watch company that has had nothing short of a meteoric rise to fame, mostly in the last year. This is a relatively new company that wasn’t even on the radar a short time ago, and now they are creating one of the most sought-after watches in existence. Up until now, the company has been known for customizing high-end watches developed by other companies. This marks the first time that they have worked to create their own unique design.

Make no mistake, Bamford didn’t do it completely on their own. They are marketing partners with Dover Street Market, at least for this particular project, and they worked in conjunction with Hiroshi Fujiwara from Fragment in order to create the design. This endeavor has certainly worked out well for everyone involved, as the finished product is nothing short of stunning and orders are actually being placed for the watch, even before it can be manufactured and sent out. In most cases, pre-orders are already sold out or almost sold out. In fact, Dover Street Market is now asking the company to manufacture more of these watches because of the high demand.

The watch itself is exceptionally unique. It is encased in steel, which is not only beautiful, sleek, and powerful, but it also alludes to the high quality of the watch. The thing that truly sets this watch apart and makes it something of a work of art is the dial. The dial is black and features white embellishments so it really stands out. The hands are also white and the dial features the standard time keeping hands along with three separate hands for keeping track of seconds, all laid out separately in different time fragments. It creates this unique triangle of white hands in front of white embellishments on a black face and it is just breathtaking when you look at it. The date is also included at the very bottom of the dial, just as the steel starts to encase it.

There is no doubt that this watch is stunningly beautiful. For people that appreciate a high-quality watch, there are few products in existence that are capable of competing with this one. The truly great thing about it is that the quality is as profound as its appearance. This is not a watch that was designed on a whim, but instead something that a great deal of thought was put into. The idea was to create a watch of exceptional quality and that is exactly what the company has done. It has also managed to somehow make that quality visible to the naked eye, so that you can practically see the workmanship that has gone into this watch the minute you look at it. It is almost like looking at a fine automobile and realizing that very few people indeed will ever actually get to lay their hands on it.

This is not a watch that will be mass-produced. The intention was to limit its production to very small numbers, although the company is currently considering producing a few more of these watches because demand is actually much higher than they had anticipated. Even if they go back and produce more of these watches, you can rest assured that the number will not be very high. This is such a high-quality product that it would be virtually impossible to produce it in large numbers. If you are an individual that appreciates having a high-quality watch that also serves as a truly stunning fashion peace, this is something that you should definitely not allow to pass you by, but you have to act quickly before they are all gone.