Bovet is known worldwide as one of the best and oldest brands of luxury watches. The company began in 1822, and soon became well-known for pocket-watches intended for the Chinese market. Plus, they pioneered beauty in watchmaking – Bovet watches were some of the first production watches to make use of skeletonized views and intricately-decorated movements. This manufacturer was one of the earliest to make use of a second hand as well. And, of course, many Bovet artisans are women. This is highly unusual for European luxury watchmaking companies.

Bovet has always been known for breaking boundaries and going beyond the norm. So, it didn’t come as much of a surprise when they released the breathtaking Récital 18 Shooting Star. This watch has a myriad of complications, and is one of the more beautiful watches released within recent years.

This watch makes use of a special set of representations of the Earth and its hemispheres that was custom-designed by a cartographer – enabling the entire planet to be viewed at once. The rightmost depiction of the planet is the result of this special design. This part of the watch features a “hemisphere hand”. It travels by 15 degree jumps around the planet, while the city indicator flips to one of the 24 cities that have been designed into this watch.

On the left side of the watch, there is a moon phase indicator. This includes the phases for both the northern and southern hemispheres. The dial is read in a simplistic manner – the rings will hover above the engraved sky, representing the moon’s current phase. This is an incredibly accurate depiction of the moon – in fact, the movement won’t need to be adjusted until 122 years from now.

The top of the watch is where you will find the time-telling portion of the Bovet Récital 18 Shooting Star. The time is depicted via a jump hour system. The hour is displayed on the bottom, while the minutes are displayed above on a retrograde scale. Most of the hands and engravings on this watch have been lumed. This causes a much different viewing experience, particularly in the dark where the luminescent paint stands out the best. This is a bit of a departure from older Bovet designs, as they wouldn’t have generally used the luming process.

This watch uses a highly-customized action. It must also make use of several complications to ensure that each feature is displayed properly. The watch also requires most spring tensions to be perfectly calibrated with one another.

In fact, Bovey even invented their own correction method – known as “constant force” correction – to ensure that their watches performed at the top of their game. They also filed a patent for this method. Essentially, each user will apply substantially different pressure when they operate the corrector. What Bovey does is take that pressure and stores it in a spring, only allowing the energy to be transmitted after the corrector is released.

This ensures that excess pressure will not affect adjustment and long-term reliability. This system is a solid conglomeration of different types of actions and complications that marks Bovet’s ingenuity when it comes to creating new and unique watches. Essentially the entire movement of the Bovet Récital 18 Shooting Star is customized. Every new complication that they included in this watch required a different type of gearing solution to ensure accuracy and reliability of the watch. Plus, the watch has 5 days of power reserve – plenty to ensure that each complication stays running without winding it up.

The best part about this watch is that you can always see the movement in action. This watch is highly skeletonized, and has a clear dome and caseback that show every one of the custom gears as they spin. 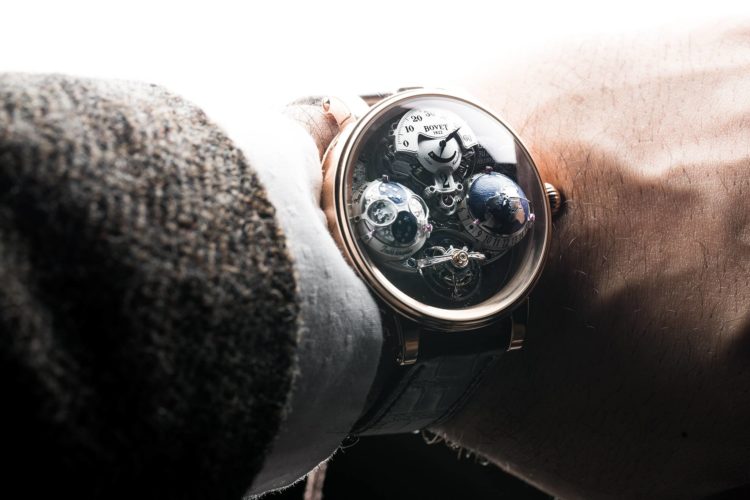 This watch will come on a black leather strap. It is a perfect complement to the colors and overall design of the watch, as it doesn’t take your eye away from the timepiece itself. Instead, it frames it in a way to make everything else more distinguished. Plus, in the dark the strap will be invisible – only the lumed hands and engravings will be able to be seen, for a pretty cool effect.

Overall, this watch from Bovet is a great choice for an affluent collector. It has character, style, and class. Plus, it will retain its value quite well due to the impeccably designed mechanics behind the piece. Of course, the watch will cost around $300,000. So, if you want to buy one of these Bovet Récital 18 Shooting Stars (of which only 50 were made), you better start trying to come up with the cash before they are all sold out. It is surely worth it for such a unique and well-made piece.