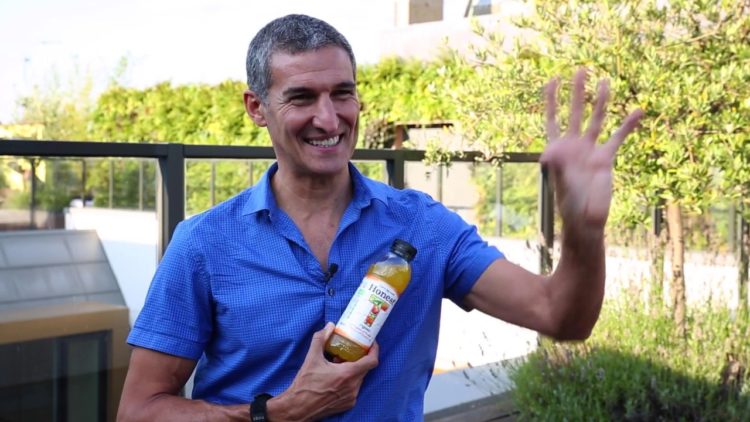 Businessman Seth Goldman grew to prominence as the co-founding CEO of Honest Tea, an organic tea company based in Maryland. The business was founded by Goldman and his business partner Barry Nalebuff after Goldman developed the idea while at business school. The emergence of Honest Tea’s organic, healthy, fair-trade teas in a market over-saturated with heavily sweetened, ethically dubious beverages proved a hit; within less than 10 years of its inception, the company was turning over a revenue of $13.5 million and retailing one and a half million cases a year. Its success attracted the attention of The Coca-Cola Company: in 2008, the corporation purchased a 40% stake in Honest Tea for $43 million, eventually acquiring full control in 2011. After the buyout, Goldman continued to work for Honest Tea as its CEO, before finally stepping down from his position in 2015. To find out what’s he’s been up to since (along with some other little-known tidbits), keep reading.

1. He developed his taste for tea in China

As the founder of a company specializing in tea, you’d expect Seth Goldman to have an appreciation for its finer qualities- and you’d be right. Goldman developed his taste for the popular beverage while spending time in Russia and China, two cultures known for their tea-loving ways. While Goldman had, of course, drunk the occasional tea in the US beforehand, he’d always found it overly loaded with sugar and too sweet for his taste. His experiences in China and Russia helped show him what tea could be in the absence of the sweet stuff, ultimately prompting him towards the creation of Honest Tea.

2. He continues to be active in Honest Tea

Despite stepping down as its CEO in 2015, Goldman continues to be involved in the activities of Honest Tea through his position of “TeaEO” emeritus. Asked by Forbes why he continues to stick around despite The Coca-Cola Company now owning controlling interests, Goldman answered, “I am still around because these are the days I used to dream about during the first ten years. This was the dream, and to be around and make sure it does not get messed up provided me with a double benefit.”

Since testing out his entrepreneurial skills at Honest Tea, Goldman, who resides in Bethesda, MD, has taken his business acumen in a new direction by launching a new kind of company entirely; a non-profit incubator and community outreach program that’s helping build a sustainable, socially impactful local economy in his home town. Since founding “Bethesda Green” in 2007, Goldman has been an active member of its board of directors and a vocal advocate for its mission statement.

In 2013, Goldman and his Honest Tea business partner, Barry Nalebuff, committed their story to paper with the autobiographical “Mission in a Bottle: The Honest Guide to Doing Business Differently — and Succeeding”. In a comic book style, the pair remembered how they first got together to found the business, and shared their words of wisdom with any budding entrepreneurs looking to achieve the same success.

5. He likes to keep a clean house

The first thing Goldman does every morning as part of his daily ritual? Make his bed. The second? Get on his bike. “It is the best way to clear my head, get the blood flowing and process whatever has happened the day before. By the time I’ve got to the office I’m in a good place,” Goldman told YScouts.

6. He was an early investor in Beyond Meat

Recognizing the social and gastronomical shift towards a healthier, more sustainable way of eating, Goldman decided to plunge into the world of veganism– at least to the extent of investing in it (when it comes to his own eating habits, he still allows himself the odd dairy or egg-based treat). The company he chose to offer his talents, and funds, to was Beyond Meat, a Los Angeles based producer of meat substitutes that’s been doing it best to convert the world’s carnivores to a plant-based diet since 2009. By the time the company launched its first public offering in May 2019, Goldman held 2% of its shares.

7. His favorite Tea is Tulsi

Thanks to his years at the helm of Honest Tea, Goldman knows a thing or two about teas. His personal favorite is Tulsi, an herbal, basil leaf variety. His passion for Tusli doesn’t just owe to its taste; he’s also inspired by its backstory. “Tulsi was primarily grown for garlands that get worn once and are then thrown away… selling it as a food product has helped these farmers make a sustainable living,” he told Forbes.

8. He’s a board member of Ripple Foods

Continuing in his endeavors to turn the world onto a healthy, plant-based lifestyle, Goldman is an active member of the board of Ripple Foods, a producer of dairy- free milk alternatives. In March 2019, Goldman gave a talk at the Yale Centre for Business and the Environment to discuss his role in the company, and expand on his thoughts about the trend towards sustainable lifestyles and diets.

9. He hasn’t let his millions change him

Despite becoming a millionaire in the years since founding Honest Tea, Goldman remains much the same man as he always was… as does his co-founder of Honest Tea and long-time friend, Barry Nalebuff. “I’m happy to say I live in the same house, I’m married to the same woman and I’ve been a professor at Yale for 25 years,” Nalebuff told the Washington Post. “I note that Seth has the same wife and house, too.”

10. He attributes his success to the Red Sox

It may be unusual, but Goldman attributes much of his success in business to being a lifelong fan of the Red Sox, the trials and tribulations of which have proved great training ground for learning to overcome the challenges of business. “The biggest single trait you’ll find among entrepreneurs is a sense of optimism – and any seasoned Red Sox fan has to have that, too,” Goldman told The Boston Herald.