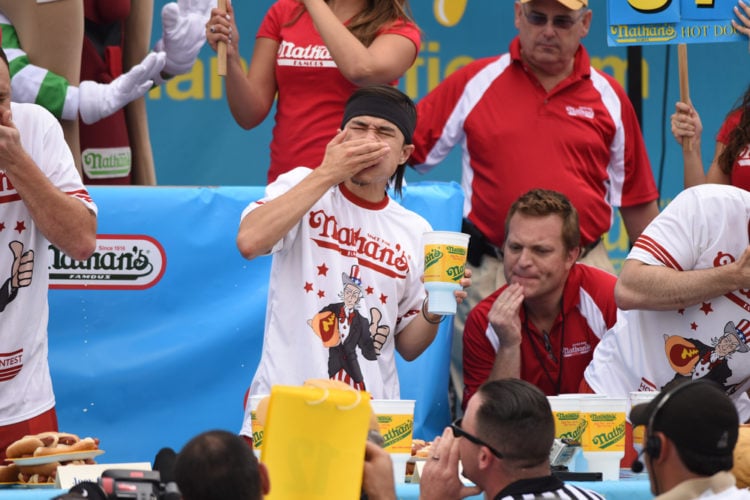 Competitive eating isn’t for everyone, and it isn’t exactly the easiest hobby to get into or keep up with. There’s a misconception that competitive eating is a modern sport, but in fact it’s been around since 1916. For decades now, competitive eating athletes have been training their minds and stomachs to intake incredible amounts of food at such a short span of time. It’s almost impossible to think of, yet competitive eaters such as Matt Stonie make it seem so easy. The 5 foot 8 inches, 130lb athlete found his fame when he defeated the sport’s household name—Joey Chestnut—in a 2015 competition. Who would have ever imagined that you could have a net worth of $5 million by eating exorbitant amounts of hotdogs? That’s certainly Stonie’s current net worth, but it took more than just hotdogs for him to amass that kind of fortune. Here’s a closer look into how Matt Stonie, competitive eater, achieved a net worth of $5 million.

Born on May 24, 1992, the 28-year old California native is of Japanese, Lithuanian, and Czechoslovakian descent. He has lived in California his entire life. Matthew Kai Stonie attended Evergreen Valley High School and is an alumnus of Mission College in Santa Clara. The competitive eater also goes by the name of Megatoad, which is derived from the “Toad” character from the Super Mario Bros. franchise.

Stonie’s career started when he was 18 years old. Although that may be a late start in most sports, it wasn’t for competitive eating. In fact, Stonie was the youngest member of Major League Eating Organization by the time of his professional debut.

Stonie’s won his first competition in 2010 during a lobster roll-eating contest in Hampton Beach, New Hampshire. Stonie vacationed there with his family, and the competition just happened to be something he was interested in doing. By the time he won the competition, the interest had grown into a hobby. He was still a college student at the time, and he already had his sights set on dethroning famed eater Joey Chestnut. His win was totally unexpected given his slight build. That was his first amateur title, but that propelled Stonie to pursue membership with the MLE Organization in order to compete in sanctioned competitions worldwide and get ranked. Soon enough, Stonie was ranked sixth in world.

It was an unexpected turn of events for Matt Stonie’s life, especially since he was actually studying to become a dietitian. However, the hunger for winning and his competitive nature drove Stonie to turn his hobby into an actual career. Being that he’s half Japanese, Stonie’s favorite foods are actually sushi and curry—fairly healthy options. Stonie’s not particularly fond of eating the greasy foods that often come with competitive eating, but he is willing to chow down on absolutely anything for the sake of winning and ranking up.

It has actually become a science for Stonie, who uses his knowledge on nutrition to help prep his body for competition. Part of his training includes being careful what he eats when not competing in order to stay efficient once a competition season begins. He’s got the support of his family and friends, who all enjoy watching Stonie perform and eat as much as he could during contests.

Stonie defeated Chestnut in 2016 during one of the world famous Nathan’s Hot Dog Eating Contests in Coney Island. Stonie consumed 62 hotdogs while Chestnut ate 60. It was a huge moment for Stonie and a big shock for all that watched considering that Chestnut held the victory title for nine years previous. That win alone put $10,000 into Stonie’s pockets. Since his professional debut in 2011, Stonie has competed in a ton of eating contests, and he has held over 15 world records to this day. He has traveled worldwide and continues to earn money through competitions.

However, a huge chunk of Stonie’s net worth doesn’t come from his winnings. Stonie has a popular YouTube channel that he has maintained since the beginning of his professional career. The channel currently has 12.1 million subscribers—a feat of its own, and his videos average millions of views. His channel is maintained with the help of his brother, and it gets Stonie a large amount of his earnings from sponsors and advertising. His Superbowl video from 5 months ago had about 13.9 million views to date, and that’s exactly the kind of viewership that brings in the big bucks. Stonie and his brother regularly upload videos to their YouTube page, so that income stream is steady and solid.

Stonie may have found success and fame through competitive eating, but that hasn’t changed who he is as a person. In fact, he has used his success to fund various charities close to his heart. According to Stonie, the Major League Eating Organization donates a good amount to charity, and he is very much proud to be part of such company that cares. It helps the athlete also considering that all of the food he consumes on a daily basis is written off as a business expense for tax purposes. That’s probably one of the best benefits of being a competitive eater. It saves him a ton on his grocery bills, and it also allows him to set aside more for charity.

Matt Stonie is still young and probably hasn’t reached the peak of his game just yet. He continues to train every day and is poised to break even more world records. For the rest of us, we are what we eat. But for Stonie, what he eats—and how much of it—is really just a part of his job.