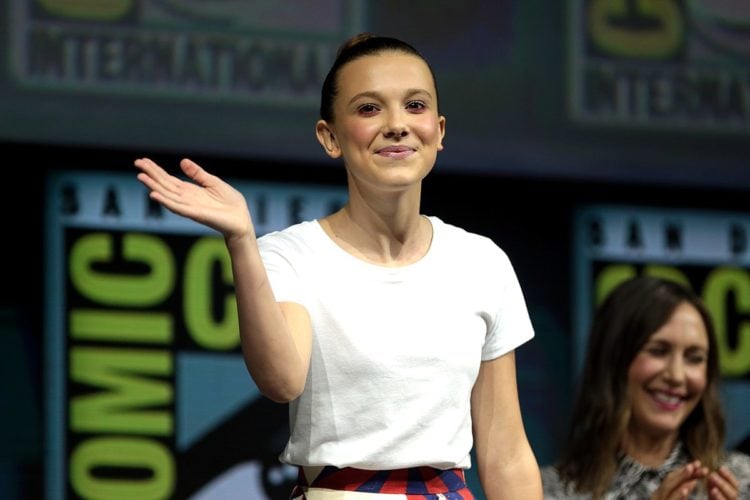 From the moment Stranger things aired, people have been going crazy for Millie Bobby Brown. That makes sense. After all, she’s a very talented young woman, and frankly, the show is outstanding. It wasn’t her first role, though it’s definitely the most popular so far. Millie, who is just fifteen, started acting in 2013, and she’s managed to keep up the momentum ever since. Along with that work comes a paycheck and more money than most kids could ever use. In Brown’s case, she’s amassed millions, and she’s not even old enough to drive a car yet. Here is how Millie Bobby Brown achieved a net worth of $3 Million.

Millie in the News

Getting the public’s attention is one way to make a fortune, but when you’re a young and rising Hollywood starlet, it’s not always good news. Millie recently became embroiled in an argument between two other Hollywood names when she posted a picture of herself in a leopard printed minidress. Paris Hilton, who’s known for her fashion sense, commented on the image on her Instagram feed. She called Mille “Hot.” If you know anything about Paris Hilton, “That’s Hot”® is her catchphrase. She’s been using it since she was on The Simple Life or possibly before. Moreover, she’s trademarked the phrase. Paris’ trademarks are no joke. She holds over twenty of them. However, using her trademarked catchphrase, in this case, caused some controversy because of Mille’s age.

Westworld star Evan Rachel Wood found the comment offensive. She defended the child actress by responding to Paris’ comment stating that “She’s 15.” Clearly, Evan feels that calling a teenager ‘hot’ is a very sexualizing comment. She’s not wrong, and we can respect a rape survivor like Evan who wants to defend young women. The flip side of that coin is that it’s not really up to anyone, except perhaps her parents, what Millie wears. We don’t like to weigh in on the she-said-she-said issues, but we’re pretty sure that the bright young star knows enough about the world to realize whats going on. This isn’t the first time Millie has stirred up a little controversy over her clothing choices.

A bodycon snake print dress picture also got a lot of attention. People were posting comments about her outfit that indicated they felt she is growing up too fast. Some of the comments are quite crass. Millie responded by telling people that if they dislike a picture, then they’re welcome to keep scrolling. Interestingly, the snake print dress was long enough to come below her knee. It seems like a whole lot of drama over a young lady who is happy with her own body and how she looks in a beautiful dress. We aren’t sure if the star is trying to be controversial or if she’s feeling empowered. However, she certainly knows how to stay in the news.

Mille is only fifteen, but she’s been an actress for six years. She started on the series Once Upon a Time in Wonderland (2013), where she played the part of Alice’s younger self. If that name seems a little familiar, it’s because the series was a spinoff from the long-running Once Upon a Time franchise. Alice and wonderland have always been among the most beloved fairytales, with the story being retold more ways than we can count over the years. Getting cast, even just briefly in a spinoff, for a major series is a great way to get attention in Hollywood. Millie was adorable and made a great Alice.

For her next act, Millie was picked up as a regular on a show that we think was canceled too soon. Intruders (2014) was a bizarre show about people who had found a way to come back after death by possessing the bodies of others and battling it out with them for possession of the body. Millie took on the role of Madison, a nine-year-old girl who had the incredible strength to battle one of these intruders and eventually win. After Intruders, Millie went on to do cameos in several well-known shows like NCIS. She’s been in at least three music videos, including one for Maroon 5’s Girl Like You. We don’t have exact dollar amounts on what she made for those performances. However, Dreshare has reported that at one point, her family was bankrupt as a result of helping her pursue her career. Millie’s parents and three siblings must have had a lot of faith in her. They moved from Spain to England and eventually to the USA so she could pursue her theatrical dreams. The good news is that things worked out for the best, and now the family is well off because of her efforts.

Being Eleven and More

Stranger Things was Millie’s break-out role. She was cast to play the part of the mysterious “Eleven,” a psychic child who escaped from a lab and is found by a group of friends who are looking for another child who is lost. Eventually, her character is given the name Jane, and she helps the group find their lost friend. By season two, they’re dealing with a return to normality, in so far as that’s possible after the bizarre and horrifying experiences they’ve been through. Stranger Things is an homage to the 1980s and horror films of the time. Casting Winona Ryder as the mother of the missing boy is an homage all on its own, but this isn’t about her.

Millie makes around thirty thousand dollars per episode, which has contributed substantially to her wealth. Whether she was able to save money from her earlier work is unknown. In addition to her Stranger Things income, Millie has also been cast for two upcoming Godzilla movies and Enola Holmes. Doubtless, those performances have also come with a salary, which adds to her income. However, we don’t have information at this time on how much she was paid for those jobs.

When it comes to ‘making it’ in Hollywood, there are actors and actresses who struggle for years to get their first part, but not Millie. She has managed to use her talent to create a substantial income since she was nine years old. We expect great things from this rising star and will be watching with interest no matter what she wears. Hopefully, Millie has found her time in Hollywood empowering and will continue to perform for many years.