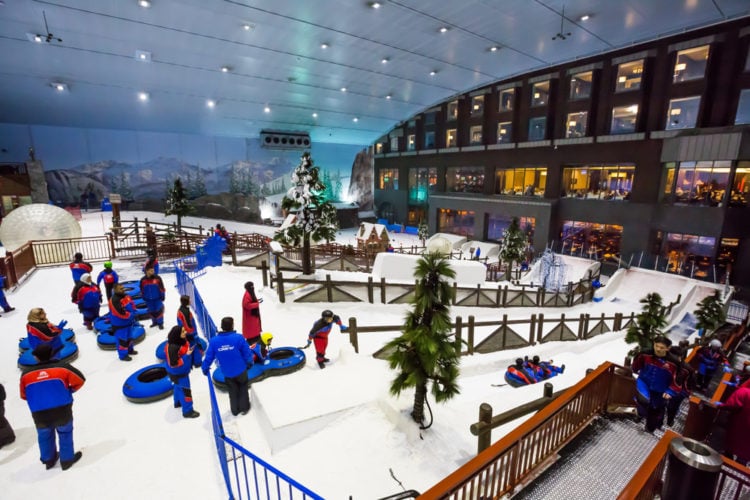 The end of the snow season used to mean having to hang up your skis for another year. But times change. These days, you can hit the slopes come spring, summer, or winter thanks to the ever-growing number of indoor ski resorts. If the snow’s gone but your desire for some top-notch slope action hasn’t, these are the 10 best indoor snowboarding and ski centers to make a beeline for.

Harbin doesn’t seem a natural fit for an indoor ski resort – home to the Harbin Ice and Snow Festival, it already draws millions of people every year thanks to its abundant quantities of the white stuff. But apparently, you can never have enough snow, and at Wanda Indoor Ski and Winter Sports Resort, it’s the finest kind money can buy. Spread over 860,000-square-feet, the resort offers visitors the chance to take a few lessons before hitting one of the six different runs. If you get bored of skiing in the snow, play with it instead at the very pretty and very fun snow castle.

if skiing down sand dunes doesn’t appeal, Dubai has an alternative. Named as one of the best indoor ski resorts in the world by mountainwarehouse.com, Ski Dubai is more Austrian alps than Arabian nights. Visitors can expect a functionals chairlift, five ski runs (including the only indoor black run in the world), a freestyle zone for the pros, a snow park for sledding, forests of evergreen trees, toboggan runs, inflatable zorb balls to bounce around in, a handful of cafes serving up steaming mugs of hot chocolate and warming bowls of soup, and, somewhat bizarrely but kind of delightfully, real, live penguins.

If you want to put your skills to the test on the world’s longest indoor run, head for AlpinCenter in Bottrop, Germany. Once you’ve mastered the run, try your luck on the toboggan track or test your nerves with some indoor skydiving. This being Germany, there’s also a beer garden to relax in – by all accounts, it’s the highest beer garden in the Ruhr area. We’re not sure if anyone’s actually measured it to verify, but the views over the surrounding landscape are extraordinary enough for it not to matter.

You don’t have to search too hard to find real snow in Scotland, but there’s a lot to be said for skipping the mountains and heading to Snow Factor in Glasgow instead. According to visitscotland.com, the facility has something for everyone – with the longest slope in the UK, not to mention a host of activities ranging from sledding to ice climbing, skiing, and snowboarding, we’re inclined to take them at their word. Key features include a Bavarian-themed restaurant, an ice slide, a festive grotto, 4 ski lifts, an ice climbing wall, ski lessons, and even a very swanky ice bar. Located just 10 minutes from Glasgow city center, it’s the ideal place for some wintery fun.

As thepointsguy.com says, the Snow Centre in Hempel Hempstead caters to all levels of skiers and snowboarders with a range of slopes and freestyle areas. Along with the slopes, slides, and sledding areas, there’s also a very charming Alpine-style lodge that does a fine line in schnitzels and strudels. The slopes are maintained at night, so get there early if you want to enjoy the snow at its best.

Like the idea of testing your wits against one of the longest indoor ski slopes in the world? Then head for Snowhall in Amnéville, a top-notch ski center that not only boasts an incredibly impressive (if slightly daunting) 2000 feet slope, but also offers a snowpark, a beginners slope, a sledding run, a tubing zone, and a big track. If you want to brush up on your skills before hitting the slopes, private and group instruction is available.

In 2019, the US welcomed its first indoor ski resort in the shape of the Big Snow American Dream in East Rutherford, New Jersey. The climate-controlled building boasts snow depths of two feet, an average temperature of 28 degrees Fahrenheit, and more fun and activities than you can pack into a month of Sundays. With beginner, intermediate and advanced runs, it caters to all levels – there’s even a freestyle terrain park where experienced skiers can practice their tricks. If you left your snowboard at home, don’t pain – the facility offers visitors the chance to rent all the gear they’ll need at a very reasonable price.

There’s more chance of hell freezing over than a single flake of snow ever falling over Singapore, but that doesn’t mean you can’t enjoy some first-rate winter fun on the slopes here. As The Smithsonian Magazine writes, Snow City is like a Disney-esque version of the Arctic, complete with cartoon Inuit characters, powdery snowflakes, 150 tons of snow, an igloo, a playground, a bumper car ice ring, numerous ski runs, and a whole lot more besides.

You’d never guess you were in Europe’s flattest country from the five incredibly impressive ski slopes at SnowWorld in the Netherlands. The resort is open till 11 pm each day, making it the perfect destination for hardcore skiers and snowboarders who’d rather tackle the slopes than slump in front of the TV at night. If all the activity gives you an appetite, you’ve got a choice of five restaurants to choose between. In the summer months, there’s also a very fun climbing park to take advantage of.

Auckland’s Snow Planet caters to everyone. Experienced skiers will find the rugged, obstacle-laden terrain an incredibly rewarding experience. Newbies can practice their skills on the beginner slope or take advantage of the First Timer Package, which includes a 50-minute private lesson, a two-house snow pass in the beginner area, and all the gear they’ll need for a day on the slopes. Kids will love building snowmen, tobogganing, and having snowball fights at the Wonderland Alpine-esque village. If you’re looking for the kind of destination the whole family can enjoy, this is it.