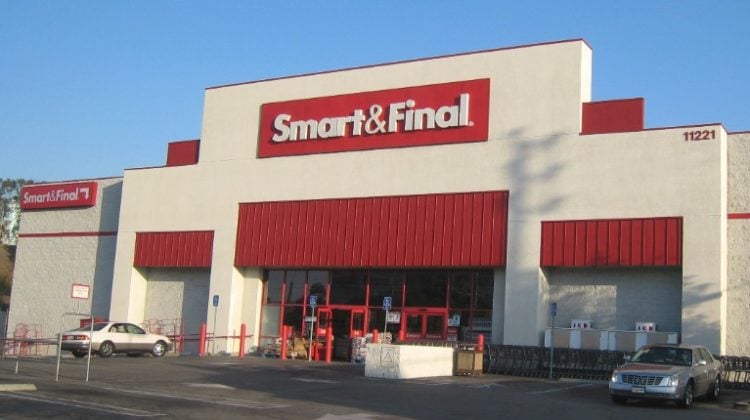 For a business to survive for more than a century and a half, it must have visionary leaders who refuse to back down even when things get tough and always stay ahead of the competition. That is what Smart & Final is all about since its founding in the 19th century, and it keeps going strong. With the recognition that people are increasingly becoming health-conscious and seeking products that are more environmentally-friendly, Smart & Final has been able to have a product offering appealing to the customers. However, there is more to the company than just the dramatic expansion that has continued to provide employment opportunities to the growing job market. From 1871 till now, here are a few things that might interest you about this giant in the food service industry.

1. Origin of the name Smart & Final

Smart & Final are names of two people who once owned the company back in 1914. J. S. Smart and H.D. Final bought Santa Ana Grocery Company, which had been founded in 1912. The company sold grain and feed to local farmers, but when Smart and Final bought it in 1914, they changed the name to Smart & Final Wholesale Grocers. The “Wholesale Grocers” inclusion was because Smart had involved himself with wholesale grocers in the region.

2. The birth of Cash and Carry

Smart & Final made sales worth $10 million in 1919, but in 1920, the competition became fierce as other grocers ventured into business. By then, the company relied on clerks to fetch goods for customers. To maintain the profit margins, Smart & Final decided to replace those clerks by having the customers get products for themselves, hence the name “Cash and Carry.”

3. The first merger ever

Although Smart & Final started operating under the name in 1914, the fact that it merged with Haas, Baruch & Co, takes its history back to 1871. In 1871, Herman W. Hellman, Jacob Haas, and Bernard Cohn came together to form a business going by the name Hellman-Haas Grocery Co. In 1889, the patriarch of the Haas family and original owner of the Haas building, Abraham Haas, partnered with Jacob Baruch to buy Hellman-Haas Grocery Co. which they changed the name to Haas, Baruch & Co. The company reached $2 million sales in 1895 and continued to expand throughout the Southern California region. In 1953, Smart & Final and Haas, Baruch & Co. merged, and the company continued to make other mergers as well as joint-venture, acquisition and spin-off.

4. The introduction of Smart & Final Extra!

In 2008, Smart & Final sought to adapt to its customers’ evolving needs by introducing Smart & Final Extra! The store, therefore, added other items such as frozen goods, organic and natural products, oven-roasted chicken, bulk food and many others, to its range of product offering. The concept of Smart & Final Extra! was an upgraded version of Smart & Final since the stores are not only larger but they also offer customers the convenience of not having to buy in bulk by providing smaller items too.

Smart Foodservice Warehouse Stores is the result of rebranding Smart & Final’s division, Cash & Carry Smart Foodservice. Derek Jones, the President of Smart Foodservice Warehouse Stores, revealed that they renamed the store to reflect better the mission of the business, which is selling quality ingredients as well as restaurant supplies simply and conveniently in a warehouse manner. Other reasons that fueled the rebranding were to reflect the more than 60 years of evolution in catering to the foodservice industry and to clarify to both current and future customers the services and products which the warehouse offers.

In August, 2017, Smart & Final launched its own delivery website, which is powered by Instacart. The site aims to offer online customers the opportunity for searching, exploring and ordering products directly from the store. Customers can buy whatever they desire by filling their virtual carts. The main benefit of using the app as the Chief Marketing Strategy Officer, Eleanor Hong, explains is the convenience. Customers also get to enjoy same-day delivery service, with some deliveries taking even less than an hour, and the same low prices they would get if they shopped in person.

Now that almost everyone has a smartphone, Smart & Final took advantage of this by launching the Shop Smart & Final App in April 2018. The mobile app is available on Apple App Store and Google Play store, for iOS platforms only. With the app, you can get real-time updates on your order since you receive push notifications when each stage of your order is completed. Once the order transaction is complete, you can continue tracking it until it reaches your doorstep. Other benefits include direct communication with personal shoppers, same day delivery service and also being able to change your order before making any payment.

Smart & Final, operating under SmartCo Foods brand, ventured into Denver in June 2010 by opening its first store on Parker Road, customized for the Colorado market. By November 2010 it had opened four other stores, but then it announced it was closing down all the five stores and exiting the Denver market. Although SmartCo Foods said the closure was due to the failing market which they saw no improvement, another reason could have been due to the negotiations it was conducting with Sprouts Farmers Market. In February 2011, SmartCo Foods acquired Sprouts Farmers Market in Colorado, in 9 locations.

Smart & Final commits itself towards giving back to the community and established Smart & Final Charitable Foundation which supports non-profit organization to provide better health, education, team sports, and youth development as well as eradicating hunger. In 2018, Smart & Final launched an in-store charity program aimed at collecting pasta-related items and raising money for the 8th annual Pastathon. The Pastathon, organized by KFI AM640 for Caterina’s Club, is a fundraising event which provides affordable housing assistance, warm meals and hospitality training for the homeless youth and low-income households in Southern California.

Being on the Forbes list demands that you outshine the rest in a world that is overly competitive. The largest private companies list, established in 1985 has seen most of the world’s giants repeatedly ranked while others have dropped after one ranking. Smart & Final made it to the 30th Forbes list of the largest private companies in 2014 which featured companies that had at least $ 2 billion in revenues.It ranked the 144th, out of the 221 companies, after acquiring $3.2 billion in sales. Unfortunately, it did not make it on the following year’s list.

In June 2014, Smart & Final filed for an initial public offering (IPO) where it hoped to raise $100 million, although the figure had not factored in the registration fees. As it filed, the company did not reveal which stock exchange it would trade in, nor the number of shares it would sell. In September 2014, it started trading on the New York Stock Exchange under the ticker symbol, SFS, after making its IPO of nearly 13.5 million shares. The public sale began with a share going for $12, although the price went up to $13.42 but closed at $12.01. The company aimed to use the proceeds of the sale in reducing the debt.

12. Challenge in having Fresno store

Smart & Final wanted to build a store in Fresno, on the Southwest corner of Clinton and Blackstone avenues, near Ratcliffe Stadium and Fresno City College. However, a dispute arose between the company and City Hall regarding whether the development project should have two or one smaller building fronting Blackstone. Unfortunately, they did not reach an agreement. Things looked up for the company when Savemart announced it would close, and Smart & Final took advantage of the opportunity by moving into the building which happens to be in the exact location they wanted, Blackstone and Clinton Avenue.

On 20th February 2007, Apollo Management entered into a contract with Smart & Final to acquire it for around $812.9 million. The terms and conditions of the merger dictated that the Shareholders of Smart & Final would get $22 for each share of the company’s common stock. Moreover, Apollo agreed to pay for the 55% stake that Smart & Final had in Groupe Casino, a French retail outlet.

A company’s brand is essential in helping customers distinguish it from the products of its competitors, thus creating customer loyalty and increasing sales. Smart & Final allows each category of its products to have their own identity through unique designs. It, therefore, revamped its First Street private brand with a new look, courtesy of Voicebox Creative, a packaging design agency. The refreshed look is meant to reflect the company’s commitment to community and quality. The change also portrayed the transition of Tradewinds Spices & Seasonings to First Street. The First Street product portfolio rakes significant profits for the business since it accounts for 75% of private label sales of Smart & Final.

16. Introducing Sushi to the product offering

When Smart & Final Extra! opened a store in Coronado at 150 B Avenue, it promised the residents that it would have sushi on the menu soon and a month later in March 2006, they kept their word. Sushi is a local favorite, and a sushi chef is available daily from 9 am to 6 pm to prepare fresh and restaurant-quality sushi. Among the choices the customers have are Dynamite Roll, New York Crunch Roll, and Kikka Sushi Tuna Roll. Customers can even buy sushi and other sushi-products online and have it delivered the same day.

companies have different plans for expanding with some going for merging, joint ventures or even franchising. Smart & Final has become a household name thanks to its expansion strategy which involves having many store locations. It has more than 300 warehouse stores in the Western United States while 15 are in northwestern Mexico. Currently, any store opened or acquired goes by the Extra! Banner and it is even converting the Smart & Final stores into Extra!

In 2015, Smart & Final announced through its website that it was revamping the Sun Harvest Brand. The brand has over 100 SKUs cutting across categories such as cleaning products, dairy, paper, grocery, and meat. All products fall under three types of products namely “organic” meaning they are grown, packaged and meet the strict USDA standards, “earth-friendly” which are either made without using chemicals harmful to the environment or from recycled material and “simply” which are products that are 100% natural. The new design was about communicating to the customers that the products were natural as depicted by the yellow and green, representing the sun and leaves and grass respectively. The senior vice president added in the revamp announcement that the products would never contain artificial ingredients.

In Nov 2015, Smart & Final got bankruptcy court approval to purchase 32 grocery stores of Haggen Food and Pharmacy, for $68 million. Haggen had begun expansion earlier on in the year, but it did not go well causing it to file for bankruptcy in September 2015. Consequently, Haggen closed down all its stores except 37 in Oregon and Washington.

Smart & Final is Los Angeles Dodgers’ official grocery partner, and the Dodger Stadium will have the brand signage throughout. It sponsored the 14th Annual Thanksgiving Turkey Giveaway where it presented food donations and over 1,200 turkeys.

Smart & Final disclosed that partnering with Dodgers is part of the continuing efforts to prioritize the community food and people in its shopping model.