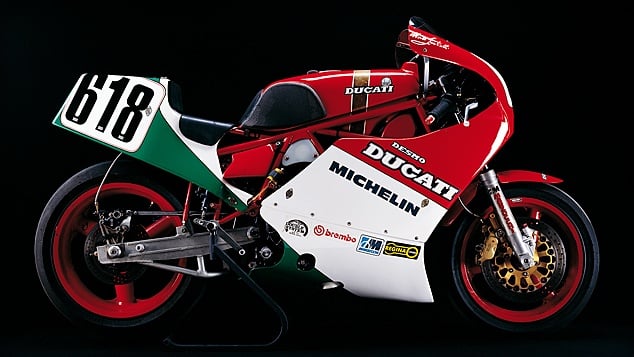 The 1980s represented a time of change as well as development for the Ducati motorcycle brand. There was a change in the management as the Castiglioni brothers joined as a part of the ownership. The brothers were racing fans as well as bike enthusiasts who had big plans and a grand vision for the company. The changes were positive and this era was an amazing time for loyal fans of the brand, and the following five best models were produced during this time. The Ducati 900 Super Sport was an exciting model that was first introduced to the world in 1978. It was built for true bikers who love the feeling of power and speed. Those who insist on stylish sportiness found it to be the perfect combination with agile handling and the ability to tear up the track and then be at home on the road. This beauty remained in production until 1983. It was powered with a 4-stroke ninety degrees V-twin engine that cranked 72 horsepower and delivered a top speed of 220 km per hour. It was matched with a 5-speed transmission, air cooling, and a carburetor fuel feeding system that featured two Dell ‘Orto PHM carburetors. The seat was made for comfort with a narrow build that had just the right amount of padding without going overboard. It was the solution for riders who were looking for a multi-use and versatile bike to satiate their hunger to have it all. This year was the final production run for the 750 F1 Special series. This bike goes down in the history of Ducati as a European race winner, including Barcelona’s famous “24 Horas de Montjuich.” The Montjuich marked the end of an era for the brand and it was an important one that took the series out in grand style. It was first introduced in 1986 truly was a special edition. It came at a higher cost because of its rarity, which makes it one of the most prized collector’s pieces for the 1980s era. Each bike came with a special numbered plaque that was placed on the fuel tank. This was a distinct bike that was easily recognized at a glance, but riding gave you the feeling of power, speed, and sportiness as it was the fastest FI in the entire series. It was powered with a four-stroke twin-cylinder 748cc engine that cranked 95 horsepower paired with a 5-speed transmission. The Ducati 851 was the bike that Lucchinelli rode to victory in the 1987 “Battle of the Twins.” It made its mark in the history of the brand with a display of power and agility. It was the dream of the Costigioni’s and their vision for taking the brand all the way in racing. They made a few improvements to its personality with a Tricolore version in 1988. The efficiency of the 4 valve engine was an innovation that earned the company kudos throughout the world. The original of 1987 was followed up with an S model that yielded yet more improvements, but enthusiasts are enamored of the 1987edition for their collections. This bike was powered with a 4-stroke L-twin cylinder 851cc engine that cranked 128 horsepower with a top speed of more than 280 km per hour. It was matched with a 6-speed transmission. This bike represents a period of evolution in Ducati that was marked by the very first trellis frame, paired with a new engine by the manufacturer in the Pantah 500 twin cylinder. This was an update in technology that was revolutionary in its time. It wasn’t met with the enthusiasm that was expected, initially, but it was fast and it was powerful. This was later realized and sports media began to pick up on it and extol the virtues of this unique model. As it turned out, the Pantah 500 would become one of the most successful Ducati models ever produced. It was powered by a V twin 4-stroke 498cc engine that cranked 50 horses and achieved a top seed of 200 km/h, matched with a 5-speed transmission. The 906 Paso succeeded the 750 Paso, which was a great commercial success for Ducati. This model featured a different look with a red and white color scheme which was a visual indicator of the evolution of the Paso family that was powered by a 904cc engine that delivered 88 horsepower. it was capable of reaching a top speed of 220 km per hour at its max and was matched with a 6-speed transmission. It kept the same fueling, electrical system and chassis as the 750, but was equipped with a different engine. This bike was produced into the early 1990s and marked the end of the 1980s decade as it entered into a new era with production ending after just two years.