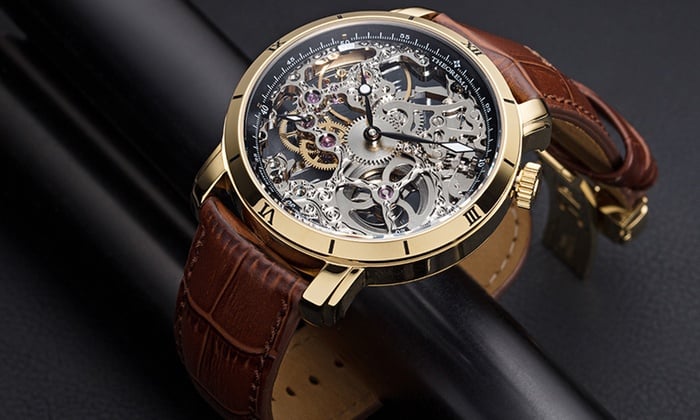 Skeleton watches are popular with a wide range of people. After all, the sight of their exposed internals makes for a very striking visual, particularly when the watchmakers have gone to the effort of embellishing them as much as possible. With that said, it is important to note that there is considerable variation in skeleton watches, which is why while there are skeleton watches that cost more than $1,000, there are plenty of other examples that can be found for below that particular price.

Here are five examples of skeleton watches that are well-worth owning while being below $1,000 in price: Bulova Men’s Automatic Watch is made using stainless steel for both the case and the band, thus resulting in what one might call a simple and straightforward but not ineffective look that is suitable for use in a wide range of settings. With that said, what really enables the watch to stand out is the blue that has been used here and there on the dial, which makes for an excellent look when compared with their more subdued surroundings. Truly, this is a good example of how contrasts can enable each component to be enhanced by the presence of the other. This skeleton watch from Burgmeister comes with a stainless steel case, which is a strong material that can stand the test of time. Moreover, it is a material that contrasts well with its exposed movement, which comes in a separate color to enable it to stand out that much more. With that said, while this skeleton watch is excellent, it is important to note that it is more casual in nature. For proof, look no further than its leather strap, which offers increased comfort compared to what its wearer can expect from some other colder material. Some skeleton watches have been lavished with ornamentation. For proof, look no further than this Ingersoll watch. For starters, its dial comes with a patterned edge, which is small but surprisingly significant. Furthermore, its movement is an intriguing mix of both gold and silver tones, which serve as a pleasing background to the bold black color of its Roman numerals. With that said, the watch comes with a leather strap rather than something more metallic, which actually enhances rather than detracts from its appeal by adding that much more visual interest to an already intriguing time-piece. For those who want something more luxurious without breaking their budget in the process, there is this Jiusko watch. Its casing as well as its band are made out of silver-toned stainless steel, which provides it with much of its long-lasting nature. Meanwhile, its movement is shown in gorgeous, golden-toned detail, which is made that much better by the support of its setting. Of course, the movement is shielded by Sapphire Glass, which has been scratch-proofed so that the wearer won’t have to worry about the slow accumulation of scratches and other signs of damage over time. Something that should enable this watch to last that much longer so as to continue pleasing its owner for years and years to come so long as it is treated right. Here, Stuhrling has used gold-toned stainless steel to create a skeleton watch that is sure to leave a lasting impression on those who see it. On top of this, the stainless steel of the case as well as the Krysterna crystal that has been used for the window of the dial combine to provide the time-piece with outstanding durability, with an excellent example being how it actually possesses water resistance for up to a depth of 50 meters. Movement-wise, this Stuhrling watch has an AM/PM indicator, which its wearer should be able to count upon for year after year. This is particularly true because it is powered by the movement of the wearer’s wrist rather than some other source, meaning that it should be able to keep on going and going.