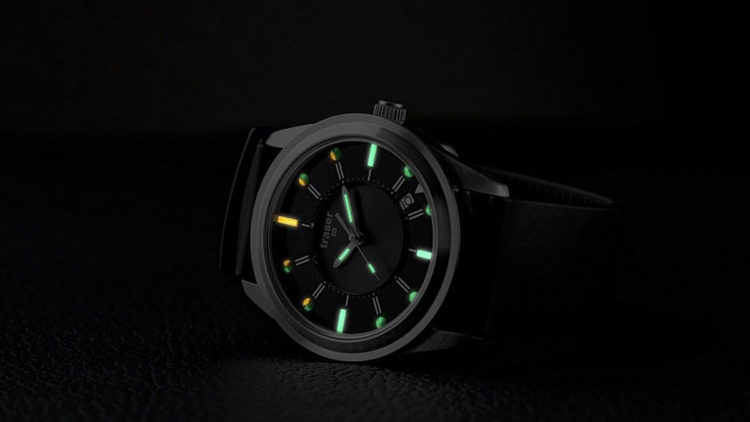 Back in the day, watches were actually pretty basic. For the most part, they were designed to do one thing, and that was to tell time. Sure, they needed to be accurate and reliable. One of the best things was having a watch that you didn’t have to wind up all the time, yet it could keep time without missing a beat. They weren’t really considered a fashion symbol. Instead, they were designed to be functional. At the time, little else was considered when a watch was designed. Today, things have changed a great deal. Watches that are manufactured today can do several different things at once, and they sometimes look more like pieces of art than watches. If you’re interested in watches made by Traser, here are five of the best ones listed below.

The thing that makes this watch stand out is definitely rooted in its appearance. It’s a large watch that immediately captures your attention. The entire watch is black, including the wristband, the case, and even the face itself. It features three hands so you can keep track of seconds and it has white numbers and tick marks, making it easy to see. The watch also features the date, so you never have to wonder what day it is, This is a smart looking watch that is fairly large in size. Perhaps the most important thing about it is the fact that it’s designed to military specifications, something that few other watches can claim. It’s designed to have a rather stealthy appearance, despite its large size. That being said, it’s still a watch that is more than capable of making a statement. It also have tritium lighting, so you will never have to be concerned about not being able to see the numbers clearly, despite the fact that the entire watch is dark in color. It’s truly one of the most interesting watches to come along in quite some time, and it’s one that anyone would be proud to own.

On top of having one of the longest names for a watch out of any of the selections by the company, there are several things that make this one stand out. First and foremost, it’s just a little bit smaller than most of the watches made by Traser. That makes it a good option for anyone that likes the company, yet doesn’t necessarily want to wear one of the larger watches. It also features the blacked-out appearance, with the exception of the hands and tick marks, which are white. This watch looks virtually identical to the one that was discussed in the first paragraph. If you’ll notice, it even has the same name. If that’s the case, then what’s different about it? The solution is a simple one, yet it makes a great deal of difference. One of the watches winds up manually and the other one is automatic, just as the name implies. If you love the looks of the watch but you’re not so crazy about the idea of winding one up every day, then this is the one you need. Without a doubt, this is one of the biggest watches the company makes. It is designed to make a bold statement and it do so very successfully. As is the case with other Traser watches, it incorporates the blacked out stealth approach. However, the tick marks on the face are white, so it’s easy to see. It also features the day of the week and it can even be used as a stopwatch whenever you want. The watch features both standard and military time, so you have a number of options available to you.

There is no question that watches made by Traser have a distinct appearance, but the company is also well known for its performance. If you want a watch that can take a ton of punishment and keep going as if nothing happened, any of these watches would serves you well. The same holds true if you want a watch that looks good. The thing about these watches is that you can wear them to your next board meeting, when you’re working in the field in a job that requires a lot of physical activity, and when you’re just kicking back at home. Traser watches work well in any situation.