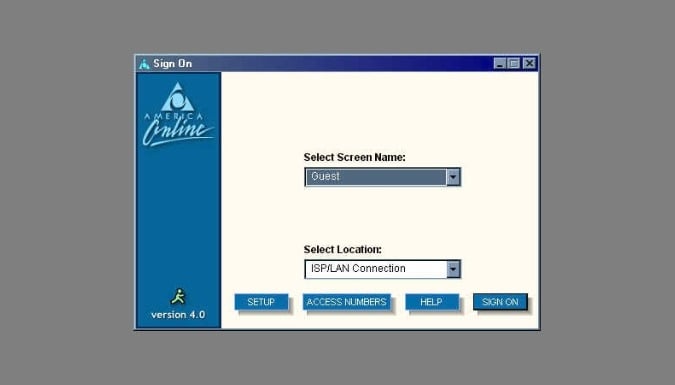 AOL isn’t much of a player in the modern market. However, it should be a very recognizable name for people who remember the 90s. After all, there was a time when AOL users made up a considerable percentage of the people on the Internet, which was a very impressive achievement to say the least.

For those who are unfamiliar, AOL started out as Control Video Corporation (CVC), which had a single product called GameLine. In short, GameLine was an online service for the video game console called the Atari 2600, which let interested individuals download games over their phone lines. On the whole, CVC wasn’t particularly successful, which is why a collection of people went on to found Quantum Computer Services in 1985 using what remained of CVC.

Quantum Computer Services would proceed to launch an online service for Commodore 64 and 128 computers called Quantum Link. It wasn’t the first program of its kind, but it nonetheless managed to stand out in that it made use of the computing resources of the platform on which it was installed instead of using it as nothing more than a terminal. Regardless, Quantum Link proved to be promising, so much so that Quantum Computer Services went on to launch similar services for both Apple and PC computers. Eventually, Quantum Computer Services would rebrand Quantum Link as America Online (AOL) in 1989, having chosen to market its service as Internet for people who weren’t familiar with it, which was contrasted with its competitor CompuServe, which catered to consumers with a lot more technical know-how.

Throughout much of the 1990s, AOL saw huge success. In part, this was helped by AOL’s efforts in promoting trial subscriptions, which resulted in a huge number of CDs being sent out to potential customers. However, it should also be noted that AOL teamed up with a wide range of entities to provide a wide range of online services, thus making a subscription that much more appealing for those same individuals. In time, AOL actually saw so much growth that it became incapable of meeting the needs of all of its customers, which had a notable impact on its subscription numbers when one-time customers stopped using its service because of the constant busy signals.

By 2000, AOL had merged with Time Warner to create the corporate colossus called AOL Time Warner, which made a fair amount of sense because AOL was the single biggest Internet provider out there in those times. Unfortunately, while AOL’s expectations for the future were high, they would prove to be much more optimistic than what reality warranted. In short, AOL got gutted by the bursting of the Internet bubble in the early 2000s, which wasn’t helped by the fact that AOL executives were very slow to readjust their predictions. Something that resulted in further hammering by the stock markets.

How Has AOL Mail Changed Over Time?

From the beginning, AOL offered a wide range of services to its users. Naturally, AOL Mail was one of these services, thus enabling interested individuals to both send and receive email messages. Over time, AOL Mail picked up new capabilities, which were necessary to keep it competitive in a market that has seen continuous change over time. After all, imagine the idea of the earlier versions of AOL Mail competing with something like Gmail.

Currently, AOL Mail is still in existence, which isn’t something that can be said for a lot of the other less fundamental online services once offered by AOL. However, it hasn’t exactly remained unchanged by AOL’s fortunes. For example, there was a time when AOL Mail was exclusive to AOL users, but that hasn’t been the case for a very long time because AOL needed the users more than it needed the exclusivity. Likewise, it is interesting to note that when Verizon Communications bought out AOL, it decided to drop its own in-house email service before moving its users over to the AOL Mail system. Something that made sense because of business considerations. Simply put, Verizon Communications had no real need for two email services, which would have needed two teams of personnel as well as other resources to keep running. As a result, it made sense for it to combine those two email services into one, meaning that the choice that really mattered was the one about which one it would end up keeping. Since AOL Mail still had a more important user base, it became the logical choice for Verizon Communications to focus upon.

With that said, it is interesting to note that AOL Mail is still changing. For example, since AOL and Yahoo have now been lumped together under Oath, Inc., it should come as no surprise to learn that said subsidiary is now seeking to eliminate expensive and unnecessary redundancies to improve its performance. This can be seen in how it has stated that it is planning to merge AOL and Yahoo’s email infrastructure. However, what is interesting is that there has been no announcement that it will be merging AOL and Yahoo’s respective email services, which is perhaps unsurprising considering that both services have sizable user bases that have been built up over the course of years and years. Due to this, while Verizon Communications’s in-house email service could be eliminated, it seems that the same can’t be done to either AOL or Yahoo’s email service with the same ease.

Regardless, the changes to AOL and thus AOL Mail have not been completed at this point in time. As a result, it will be very interesting to see what happens to the whole thing from this point forward. It seems improbable that AOL will ever make a comeback, but it doesn’t seem like it will be going away anytime soon barring some kind of unforeseen occurrence.