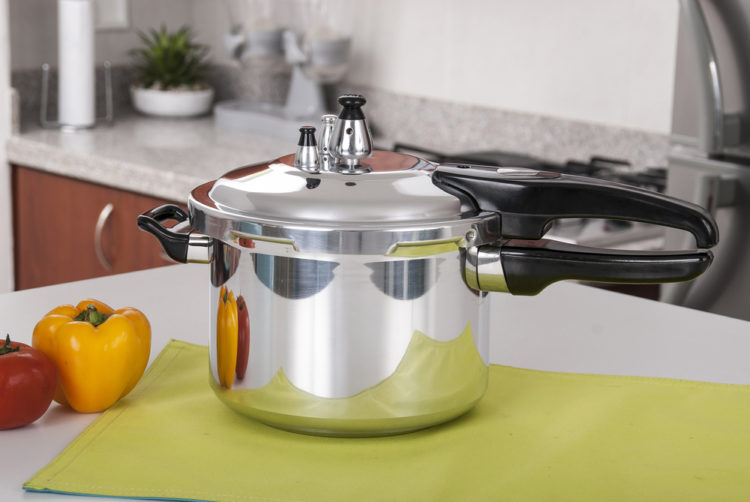 With good reason, lately pressure cookers have seen a return to popularity. They reduce cooking time as well as the generated heat throughout the kitchen, even more so if the unit is electric instead of being a stovetop model. If you’re trying to choose between a stovetop pressure cooker and an electric one, there’s definitely a few things you’ll want to consider. Although fairly basic, stovetop cookers get the job done, but just don’t have the features of electric cookers. In addition, they require closer monitoring. However, they can be converted to regular sauce pans when the lid is off or unlocked. If you really want to pressure cook the easier way, electric is the way to go. The Instant Pot has pretty much everything you’ll ever need in a kitchen appliance plus some. As in the name, this model has seven functions. In addition to being a pressure cooker, this appliance can also be used as a slow cooker, for cooking rice, for browning and/or sauteing, making yogurt, for steaming, and warming. An easy-to-use control panel lets you choose between high or low pressure, slow cooking, warming, or three sauteing temperatures simply by pushing a button. It certainly brings the need of another kitchen appliance to nil. In addition to its many functions, this pressure cooker also offers plenty of timer functions, making it easy to fit cooking into your schedule. Not only can you delay starting the appliance for up to twenty-four hours, this cooker will also automatically hold food for up to a hundred hours, making it perfect for using at any party or potluck dinner. This particular model is available in a variety of sizes as well. You can choose between five, six, or eight quart capacity. Not only does this pressure cooker have a slow cook option, it can also adjust pressure, temperature, and time automatically between both fast and slow cooking. This model offers precise temperature control, with sensors located at both the bottom and the top of the appliance in order to maintain monitoring of both pressure and temperature. Additionally, it has a steam release that is hands-free, making it even safe to use. This high-end electric cooker has eleven pressure cooking functions, which include both low and high slow cooking for up to twelve hours in addition to being able to steam, saute, sear, reduce, or keep food warm. With its custom settings, you can follow recipes exactly. When the cooking process is finished, this cooker automatically switches to keep the food warm. This cooker also has an LCD light which changes in accordance to the current process of cooking, rather it be releasing steam, cooking, or pressurizing. Some feel this model may have more options than they’ll ever use, as most only need high or low pressure, but it’s always good to have a versatile cooker. If you’re looking for an electric pressure cooker, but are only cooking for a few people or don’t have a lot of space, this one may be what you’re looking for. With a six quart capacity, it doesn’t take up as much room as the larger models, but still has the same features. This cooker offers nine different options of cooking, which includes pressure cooking, slow cooking, making rice, sauteing, and steaming, as well as others. This sturdy pot is perfect for making a variety of foods, from chili to cakes and is perfect for smaller kitchens. In addition to coming with a recipe book, this appliance also comes with a helpful free app also. If you find yourself cooking for a larger family or group, this model may be what you’re looking for, with the capacity to cook large meals daily. Conveniently, it has twelve preset cooking features which set the time and pressure for best results for a variety of foods, such as eggs, slow cook, yogurt, poultry, saute, chili/beans, stew/meat, soup, steam, multigrain, and rice. The LED display shows pressure, temperature, and cooking time. Furthermore, the delay timer allows you to start cooking time later for freshly cooked meals anytime. Both the pressure and cooking time are adjustable, allowing the best results possible. This large cooker takes up more space than an average unit as well as being heavier. However, it’s just as easy to clean as its smaller counterparts and includes a measuring cup, rice scoop, steam basket, and steam rack.