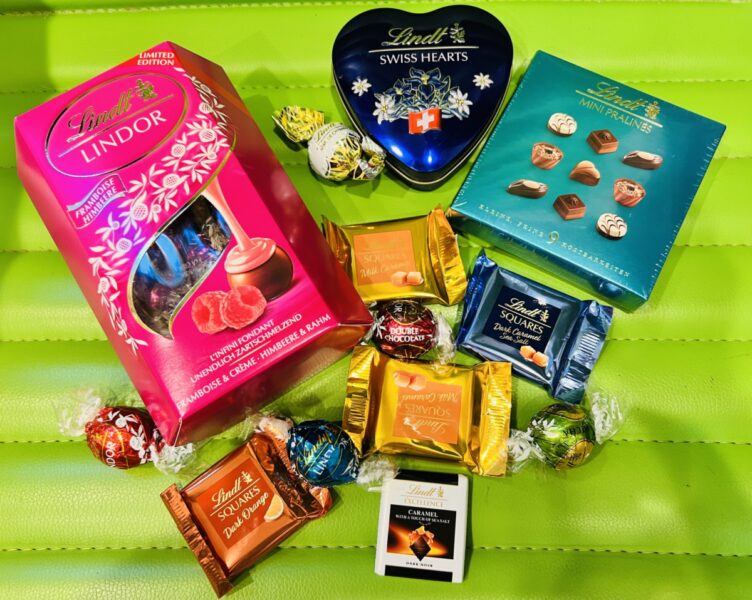 Everyone who knows me, even marginally, knows I love sweets. So earlier this month I was in chocoholic bliss when as assignment brought me to Zurich’s  Lindt Home of Chocolate. Indeed I stayed so long learning about the 5,000-year history of the humble, yet all-important bean while inhaling the blissful aroma, that as closing time approached, staff was likely concerned they had a squatter. 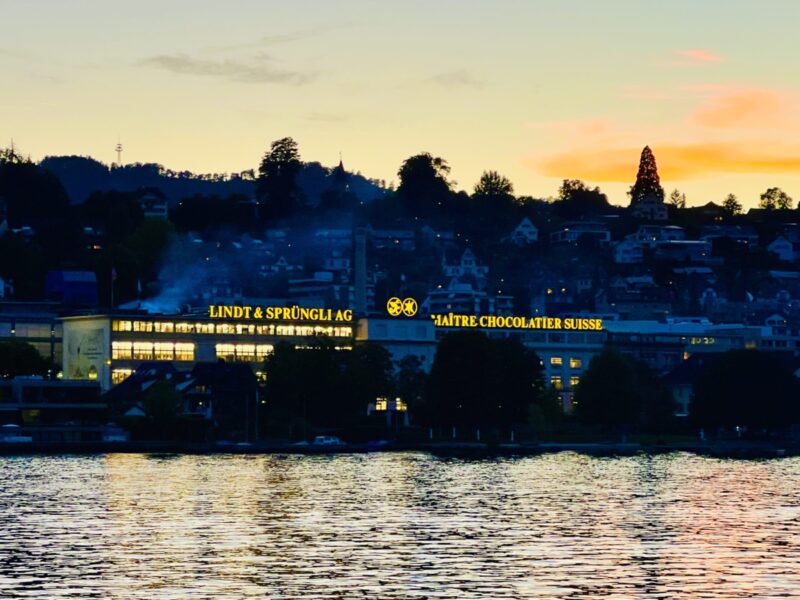 Armed with three pounds of chocolate, including several debut confections, I bid auf weidersehen to my heroes, Lindt, Sprungli, and Teuscher. Hopping on a Lake Zurich commuter boat to Burkliplatz, I then strolled Bahnhofstrasse, Zurich’s glitzy shopping street. But who needs Cartier and Piaget when one has chocolates and pralines? Ending at the Hauptbanhof, Zurich’s main train station, I boarded the train to Zurich’s international airport with my chocolate stash bound for Iceland.

On arrival I traveled 90-minutes south to Hotel Rangá, an incredibly comfortable 51-room hotel, and member of the small luxury hotels of the world. Set along the meandering banks of the 16-mile Rangá River with the snowcapped Eyjafjallajökull glacier-volcano resting majestically in the distance.

Table of Contents show
1 Rhubarb Jams, Jellies, and Pies, Oh My
2 The Travails of the Traveling Tuber and its Owner
3 P is for Portland and Apparently for Pies 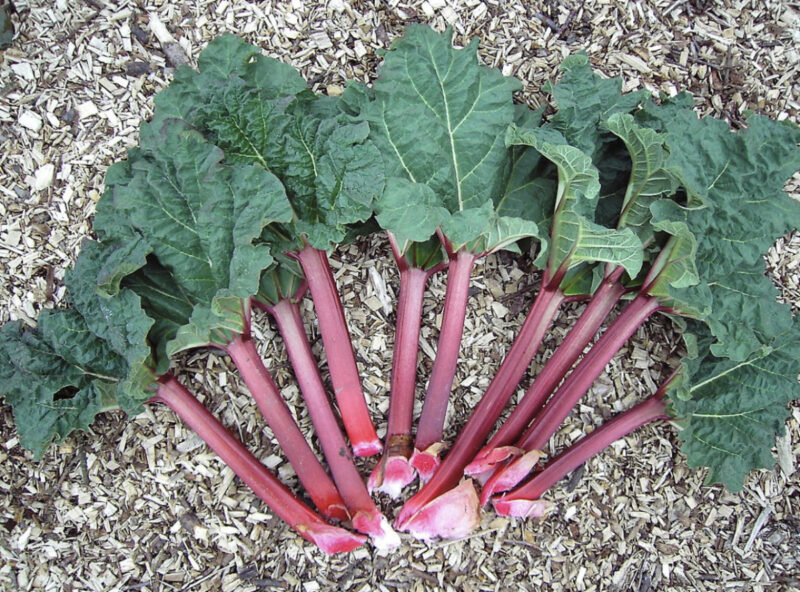 Here the Rhubarb Pie saga begins. Growing up in Hawaii and California, rhubarb wasn’t really in our lexicon. A vague recollection persists of once eating a strawberry rhubarb pie about 20 years ago at Thanksgiving dinner at the Hollywood home of a comedian and his wife, my former law partner. Immediately I fell deeply in love, despite that the rhubarb was mixed in with the less-loved strawberry. Thereafter commenced the annual search for a rhubarb pie that never materialized. 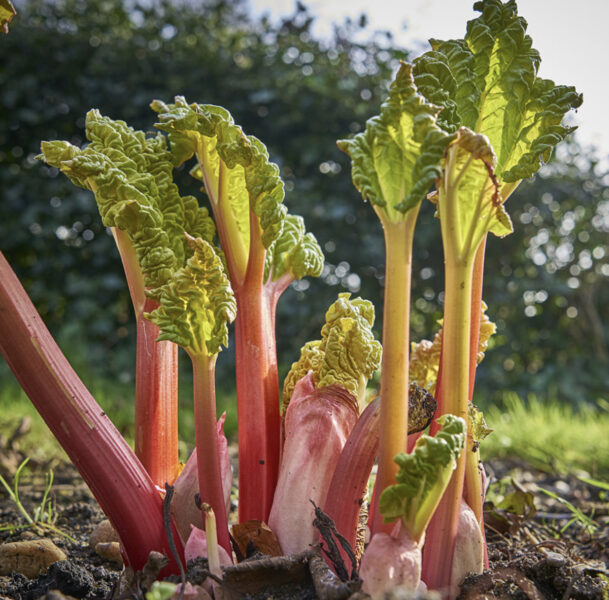 In Iceland, rhubarb is everywhere. Rhubarb jam or jelly at breakfast, rhubarb cakes or torts at cafés, and rhubarb pies at bakeries. For over 130 years, Icelanders have been having a roaring rhubarb rage. My Southcoast Adventures guide Stefan Arngrimsson learned of my serious rhubarb obsession while taking me to Katla Ice Caves. Wearing helmets and crampons, we trekked through the sparkling caves while discussing just how much sugar goes into a rhubarb pie. Never mind the kilos of sugar involved, I would’ve happily listened to Stefan describe his laundry list; his voice an intoxicating mix of an Icelandic Morgan Freeman and contrabass. 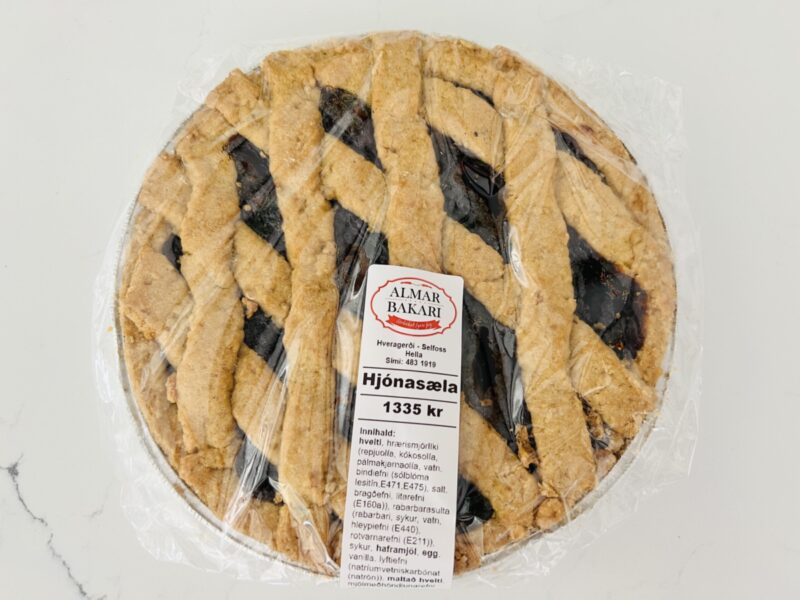 The next day, Stefan delivered the holy grail, a still warm rhubarb pie from a local bakery. Leaving in two days and having my daily fill of rhubarb and other Viking delicacies at Rangá, I decided to take the pie home to my husband, likewise a long-suffering rhubarb fan. Just before departure, I decided more armor was needed to secure the pie’s safe international passage. At Iceland Air’s Reykjavik business class lounge, I asked an employee for some tin foil showing her my rhubarb prize while mumbling something about pies, planes, and possible gooey outcomes since the pie was stashed between the Swiss chocolates and an acquired Icelandic lambskin. More on that another day. With typical Icelandic generosity, she returned bearing several feet of aluminum and a warm smile that could’ve melted a glacier mid-winter.

The Travails of the Traveling Tuber and its Owner 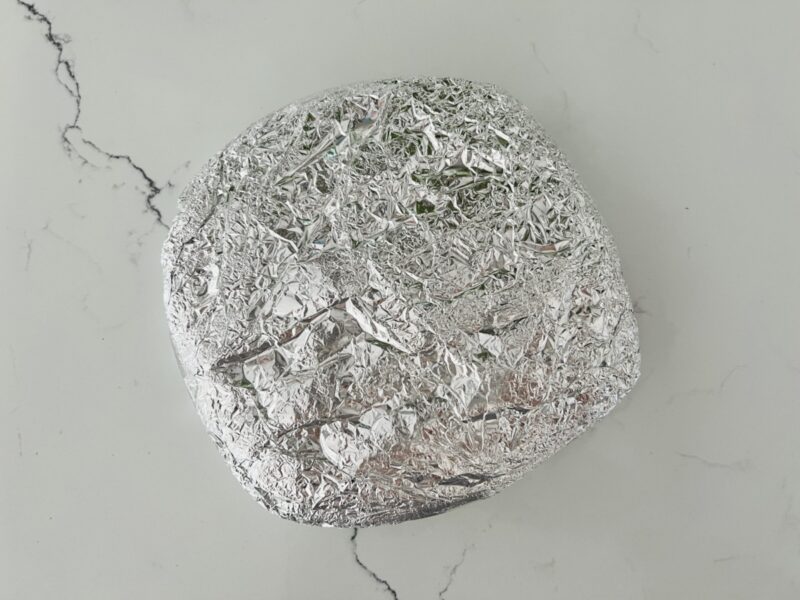 The flight leaving Reykjavik departed on time and my pie placed comfortably in its overhead home for the eight-hour jaunt across the pond and continent to Seattle. Here is where the pie and I nearly went to pieces. We boarded an LAX-bound Alaska Airlines flight originally delayed 90-minutes owing to a missing pilot. When the pilot arrived we were told, “The first officer timed out.” While we waited for a new one, the pilot said, “There was a small mechanical problem with the aircraft and maintenance had been contacted.” So my pie and I waited onboard rather patiently. About an hour later, never knowing if a new first officer had boarded or the mechanical issue resolved, the pilot informed us that, “The flight was being cancelled.”

It was about 11pm when my pie and I and deplaned. Taking an airport train to reach the only open customer service desk, the train doors immediately shut nearly taking my prized pie without me. The next train came and my pie and I descended on the lone available agent. Behind me about 200 passengers formed a line. By the time I reached the desk, three other agents had been called. Informed there would be no flights until morning, my pie and I were booked on a 9:30am flight the next morning. However, I was also told there were no hotel rooms left. It was now 11:40pm. Less patiently, I insisted this was the wrong answer. A hundred or so painfully slow keystrokes later, the agent found a nearby Hilton. Another hundred keystrokes later, the agent said,  “That room was no longer available.” It was then I wondered why Mavis Beacon’s disciples hadn’t been hired. Another 15-minutes, and another room was found at the Hampton Inn three-miles away. Unfortunately shuttles stopped at 10pm.

My pie and I went to the taxi line. Twenty minutes later I put my carryon wheelie bag in the cab’s trunk – thank goodness I travel without check-in luggage – and my pie and I alit the taxi. I gave the driver the address. He refused to turn on the meter, saying the fare would be $25 for my pie and I for the three-mile jaunt. And it would have to be cash. Realizing I had 30 now useless Swiss Francs and only $18, out of the cab my pie and I went. Not wanting to search for an airport ATM, I waited for a willing metered cabbie. Arriving finally to the hotel, the cabbie said, “My credit card machine doesn’t work.” The meter read $15. Giving him all my US cash, my pie and I exited. 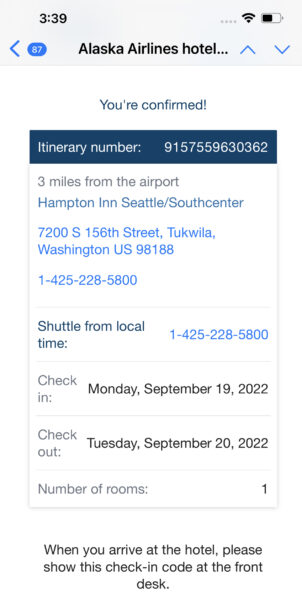 Armed with an Alaska Airlines email reflecting the hotel’s name and confirmation number, my pie and I attempted check-in after midnight. The manager-on-duty said the credit card Alaska Airlines had used to guarantee my room was declined. If I wanted a room, I would need to pay $301. I waited while she told the 10 passengers who had followed the same thing. Everyone had an Alaska Airlines email confirming paid reservations, and all were denied a room without immediate additional full payment.  Paying for my pie and I, we went upstairs. It had been 10-hours since my last meal and I thought my pie wouldn’t make it to LA. Putting the pie in the fridge, I set my alarm for four hours later.

P is for Portland and Apparently for Pies

Waking at 5:30am, I opened my phone to find an email from Alaska Airlines that comes with the terror-inducing yellow hazard sign. “Sorry, your flight has been cancelled,” it said and came with an updated itinerary for a 9:30PM flight to Portland. While Portland might be nice any other day, it wasn’t today for my pie and I. While my pie behaved, my patience was ending. 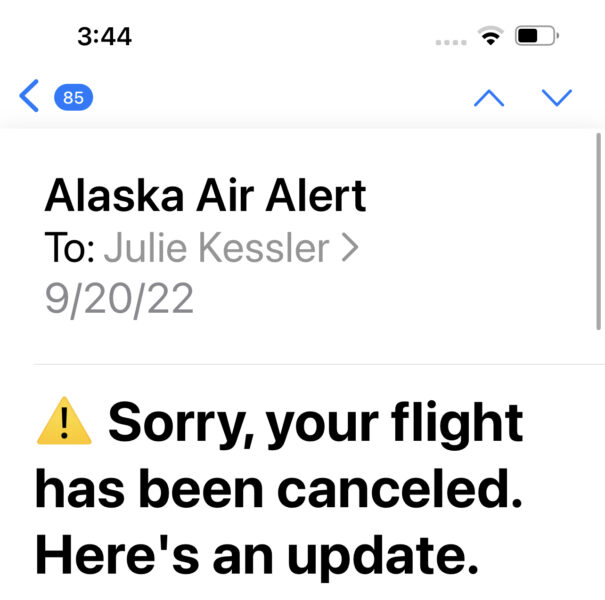 Unable to change the ticket online as it been booked by an agent, I called customer service and while on hold managed to take an entire shower with the door open. Drying off, the kind agent reached out to her lead – another long hold – and finally got me on another LAX flight that departed at 10:15am. Naturally it was overbooked and I was in a dreaded middle seat while my pie, chocolates, and lambskin were resting comfortably under the seat.

My pie and I finally arrived to LAX exactly 28-hours after departing Reykjavik. Incredibly, while half-way down the long escalator ride from the arrival gate to ground level, the escalator gravely malfunctioned, severely jerking riders down several steps.  Grabbing the hand rail to save myself from disaster, my wheelie bag tumbled down the escalator, while my pie and I were nearly flattened by projectile suitcases falling from above. When the escalator malfunctioned a second time, riders simply sat on the metal steps until ground level was reached. Even my Hollywood comedian friend couldn’t have made this up. Happily, my pie and I got home from this imperfect journey ending an utterly perfect trip to the land of fire and ice. Now if you’ll excuse me, it’s time for some pie. 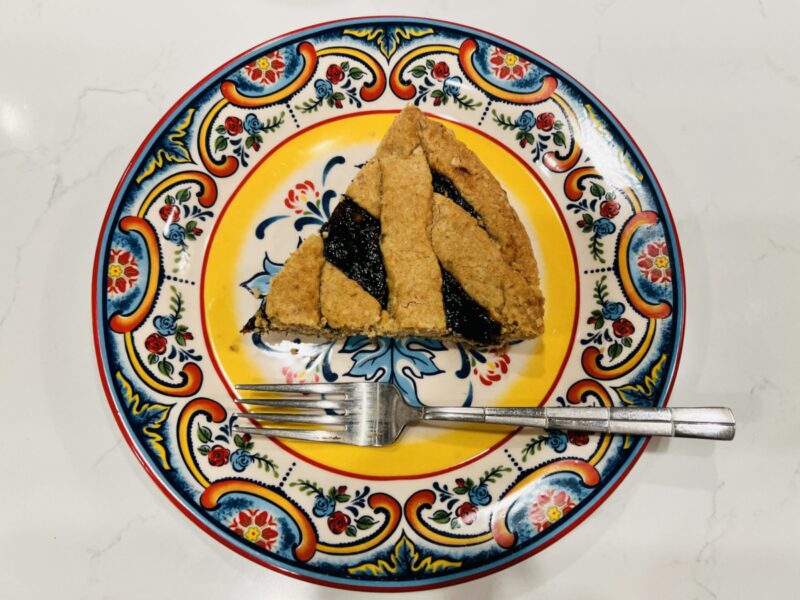 Epilogue: After 75-minutes on hold to speak with an Alaska Airlines agent a few days my return, the airline ultimately returned the hotel cost to my credit card. It also provided a $200 future flight credit. Perhaps Alaska Airlines flies somewhere there’s rhubarb pie? 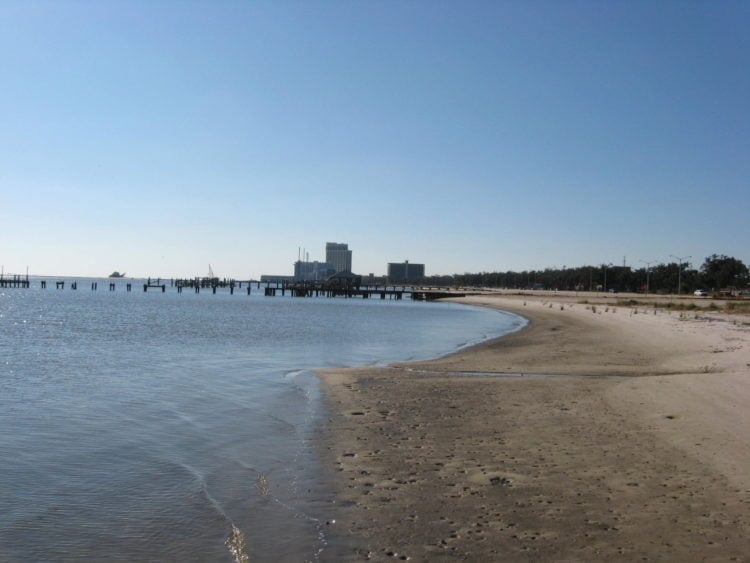 Due to its coastal location on the Gulf of Mexico, Biloxi in Mississippi is famous for both its maritime history and its seafood. Residents and visitors alike can enjoy the delights of the outstanding local…

There are many reasons why people choose to visit New York City, such as taking a business trip, visiting family, or taking a vacation to see the sights or shop in the city. Regardless of… 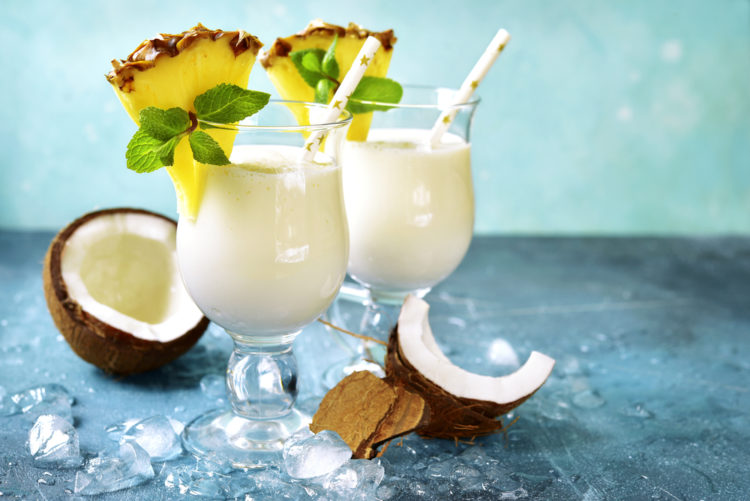 Pina Coladas are Caribbean-inspired cocktails that are only as good as the ingredients used to make them. These fruity coconut-flavored delights can be made into signature creations by using the most flavorful premium pineapple juice,… 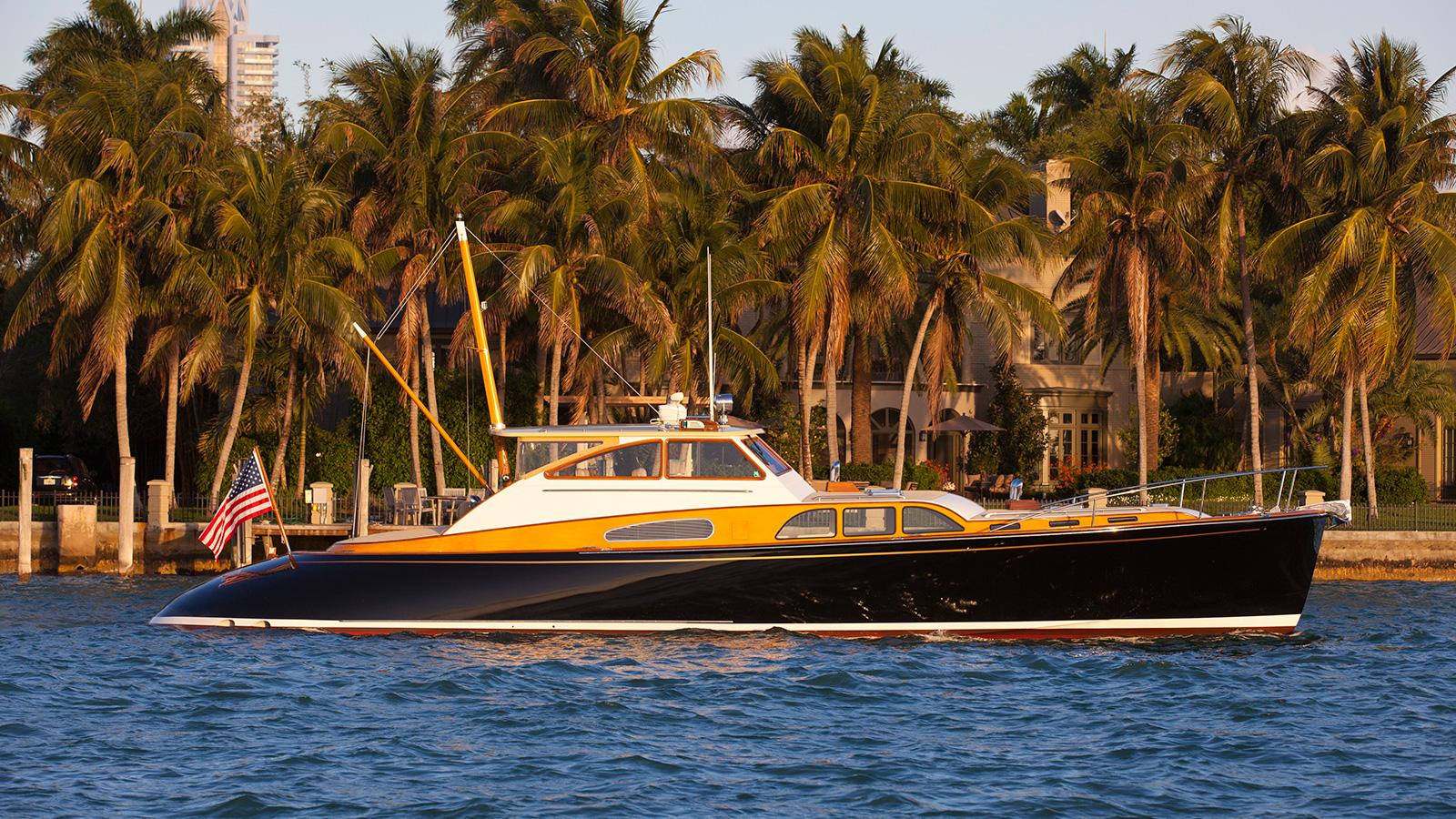 Who knew that legendary musician Billy Joel designed a yacht? “The Piano Man” has written, performed and recorded a large playlist of Top 40 Pop songs since he began his career in the 1970’s. Joel… 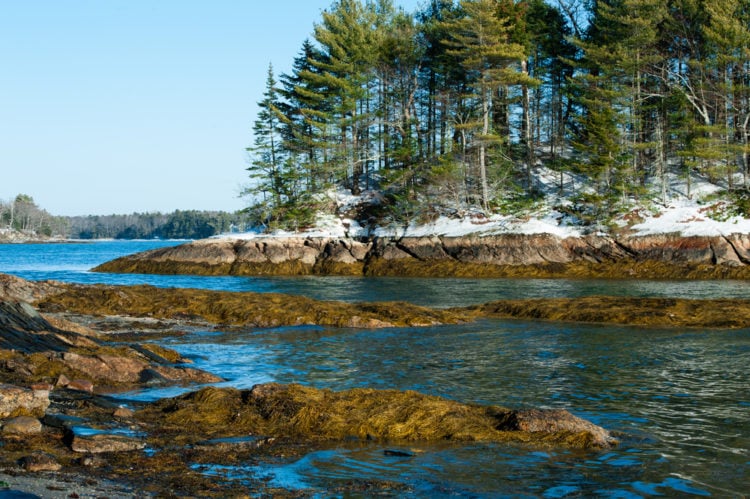 Freeport is a coastal town in main that includes the Harraseeket Historic District, which encompasses some of Maine’s oldest maritime villages. It is popular due to its coastal location, and it is also known for… 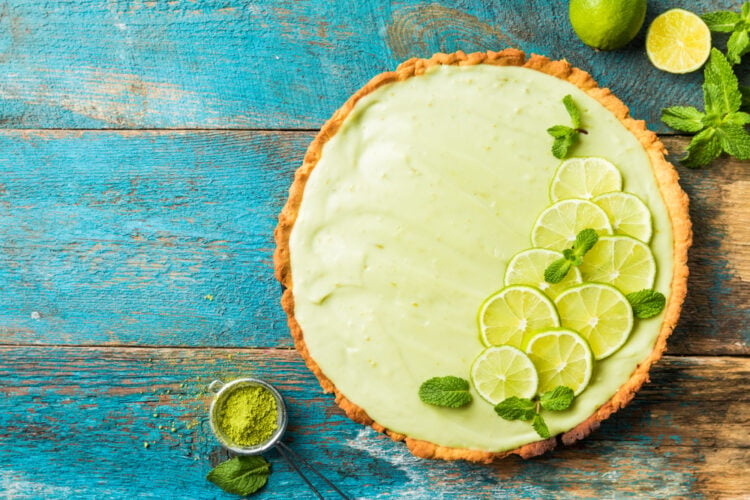 Florida is a great place to find and taste some of the best seafood in the United States. Rock shrimp, grouper, and Key West pink shrimp are all native to Florida waters and are commonly…