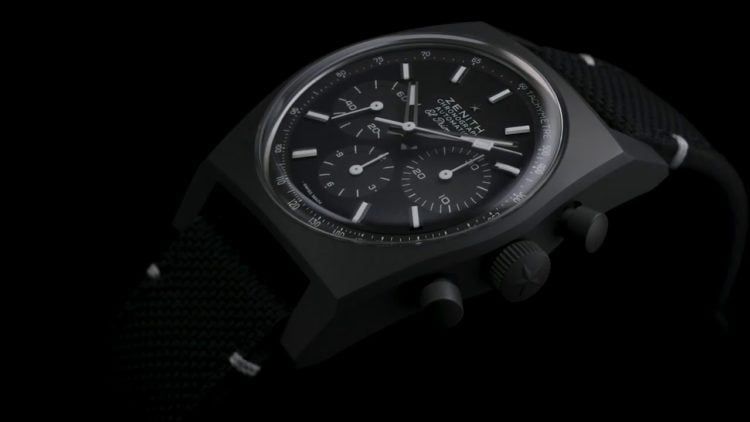 In 1865, a 22-year-old watchmaker by the name of Georges Favre-Jacot launched Zenith in Le Locle in the canton of Neuchâtel in Switzerland. Over the next two centuries, the company grew to become one of the leading manufactures of luxury swiss watches in the world. So converted had Zenith timepieces become by the early 20th century, even Mahatma Gandhi owned one. In 1969, the brand launched the El Primero caliber, one of the very first automatic chronograph movements ever made. In one fell swoop, the El Primero made the manual-winding chronographs of the day technologically obsolete… although that didn’t stop Zenith using one on a gorgeous blacked-out model the following year. While that particular beauty never made it to market, its story doesn’t end there. Over 50 years since it was left to languish in El Primero developer Charles Vermo’s workshop, it’s enjoying a second life in the Zenith Chronomaster Revival ‘Shadow’, a watch that takes direct inspiration from the forgotten legend. Due for release later this year, the Shadow is already generating all kinds of buzz in watch circles. Find out why with these ten little facts.

The story of the Zenith Chronomaster Revival ‘Shadow’ can trace its roots all the way back to 1970. In 1969, Zenith launched the trailblazing El Primero column-wheel Chrono caliber: a year later, it planned on capitalizing on the buzz around the brand with an all-new black PVD chronograph. A few prototypes of the watch (which featured a very rare blackened steel case) were made, but the final piece never made it into production. Then, in 2019, a team at Zenith began sorting through the plans and parts connected with the El Primero movement that had remained hidden in the walled-off attic used as the workshop of El Primero developer Charles Vermot for so many years. Lying among the artifacts was the original prototype of the black chronograph. Consigned for over 50 years to the realms of history, the prototype finally saw the light of day again when Zenith decided to use it as the inspiration for the Chronomaster Revival ‘Shadow’.

The mysterious 1970’s prototype may serve as the inspiration for the Chronomaster Revival ‘Shadow’, but as Zenith CEO, Julien Tornare, told professionalwatches.com at the launch of the Defy 21 Land Rover Edition in Manhattan earlier this year, the Shadow is a reimagining rather than a reproduction. Rather than replicating the 1970s black chronograph prototype to the letter, the Shadow takes its essence and reimagines it for a 21st Century audience. Like the prototype, the Shadow is housed in a 37mm case, but whereas the prototype was fitted with a manual-winding chronograph movement, the Shadow features the famous El Primero movement.

The Shadow may draw its inspiration from the 70s, but its tech is nothing if not 21st century. As masterhorologer.com notes, the piece offers superior legibility, with the grey counters and tachymeter scale offering enough contrast against the matte black dial to make for easy reading. The hands and markers, meanwhile, utilize glow-in-the-dark SuperLuminova technology (a fluorescent material that offers ten times better brightness than zinc sulfide-based materials) for excellent legibility in even low visibility.

The Shadow is nothing if not handsome, with an understated but eye-catching aesthetic that’s complemented perfectly by its matte black dial and subtle soft gray chronograph subdials and tachymeter scale. Against the subdued color scheme of the face, the shiny, SuperLuminova coated, rhodium-plated indexes and indices hour and minute hands stand out beautifully, while the white subdial hands and seconds hand offer the perfect contrast.

A watch can be as pretty as it likes, but if it ain’t easy to wear, no one’s going to be strapping it to their wrist. Fortunately, the Shadow is as comfortable as it is handsome, with a black rubber strap that offers the utmost in easy wearing and a 37mm diameter that makes a welcome change to the bulky, cumbersome watches that have been dominating the market for the last decade or so.

If you were wondering where this stealthy little beauty gets its name from, a quick glance should be enough to reveal all. Unlike most watches that utilize steel, the Shadow gets its dark good looks from micro-blasted titanium. Completing the shadowy color scheme is the black and grey toned dial, which offers just enough contrast with its white-coated indexes to stand out from the crowd.

As a Chronomaster, customers are going to expect a world-class movement from the Shadow. Fortunately, that’s exactly what they get. For their latest piece, Zenith has plumped for a no-date version of the groundbreaking El Primero 4061 movement, which is visible in all its glory through the display back. For those interested in the spec of the movement, here we have it: Caliber: El Primero 4061 Automatic. Functions: Hours, minutes, small seconds, 12-hour chronograph with 30-minute counter. Winding: Automatic. Frequency: 36,000 (5 Hz). Jewels: 31.

Given the high-quality movement, you’re probably expecting a pretty significant power reserve from the Shadow. And on that score, Zenith doesn’t disappoint. While most watches come with a reserve of around 40 hours, the Shadow kicks sand in their face with a mighty 50 hours.

As yet, Zenith hasn’t announced a release date for the Shadow. They have, however, announced a price. If you want to add the Shadow to your collection when it hits online and Zenith boutiques, you can expect to fork out around 8400 CHF/ $8,200 USD. 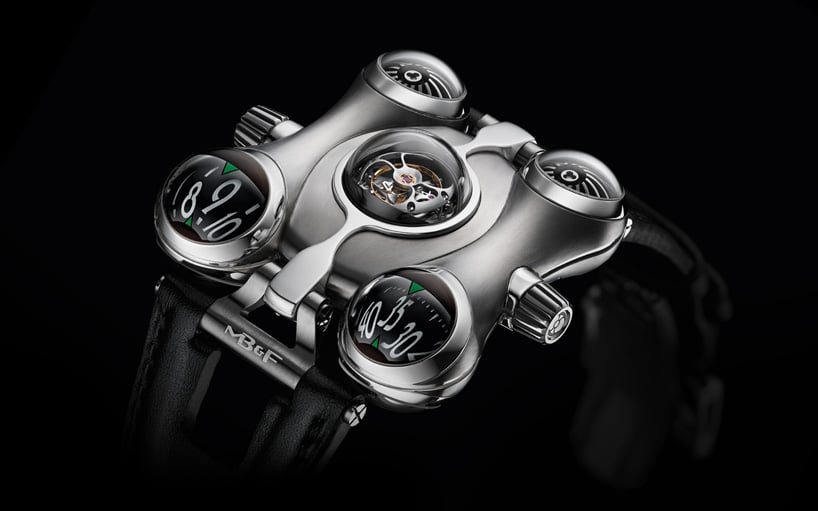 While some watch manufacturers produce practical timepieces that look attractive and…

Rolex watches have been the ultimate status symbol for generations. They… 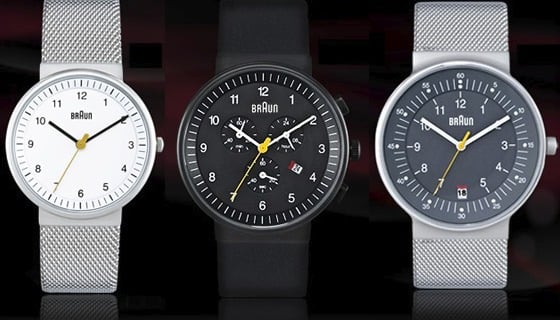 When you hear the name Braun, the first things that should… 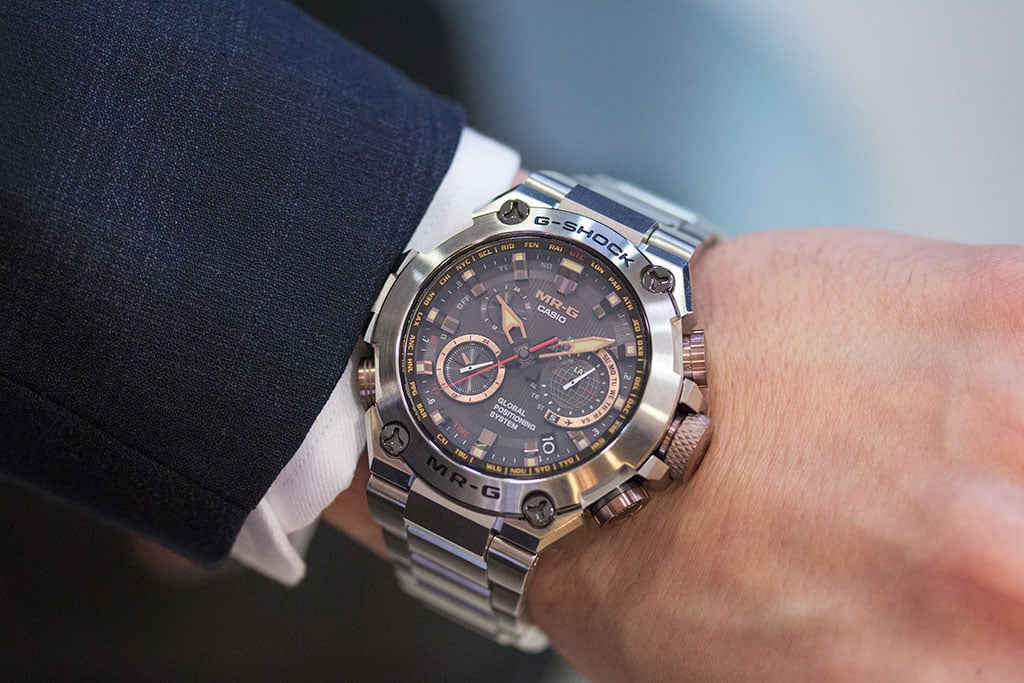 Casio has been one of the top leaders in pianos, projectors,… 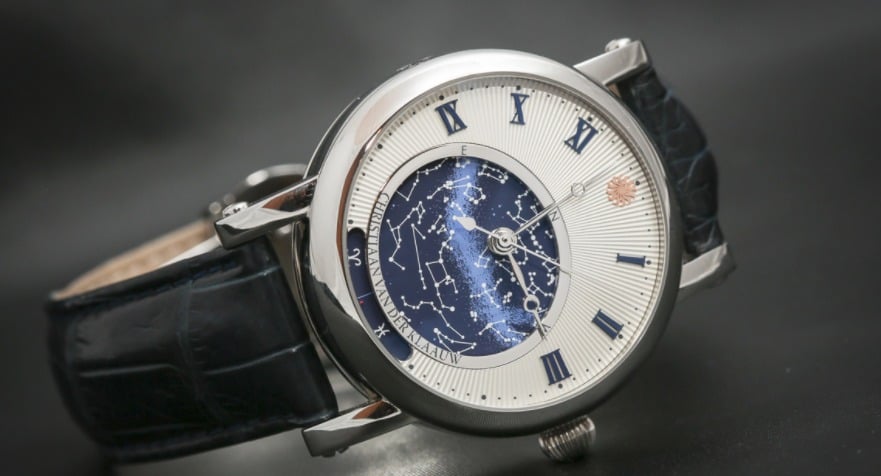 One of the top names in the luxury watch scene is…

Although TAG Heuer was founded well over 150 years ago, there’s…