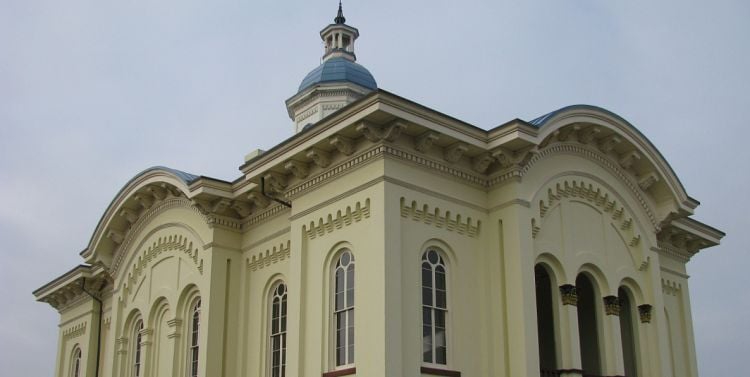 Every state has good places and bad places to live, including North Carolina and South Carolina, known collectively as the Carolinas. Many factors determine whether somewhere is considered undesirable, including poor schools, high crime rates, a lack of amenities, limited leisure options, and a poor economy. If you are considering living in the Carolinas, then you will probably want to avoid living in these areas. Here are the 20 worst places to live in the Carolinas to help you decide where you want to live and which locations you would prefer to avoid.

Batesburg-Leesville is a South Carolina town that straddles Lexington County and Saluda County. There are several statistics that indicate that there are big issues in this city, not least the 19.4 percent poverty rate. Even though the average property price of $113,000 may seem like a low price to pay, there are not many residents who can afford their own home due to their financial situation.

Williamston’s motto is ‘easy living with hometown values.’ However, this small town does not live up to its claims. The economic situation means that easy living is unlikely, as Area Vibes says that the unemployment rate is 73 percent above average while the median household income is 37 percent below the average. Another problem in Williamston is the high crime rates, which means that the town’s 5,217 residents do not feel safe.

Although the unemployment rate is not great at 9.5 percent, it is not the biggest issue facing the residents. A greater concern is the risk of becoming a victim of crime. In 2020, there were 105 violent crimes in this location. However, residents face a greater risk of property crimes, as the statistics show there is a 1 in 15.6 chance of a crime such as vehicle theft or robbery. It is possible that the lack of safety is impacting property prices, as the average price of a home is just $103,000.

Bennettsville is one of South Carolina’s poorest places, as the unemployment rate is 12.7 percent and the average income is barely over $30,000. The lack of job opportunities has also contributed to the city’s astronomically high poverty rate, which is just over 30 percent. According to Niche, other negative aspects of life in Bennettsville are below-average schools, limited leisure activities, and a lack of nightlife.

Allendale is one of the smallest towns on this list, as the population is barely more than 3,000 people. However, this does not mean that it is a location that is full of charm and with a strong community. If anything, the opposite is true, as it has a disproportionately high crime rate. It is possible to buy a house in Allendale for under $39,000, but there are two ways of looking at that situation. While it may seem like a great deal and show that the area is affordable, it is also a sign that it is not a great place to live, and there is no demand for housing. Another reason people do not want to live there is that the low median household income means that more than a third of the population is living below the poverty line.

If you are looking for new and exciting employment opportunities, then steer clear of Andrews in North Carolina. A lack of job opportunities in the area is problematic, and this has led to 14.4 percent of the population facing unemployment. Even if you are lucky enough to land a job in this city, then you may find yourself very disappointed with the earnings potential, as the median household income is a dire $22,644. Things might not seem so dismal if there were things to do in the area, but that is sadly not the case.

There are two sides to Monroe, as it has good points and negative features, which means that the opinion of residents is divided about whether it is a good place to live. On the one hand, the median household income is decent, and residents can find plenty to keep themselves entertained. On the other hand, the high violent crime rate makes it a dangerous place to live. If living in an area where you feel safe is high on your list of priorities, then avoid Monroe.

There is a whole list of reasons why Chester in South Carolina is one of the worst places to live in the Carolinas. First, it has the state’s third-highest crime rate. Second, more than 10 percent of the population are unemployed. Third, more than a quarter of the residents live in poverty. Finally, the median household income is just $26,330.

It is likely that Garland will be a big disappointment to you if you expect this small town to have a close-knit community and friendly people. The high crime rate suggests that the neighborhood is anything but friendly, and the North Carolina town is lacking in the charm you might expect. Other problems are the high unemployment rate, the low median household income, and the above-average rate of people living below the poverty line. If the economic situation and crime rates in Garland are not enough to deter you from living in this small town, then perhaps the lack of things to do in your leisure time will make you think twice.

Lexington, North Carolina, has a population of 18,861. Perhaps the population would increase if there were more appealing features in the city. However, it is a city facing huge problems that deter people from living there. One of the most significant issues is the high crime rates, as it is considered an unsafe place to live. Another big problem is schooling options, as the school system in Lexington is badly underfunded, which means that the schools perform poorly. The below-average schools are not the only reason that families do not want to live in the city, as there is also a lack of amenities and leisure activities for families.

North Charleston is in the top ten most dangerous places to live in South Carolina, which is why it is one of the worst places to live in the Carolinas. 2018 was a particularly bad year for crime, as there were 6,567 property crimes and 1,039 violent crimes. Unfortunately, the situation has not improved over the last few years. If you value your safety, then this is not the place for you.

The people of Darlington have very little to get excited about as they struggle to find ways to spend their free time. Even if they had more leisure activities in this area, then the residents might find that they could not afford to enjoy them, as the median household income is a miserly $27,835. At least those with a job have the option to spend their hard-earned cash on leisure activities, which is more than can be said for the 10.7 percent of people who are unemployed or the 22 percent who are living below the poverty line. Those who try to move out of the area for a better life will probably not get much more than $107,400 for their home, as this is the average for the area.

Safety in an area is a huge concern for many people when they are deciding where to live, and it is the lack of safety in Whiteville that is off-putting. It is one of the ten most dangerous places to live in North Carolina, and the risk of becoming a victim of property crime is an alarming 1 in 10. Another issue in Whiteville is a lack of employment opportunities, which has led to high unemployment rates and means that many people are struggling to pay their bills.

The economy in Gaston, North Carolina, is in dire straits. Not only is there a high unemployment rate, but the median household income is depressingly low at under $32,000. House prices often reflect an area’s desirability, as a huge demand to live in an area hikes up the prices, while a lack of demand means that property prices hit rock bottom. That is certainly the case in Gaston, as the median home value in this location is just $60,900. While this means that Gaston is an affordable option, those who buy property in the area do not have a lot to look forward to in their free time, as entertainment and recreational activities are limited.

Neighborhood Scout lists Georgetown as having some of the highest crime rates in the Carolinas, which is why it is the second-worst place to live in South Carolina and the fourth-worst place to live in the Carolinas overall. While the average risk of becoming a victim of violent crime in South Carolina is 1 in 196, the rate is 1 in 82 in Georgetown. While the crime rates are one of the most significant problems, the area also has other issues that make it undesirable. More than a fifth of the population is living in poverty, the unemployment rate is high, household incomes are low, and there is a lack of activities and attractions in the area.

As it is only a small town with just 1,377 residents, you might expect that Watts Mills is a location with a strong community and small-town charm. However, this is far from the case as Watts Mills is the worst place to live in South Carolina. For such a small place, it has an alarmingly high crime rate. Something that is possibly even more shocking is that 55 percent of the town’s residents are living below the poverty line. However, on learning that 18 percent of the population are unemployed, you may find the poverty rates less surprising.

While it may once have been a nice place to live, the problems in Wadesboro are growing year on year, which is why it is the second-worst place to live in North Carolina. Unfortunately, both violent crimes and property crimes are on the increase in this small town, which has 5,305 residents. In 2020, statistics showed that residents had a 1 in 53 chance of becoming a victim of violent crime. Unemployment and poverty rates are also on the rise. Therefore, it is best to look elsewhere for a place to call home.

If you are trying to form a list of the places best avoided in the Carolinas, then make sure you add Yanceyville to the list. According to Road Snacks, Yanceyville is the worst place to live in North Carolina. Alarmingly, the poverty rate in this small town is 47.9 percent, and this is probably linked to the 16.8 percent unemployment rate. Even those who do find work are unlikely to receive a salary above $19,000 a year. Sadly, that is not the end of this town’s troubles, as the residents suffer from a lack of activities to enjoy in their free time.