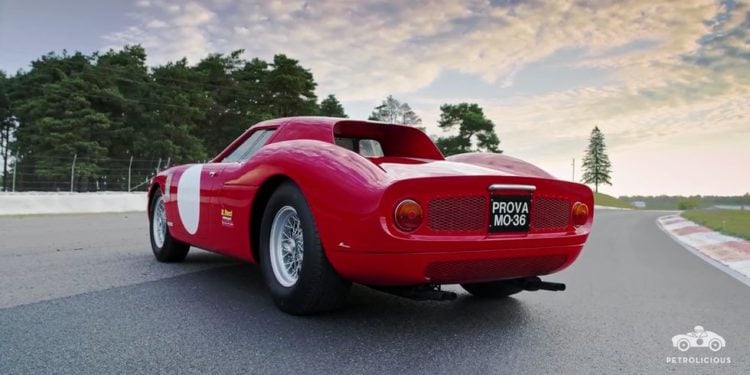 Being both creator and designer of the most coveted and admired automobile in the world was a tough job, but somebody had to do it. So in the mid-1940s, racecar driver Enzo Ferrari of the Scuderia Ferrari racing team, decided that the burden should fall on him to get the job done. His love for racing fast, beautiful cars began in 1908 when his father took him to his first race. That incident, combined with his brother and father incessantly conversing about the sport, managed to plant a seed of desire that grew fast and strong in the years to come. By the time young Enzo saw his next race, a year had passed, but he was immediately addicted to every aspect of the race experience, from the smells and the sounds, as well as the sight of the cars as they flew by like lightening on the ground.

But the race ended and life went on. After stints in opera and journalism, he was drafted into the armed forces in 1917, which he returned from due to being severely ill and needing long-term hospitalization. In the mid-twenties, Ferrari traveled to the city of Turin to try to get a job with the premier company, Fiat, but was rejected, prompting him to go to Milan. It was there that he was taken on as a test driver for automaker Costruzioni Meccaniche Nazionali.\Soon, Ferrari was promoted from testing to actually racing, which he did for the company for a year, but his passion for the automobiles themselves really caught fire after he drove an Alfa Romeo at the Targa Florio in the ‘20s and brought it in at 2nd place. After years of racing and perfecting his race game, Ferrari found himself desiring something more substantial: He wanted to actually contribute to the automobile itself. His perspective had broadened, and after several more years of blood, sweat, and tears with Alfa Romeo, as well as countless collaborations with other auto professionals and engineers, the Ferrari Motor Company was born in the early forties. The very first car they produced was the 1947 125 S…the rest, of course, is history.

The year is 1960, and Ferrari has made its status as a legend strong and enduring already. Between the years of ’49 through ’61 Ferrari managed to win the races at Le Mans five separate times, and were still very much involved in the racing world, as far as their vehicles went, competing against such vehicles as Mercedes, Alfa Romeo, and Jaguar. But Enzo Ferrari had more than what was the usual on his mind. He happened to have an unshakable confidence in the configuration of the V-12 engine, and this was what drove him. After spending years developing high-performance race cars, but he knew that road cars were also the way to go, and he was developing that idea. But suddenly 1964 arrived, and that was when the Ferrari 250 LM was released. It would prove to be one of the greatest and most sought-after Ferrari’s of all time, as we will soon see.

By the time the latter part of the fifties rolled around, the engineering of race cars was changing drastically, thanks to improved understanding and technology. It was during this time period that Ferrari began to test a V-6, 1.5 liter mid-engine just to keep his head above water as far as the competition went. But when American driver Phil Hill took the World Championship for Ferrari in 1961 driving a 156-F1 mid-engine that Enzo began to see things in a much brighter light. He aimed at designing a mid-engine 250 P sports racer with a 3-liter V-12, and the car wound up winning the ’24 Hours of Le Mans’ in 1963. This car became the primary predecessor to the 1964 250 LM.

The 250 LM, to put it simply, was ‘born’ to race. It came off the production line equipped with the V-12 that Ferrari was so determined to use, which put it on the opposite end of the measuring stick from the 250 models which came before it. Not only was it a hit on the racetrack due to its horsepower and ease of handling, but it soon became known as the greatest Ferrari every produced, and is still strongly considered so by many today. This fact alone has solidified its spot in race car history and made it a firm legend in the eyes of Ferrari lovers the world over.

The following are the original specs for the 1964 Ferrari 250 LM, with some simple notes that will show any changes that may have taken place over time to improve performance. Because this is one of the most iconic race cars in history, you may be surprised at some of the simplicity of the vehicle’s mechanics and all-around engineering. We figure that was the way that Enzo Ferrari wanted it to be.

1. Features (these are listed according to the standard specs at the time of production and release)

Also, his Le Mans version was one of only 32 of its kind produced…another factor contributing to the compulsion to spend that kind of money. The fact of the matter is this: In order for the 250 LM to be legal to race in the ‘GT’ category, Ferrari was required to produce over 100 of these cars. The did not, and were therefore it was entered into races as a prototype, which was nothing more than a technicality which allowed it to be race. Interesting fact, to say the least; at the most the tidbit adds value.In 2015 this particular 1964 Ferrari 250 LM sold for this amount, and it sold easily. Referred to by lovers of the car as the ‘Quintessential Ferrari’, It exudes all aspects of its existence through its very appearance. Its power and sleek handling and speed can be seen, almost tangibly, so when it’s truly loved, well, I suppose that $18+ million is a small price to pay, if you have it laying around. But is the 250 LM Worth It…Really? And this is the question of the day, isn’t it? When there is so much wrong in the world, how appropriate is it to spend that kind of money on a car that is more than fifty-years-old? I do have an answer, I believe, and this is it: If one has the money, then it’s none of our business.

If I had the money, well, you bet your tail end I’d do it. This is a beautiful, rare vehicle with an irreplaceable history and a winning record to match. It can be driven on the street and will get you dates faster than the babysitter’s boyfriend runs out the backdoor when you get home in it. With that being said, there are just too many incredible points here to be ignored. The rich history of this car is only the beginning, and it’s enough to grab you if nothing has up until now. Then you have the 250 LM winning races and blowing minds over and over. Add to that the fact that this car, the one that sold for $18.26 million, is one single car out of a mere 32 that were made by the renowned company. Plus, it looks as smooth as ever with its race car-type paint job and silky-smooth aesthetic, and that puts it over the top. So, with all this great information in mind, and since the buyer actually had the money in his wallet, I’d say that the incredible, dynamic 1964 Ferrari 250 LM is…well…MORE than worth the price.