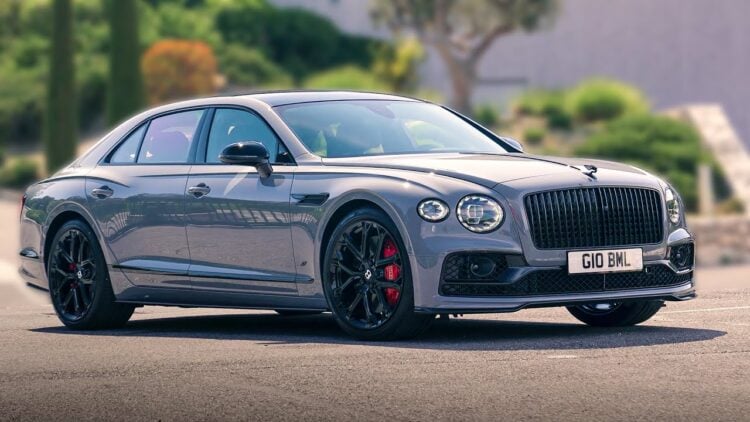 The 2023 Bentley Flying Spur S is a luxury sedan driver-centric car that emphasizes performance. It is easy to identify this car since it lacks an exterior chrome. Many of its parts are covered in gloss black such as the lower front fascia, grille, window trim, and mirror caps. Its taillights and headlights also contain dark tints for a more menacing appearance. Inside the car is a two-tone color scheme (red and black) composed of leather and an ecological suede-like material called Dinamica. According to Vyva Fabrics, Dinamica is made of recycled polyester from plastic bottles and polyurethane fibers. The car’s headrests contain the “S” embroidery, which you can replace with Bentley’s winged logo for free. There is still much more to be said about this car on its technical side. So, below are five specifications of the 2023 Bentley Flying Spur S.

This car has two powertrains to choose from, and we can start with the 4.0-liter twin-turbo V-8 one. The powertrain lets the engine growl since it is connected to a sports exhaust. It delivers 543 hp and 568 ft-lbs of twist. As a result, it enables the car to accelerate from 0 to 62 mph in 4.0 seconds. The other option is a 2.9-liter, hybrid-assisted V-6 that churns out 536 hp and 553 ft-lbs of torque. This particular powertrain propels the car from 0 to 62 mph in 4.1 seconds. Both powertrains run with the 8-speed dual-clutch automatic transmission. The speed transmission has two gears, each operated by a separate clutch. Generally, this gear system does not need a clutch pedal. According to Cars, it does not need a clutch since it uses a transmission control module that shifts it automatically.

The system allows you to turn all four wheels with the steering wheel. Essentially, the engine distributes power to the wheels. The main purpose of this steering system is to increase the car’s stability and agility. When you drive at low speeds (under 40 mph), the rear wheels turn slightly in the opposite direction as the front wheels, and the phenomenon is called “counter-phase steering. This results in the car having a small turning radius, thereby increasing agility. On the other hand, at high speeds (over 40 mph), the rear wheels turn slightly in the same direction as the front wheels, called “in-phase steering.” This phenomenon causes the car to lean less in and out of a corner, achieving stability when turning corners at high speeds.

The Bentley model has a level body, meaning driving on rough terrains would be troublesome. The engineers split the car’s anti-roll bars into two and fit electric motors between the halves to have some off-road capability. This method of splitting the anti-roll bars is what Bentley termed the “Bentley Dynamic Ride” system. The system delivers plenty of power since it uses planetary gear sets that multiply torque. According to Car and Driver, it supplies 959 pound-feet of torque to each anti-roll bar. The anti-roll bar ends press down on the outside wheels while also lifting the inside wheels. Due to the equal and opposite forces on the wheels, the chances of the car rolling are minimal. Besides preventing rolling, they also offer comfort. Since the wheels get lifted as you navigate rocky terrains, you will not feel the impact of the bumpy paths.

For the longest time, steel was the default choice for wheels. Nowadays, more car companies besides Bentley are making their cars with aluminum wheels. First, these wheels are efficient in terms of fuel economy since they are much lighter than steel wheels. Due to their lightweight, they make the resulting car light. That means you will use minimal effort to move the car, which means you will use less gas to push the car. That is unlike the case with steel wheels, which need plenty of gas to move such a car. Aluminum wheels are actually an alloy (aluminum and nickel), which means they are stronger than steel wheels. That means they are able to endure force without getting damaged. Therefore, you can use them to carry heavy loads. With less susceptibility to damage, the wheels retain their new look for a long time.

The car has a curb weight of 5,137 lbs. Curb weight refers to the car’s weight without any passenger or item. On average, most cars have a curb weight of between 3100-3400 lbs which makes this car heavy. Some people prefer light cars for the speed factor and would never think of purchasing a heavy car. However, cars with a higher curb weight share certain advantages. First, cars with a high curb weight have more momentum. To understand how we can talk about the car’s movement in case of a collision. When such a car is hit, it will not be thrown off the road. The same cannot be said for lighter cars. The driver could get seriously injured when the light car is hit and thrown off the road. That is because the car continues to skid or roll and only stops when it hits an object. Also, the car’s high curb weight plays a role in providing a comfortable ride. For instance, when a heavy car drives over bumps, you will not feel a severe impact from them. However, they can only effectively offer smooth rides if they have a proper suspension system. Fortunately, this car runs on a double wishbone suspension system.

What is not to like about the 2023 Bentley Flying Spur S car? First, it uses aluminum wheels and a nice red and black colorway, making this car sporty. So, you will be won over by the car’s aesthetics. However, you will even be more impressed with what it offers functionality-wise. This is one of the most comfortable cars you can ever get. For instance, with its high curb weight and Bentley Dynamic Ride feature, you can understand how they enhance smooth rides. So, you will no longer have to worry about nearly falling off your seat after hitting a bump. 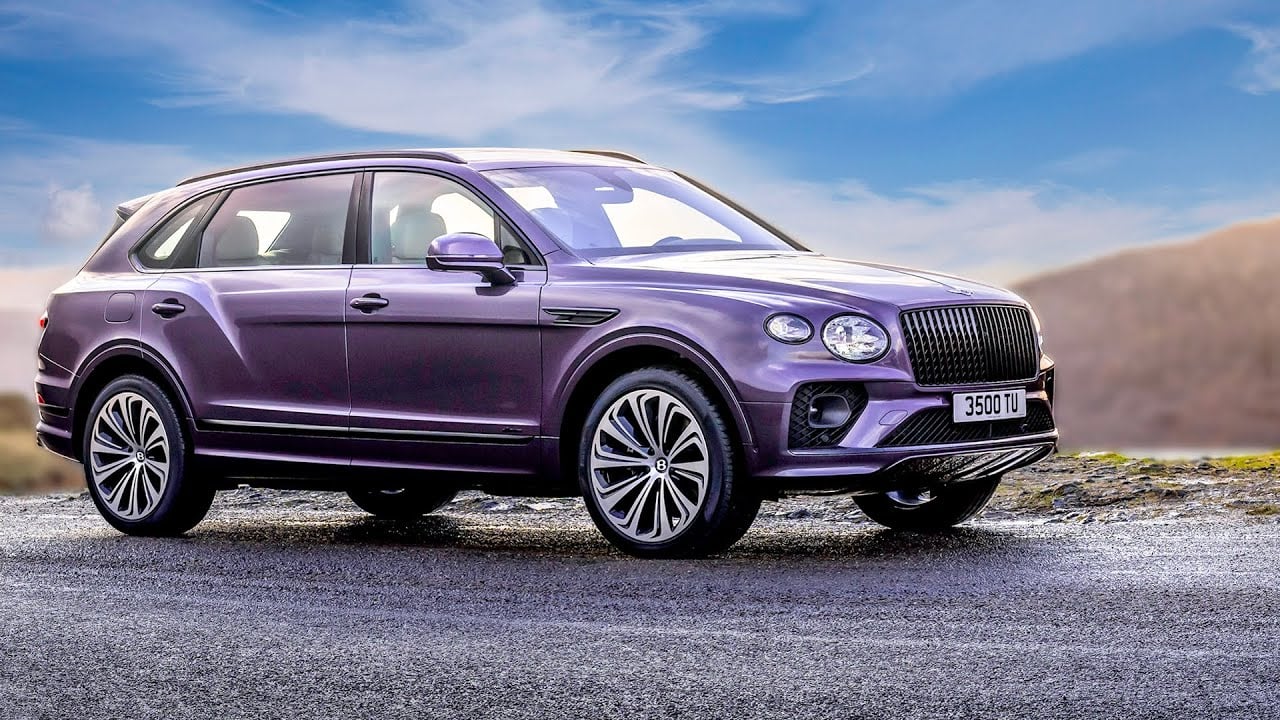 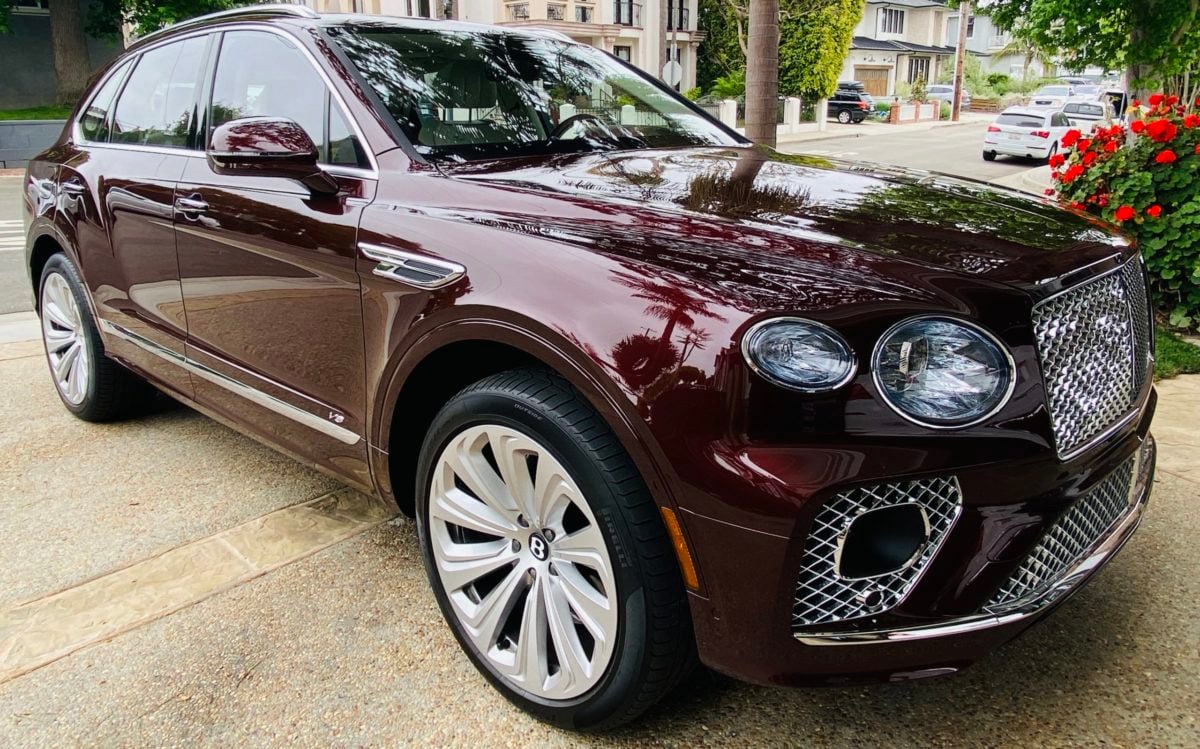 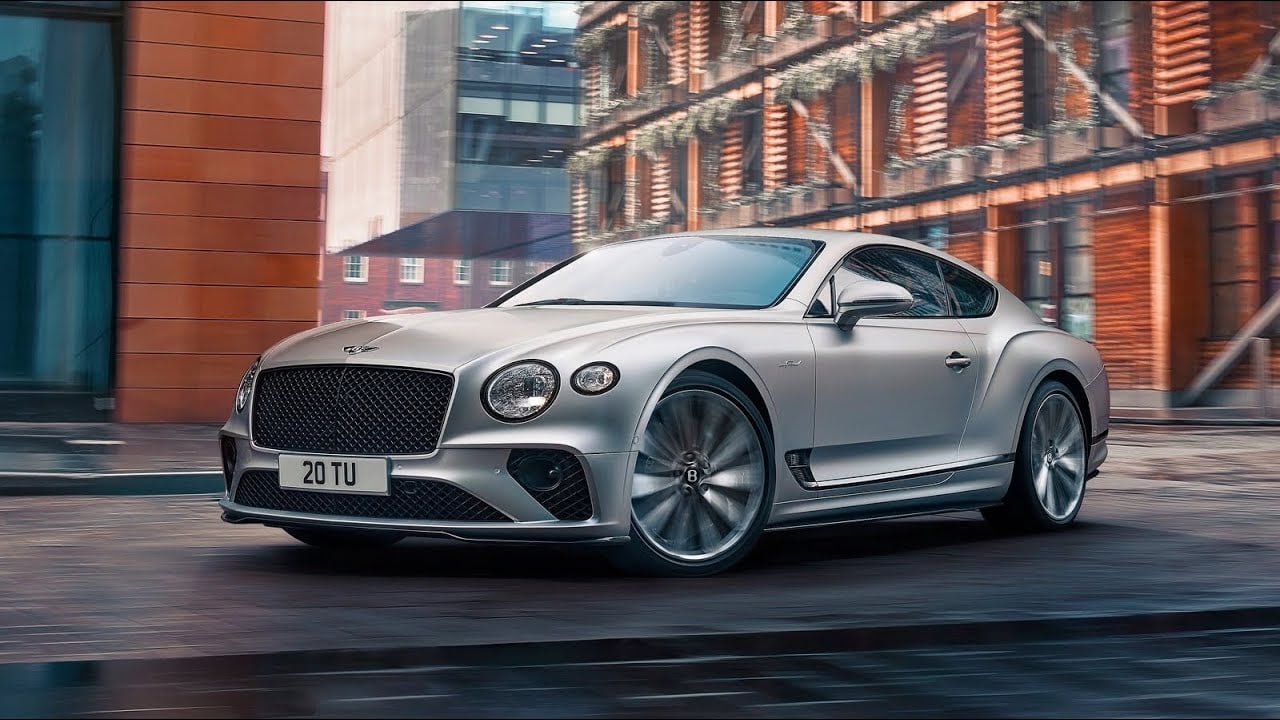 The 2023 Bentley Continental GT S is a luxury cruiser and convertible. Since this car is relatively heavy at 4,773 lbs, it will only run on a twin-turbocharged 4.0-liter V-8 engine. In terms of the… 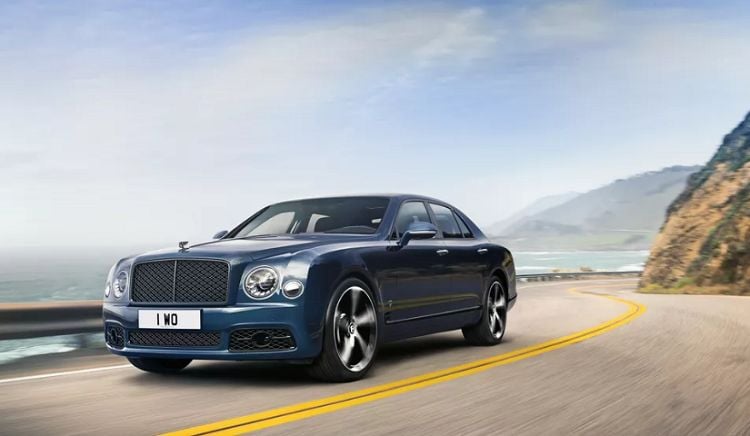 After years of continuous production, Bentley is, at last, stopping the production of one of its most iconic cars to date. To go out in style, the company is producing a limited edition of the… 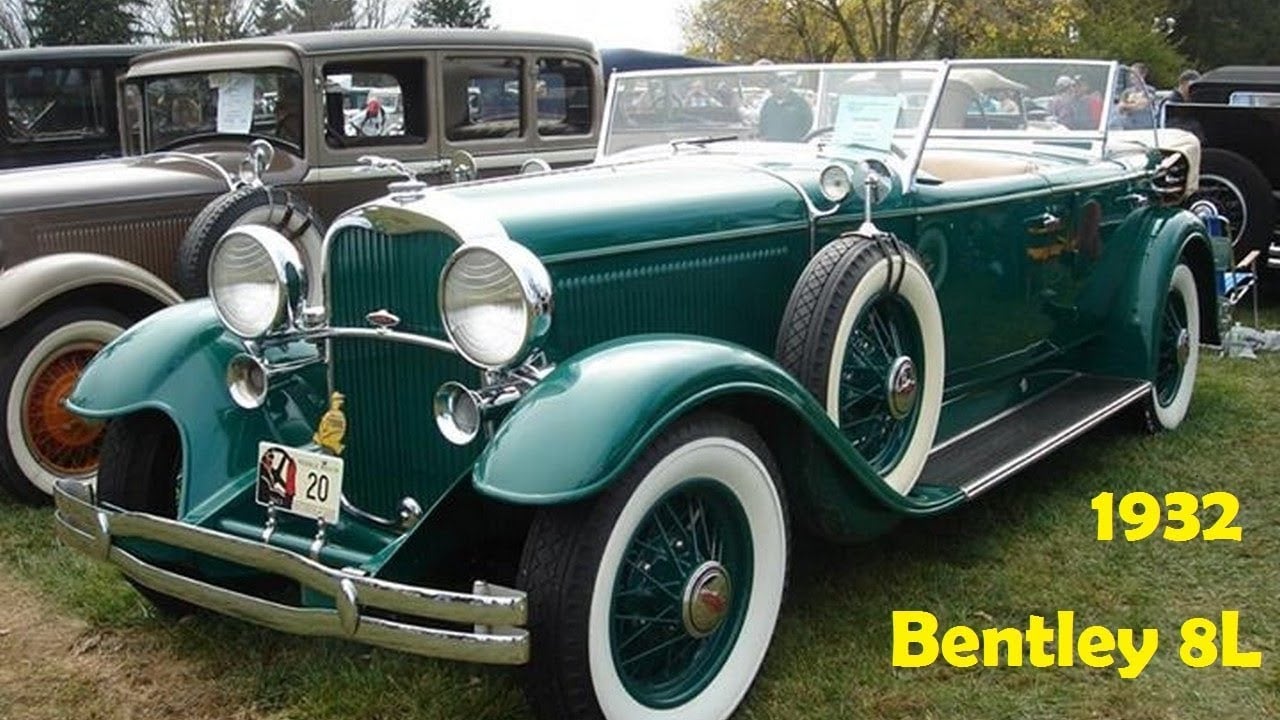 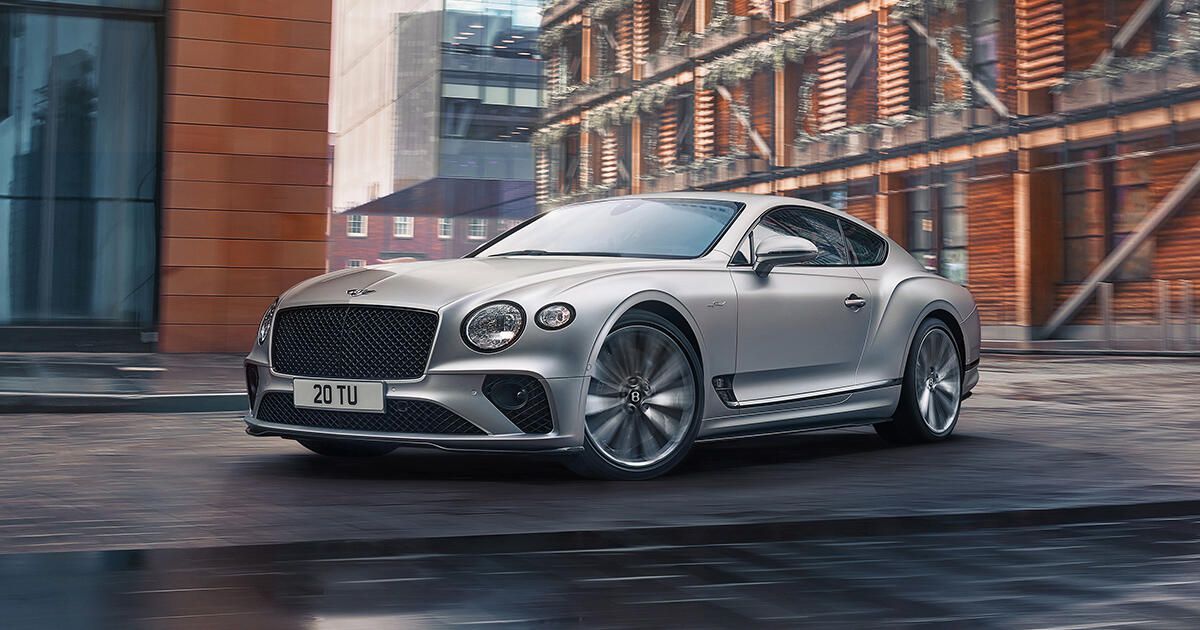 What person in their right mind wouldn’t want a chance to drive a brand new Bentley? After all, these cars have had a reputation for expressing the epitome of both luxury and performance for decades….