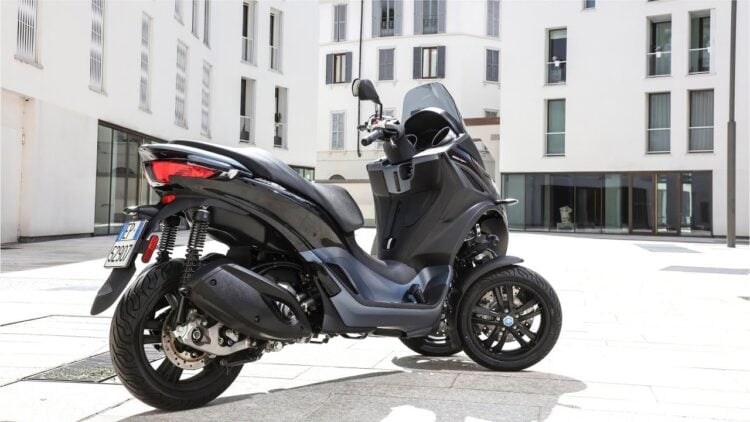 The 2023 Piaggio MP3 three-wheeled scooter is sure to grab your attention the first time you see it, even if you don’t really consider yourself a person who is fairly keen on motorcycles. It looks like one of the fastest motorcycles to take the road in some time, yet it does indeed have three wheels. This opens up a whole new level of possibilities for people who have always wanted to ride a motorcycle, yet have also found themselves a bit on the timid side when thinking about actually doing so. If you’re interested in learning more about this sleek, powerful looking and unique vehicle, then it’s time to take a closer look.

If you’ve been following this particular line of vehicles from Piaggio for any length of time whatsoever, you know this is not a brand new design. Instead, it is a reimagining of previous models, one where the company has made some considerable changes. For example, the design for the new 2023 model is sleeker and more aerodynamic than the one used for previous models. The three-wheeled scooter also has a wider stance, making it more stable around corners and on rough roads. Somehow, Piaggio has managed to give it that wider stance without making it look completely ridiculous. As a matter of fact, a lot of people would go as far as arguing that this newly redesigned model is the best-looking one out of the group. There are also a few other minor tweaks, such as a wider front grille and turn signals that have been integrated into the wheel wells on the front of the scooter. According to Piaggio executives, this was something that was done to maximize the amount of space available on the scooter. In addition, it’s a popular style right now on all types of automobiles. As a result, the designers at Piaggio thought that it would be a good idea to go ahead and incorporate this type of styling on the scooter as well. By all accounts, it seems like they made the right decision.

If you think that the styling is the only thing that Piaggio changed for the 2023 model, think again. Remember, this particular vehicle is a complete re-imagining of previous models. Therefore, it only makes sense that a number of things have been changed, as is the case when you really start to dive deeper into this particular model. For instance, the company decided to upgrade the engine, changing the previous 493cc engine out for a brand new 530cc model. It’s interesting to know that according to Piaggio, the horsepower is the same with both engines. However, there are several other advantages to the newer, larger engine used on the 2023 model. For example, this engine features more torque, meaning that more power is actually getting to the wheels so you’re capable of utilizing more of the horsepower being produced by the engine. While that might be important to some, it’s definitely not the most important thing to a lot of potential customers. Other advantages of this newer engine include reduced vibration, less noise and increased fuel economy, despite the fact that the engine itself is bigger than the previous model. All in all, you’re getting an engine that is capable of running quieter without shaking the fillings out of your teeth and you can go further on a single tank of gas then you could before. At the same time, you’re actually utilizing more of the raw horsepower that the engine is producing as opposed to literally spinning your wheels. It’s hard to argue with that logic. Even those who initially scoff at the idea of including an engine with larger displacement that offers the same horsepower often find themselves with nowhere to stand in that argument, once they find out all of the other details of this particular engine swap.

Of course, it wouldn’t be possible to talk about a complete reimagining of design without talking about the new technology that Piaggio is incorporating on its latest MP3 model. Previous models had analog dials, something that hasn’t been featured on a lot of vehicles for a number of years now. It’s also one of the major complaints that owners of these previous models list, as there aren’t very many people that are a fan of these types of analog systems. Piaggio corrected all of that with the 2023 model, replacing those outdated dials with a brand new TFT display that is seven inches wide. Here, you can listen to music, integrate your smartphone into the system and get full navigation just like you would in any fully-enclosed automobile. It truly is one of the major benefits of purchasing this particular vehicle. Just in case you’re wondering, another major benefit is directly related to the fact that this vehicle has three wheels instead of two. In most places around the world, that small fact is it really so small because it allows you to operate the vehicle even if you don’t have a motorcycle operator’s license. That’s right, most places will allow you to operate it just like you would an enclosed automobile and you can do so with nothing more than a car license. That’s a huge factor for people who have thought about the freedom often associated with riding motorcycles for some time, yet aren’t convinced that they would do it often enough to be worth their while when it comes to getting an entirely separate license.

Piaggio has always been associated with high-quality vehicles. It doesn’t matter what the particular subject is that’s in question, people know that they’re going to get something that is capable of performing well and going the distance whenever they purchase something made by Piaggio. The company is merely continuing that legacy of greatness with this particular model. By all accounts, it looks like the 2023 model will become one of the most sought-after Piaggio MP3 scooters ever built.