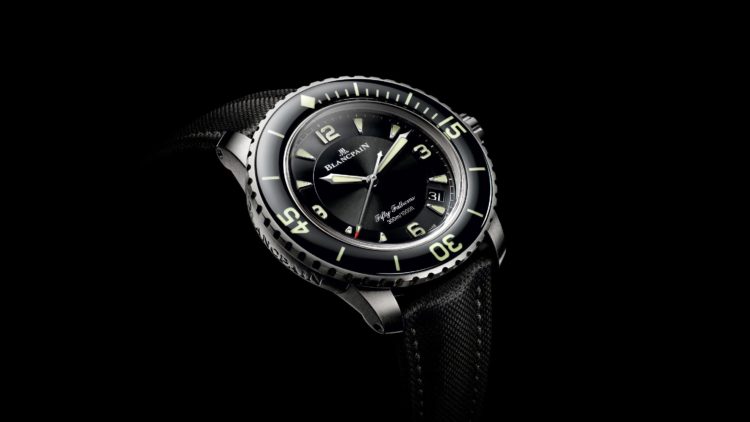 One of the most beloved dive watches ever offered was the Blancpain Fifty Fathoms. It made its first appearance in 1953 and has remained a classic ever since. Now, for 2019, there is a new and more modern expression of the original vintage diver that is just on the horizon. We’ve been privileged to have a sneak peek at the upcoming new masterpiece and it’s a lovely and simple iteration in black with a soft sophistication and a simplicity that betrays its inner workings. The Blancpain Fifty Fathoms Automatique Titanium is the new iteration of the vintage piece and it bears the DNA of its distant relative, maintaining family ties but offering the best of its own unique personality to a new audience, ready for a remake. This watch is truly deserving of a much closer look and careful inspection.

The case, bezel and crystal

The round shape of the case remains unchanged from the original. As does the 45 mm diameter size and the 15.4 thickness of the case. The materials differ in the new expression of the watch. It’s made of titanium. The case is topped with a moderate sized bezel in a polished black finish that is attractively treated with lume that gives it low light legibility and also acts as a nice contrast against the black finish. The sapphire crystal insert covers the dial with crisp clarity.

The case back of the watch is a screw down type and it bears a partially skeletonized cover with an inset interior cover in titanium material that reveals a small portions of the inner mechanical workings of the watch. Engraving of the brand and statistics are also featured on the case back for a pleasing aesthetic when you flip the watch over.

The dial is presented in a deep black background with reflective triangular essence of patterns that is noticeable when the light reflects off of it at the right angle. The indexes are applied and treated with Super LumiNova. The hands are uniquely styled with a beveled aesthetic and a chunky design that tapers to stylish fine points. The white coloring of the font beneath the 12 o clock position that announces the brand of the watch is applied with a classy stylizing with the cursive and more petite name of the watch just above the 6 o clock positioning. The side of the case bears the engraving of the Blancpain brand. 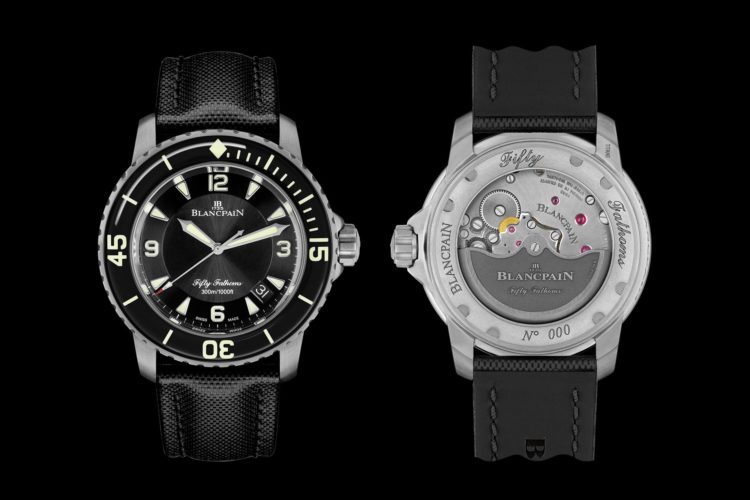 Themovement of the Blancpain Fifty Fathoms Automatique Titanium is a caliber Blancpain 1315. It’s an automatic winding type with 35 jewels and three mainspring barrels. The diameter of the movement is a generous 30.60 mm which accounts for the larger size of the diameter and thickness of the case and dial. The watch is crafted with three mainspring barrels and it offers hours, minutes, seconds and a date function. This watch is waterproof as its name suggests for up to fifty fathoms.

The Blancpain Fifty Fathoms Automatique Titanium is fastened to the wrist via a black fabric strap with matching hardware that complements the materials of the case.

The manufacturer has not yet revealed the release date, nor the expected retail price of the Blancpain Fifty Fathoms Automatique Titanium as of this time. We believe that it will be released at sometime in 2019. Until more information is available, check with your local authorized dealer periodically for updates.

The Blancpain Fifty Fathoms is the 1953 predecessor of the new iteration and it established a tradition of excellence that we’re expecting after the new model is released. There have been multiple examples of the watch released through the decades with variations in the complications, size and colors. A total of 80 have been released but this is the first to be created in black. Although large in its width and depth, we’re told that this watch is easy to wear on the wrist. It’s a high-quality luxury watch that features an in-house movement so we’re expecting it to be offered at a premium price. Sometime in the near future, we’ll be able to assess the impact that the new version of the Blancpain Fifty Fathoms will have on fans of the original model and we suspect it will become a new classic in the making.