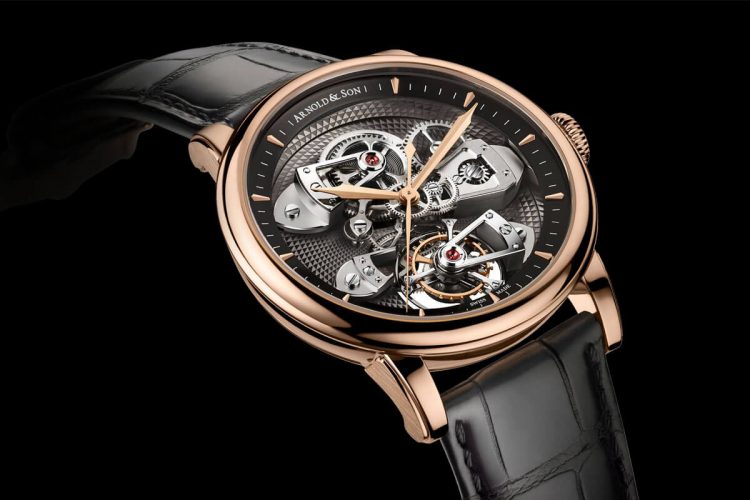 Arnold & Son was founded in 1764 in London by John Arnold. He was born in Cornwall, the son of a watchmaker and the nephew of a gunsmith. He completed his apprenticeship as a watchmaker, showing interest at a young age in precision metalwork and engineering. He traveled to the Netherlands when he was 19, and returned two years later, fluent in German. He established his watchmaking reputation by his mid-twenties, working in London’s Strand. He presented the smallest repeating watch ever created to King George III and his court, rapidly increasing his wealthy clientele. He held patents for a helical balance spring, a detent escapement and a bimetallic balance.

Arnold, and his son John Roger Arnold, created a successful firm, which became the leading suppliers of the Royal Navy’s timepieces, such was the accuracy of their chronometers. After Arnold died, Abraham-Louis Breguet, master watchmaker, presented his son with a tourbillon escapement which was mounted in one of the senior Arnold’s earliest pocket chronometers. This watch is in the British Museum. Arnold, the son, formed a partnership with London clockmaker Edward Dent, and when Arnold died, Charles Frodsham took over the brand.

The Arnold & Son legacy is filled with historical firsts in chronology, horology, astronomy and maritime exploration. It is a fascinating history filled with stories carried forward on the strength of the names and reputations of the passionate watchmakers whose lives shaped the tales and the world.

With a history stretching back hundreds of years, the timepieces which were landmarks for Arnold & Son are either in museums, private collections, lost, or completely renovated beyond their original design. But an amazing example of their historic work was recently sold for a staggering amount.

On July 7, 2016 John Arnold’s 23/78 Chronometer set Sotheby’s record at auction. The watch sold for $722,318 USD during Sotheby’s two-part auction series which were completely dedicated to watchmaking in the English tradition.

The pocket watch was completed in 1781, and features several inventions by John Arnold. Outstanding features include

The timepiece is the only known example to have never undergone restoration of any kind, surviving in its exact original condition. The movement, enamel dial and silver case, and all parts are perfectly untouched and intact.

In the legendary firm’s modern era, the focus has been on manufacturing timepieces in keeping with the significant historical developments of the past, the finest craftsmanship and artistry, and moving forward with ever-improving technological advancements. The firm is distinctive, in that each caliber is made specifically for a particular timepiece. This practice was begun with John Arnold, who decidedly strove to make precision improvements with each timepiece he created. Arnold & Son has noted the following ten models as significant to the company’s history and production. 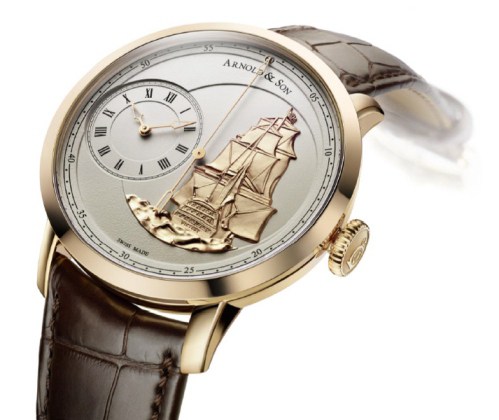 This set was inspired by timepieces created for King George III and his royal court. The set displays the excellence of the brand’s hand engraving in decorative, classical English style. Three views of the HMS Victory are depicted. She is famous for her part in the American War of Independence, the French Revolutionary War, and the 1850 Battle of Trafalgar as Lord Nelson’s flagship during the Napoleonic wars. Each of the three models in the set have A&S1001 calibre power, finished with haute horlogerie. The HMS Victory timepieces will first be available in only 28 sets of the three timepieces, as an exclusive limited edition. 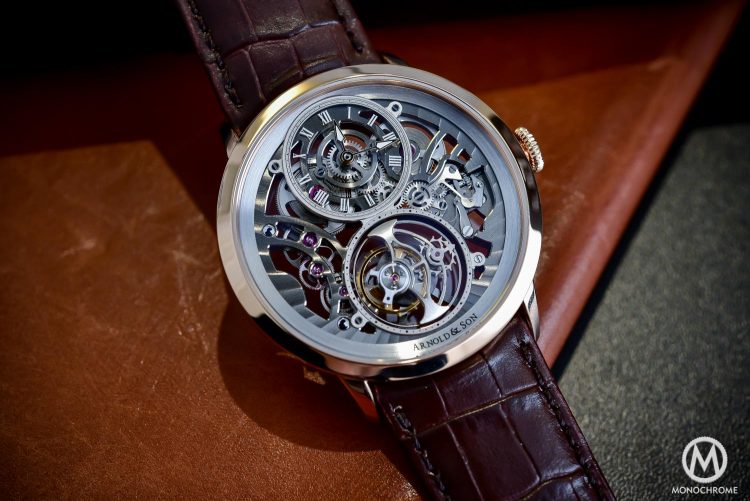 This newest addition to the Instrument Collection features an A&S8220 new movement. It is the most-thin skeleton watch with tourbillon complication currently available for sale. With a thickness of 8.34 mm, it was created at the La Chaux-de-Fonds house. The case is an elegant red gold, combined with an exhibition back. It is a limited edition of 50 timepieces. This men’s watch comes with a full factory warranty, and the firm is currently taking pre-orders. Newly added to the Instrument Collection, the set includes three watches which combine aesthetics with precision. The set models depict the vessels of the East India Company, which were known as the East Indiamen. These vessels were significant in that they established the company’s reputation for trading excellence. The timepieces feature dials with miniature painting and mother of pearl accents, all done meticulously by hand. The famous TB88 reflects Arnold & Son’s ongoing quest to develop state of the art technology within the context of English design. This timepiece pays tribute to Arnold’s passion for precision chronology, but also his brother’s work as a respected gunsmith. The two traditions are referenced in this timepiece. The model is a new member of the house’s Royal Collection, which combines the innovative technology with classic styling. This timepiece displays the perpetual phases of the moon, and deviates only one day over 125 years of time. The moon is shown as it truly appears to someone viewing it from the Northern Hemisphere. It is an accurate and fascinating view.

What brings this watch alive even more is that its dial face is made from a precious meteorite found in Arizona. The surface as scarring, but it is steel hard. It brings an element of scientific, unexpected flair to the timepiece. In 2012, Arnold & Son marked the Year of the Dragon with its limited edition rose gold timepiece adorned with a three-dimensional gold dragon. The Chinese calendar includes the Dragon every 12 years. In Chinese mythology, the Dragon is divine, powerful and signifies good fortune. The dial of this watch features one dragon from the Nine-Dragon Wall located in Beihai Park. This imperial garden is northwest from Beijing’s Forbidden City. It was 1764 when the Wall was finished, eight years before 1764, when Arnold opened his London Strand clock making studio. Many Asian cultures view eight as an auspicious number.

The timepiece dragon was engraved by hand, and the craftsman specially selected for his expertise in the process. The dragon is sculpted from solid 22 carat gold, and mounted on a black lacquer dial with an extremely thin case. The timepiece is available in either rose gold, or rose gold with an exclusive bezel set with diamonds. A black alligator strap completes the dramatic appearance. This limited edition timepiece celebrates the 250th Anniversary of the brand. Only 50 timepieces will be created as a tribute to the British history and Swiss craftsmanship unveiled in richness and quality by Arnold & Son. DSTB stands for Dial Side True Beat, which is one of the complications produced by John Arnold when he and his son worked together. They were able to produced marine chronometers which were reasonably priced, yet technically superior. Their precision helped many to accurately determine longitude while on the sea.

What makes this model unique, is that the entirety of the seconds’ mechanism is entirely located on the dial side, with the true beats lever shaped as an anchor in tribute to the maritime accomplishments of Arnold. The caliber is A&S6003, which is self-winding. The mechanism is housed within a red gold case which is 18 carat and 43.5 mm.The caseback is made from sapphire crystal, which has anti-reflective coating for complete viewing of the interior movement. It has a water resistance of up to 30 meters. The strap is made from brown or black alligator leather which is stitched by hand. The symmetrical front, back, horizontal and vertical presentations of the Nebula are likened to beautiful facial symmetry. The timepiece has a completely openwork movement which allows the viewer to see past its attractive face into its beautiful interior. The caliber is manufactured in-house, and the holistic, meticulously calculated ratios and proportions of the watch blend harmoniously within the case. Rather than covering the movement, the dial serves as a bridge to support intricate gearing inside. There are also ten movement bridges. It is a complex caliber, considering that standard watches generally have only four bridges. The Latin name of Nebula was chosen because the sculptural mechanism appears to explode from the center, in a similar way that exploded stars are born in the universe. In honor of Arnold & Son’s long and prestigious history as the Royal Navy’s supplier of precision marine chronometers, the Hornet James Cook Set was created and issued in 2011. Captain James Cook made three Pacific Ocean voyages, and these are commemorated in full color in miniature paintings on the dials of these three timepieces. They include 25 limited edition sets of three, including “Hawaii”, “Antarctica” and “Botany Bay”.