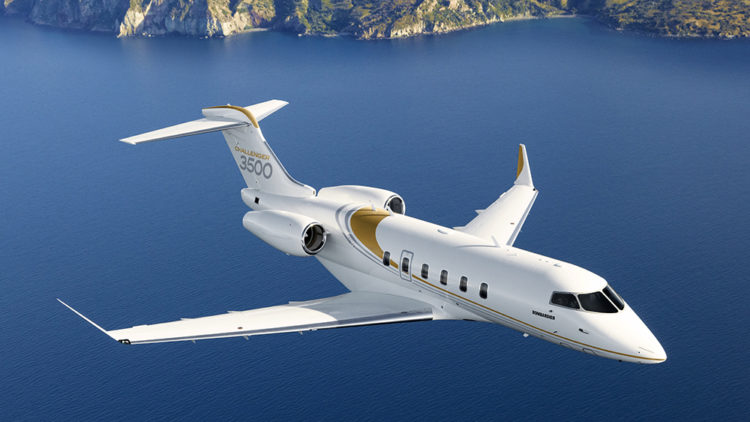 Business jets have been an important component of getting from point A to point B in the shortest amount of time possible for decades. However, there hasn’t been a great deal of advancement in the way that the interior of these jets is designed in a number of years. That is, until the Bombardier Challenger 3500 came into focus. On the outside, it looks like a lot of other business jets. It’s clean, sleek and aerodynamic with winglets on the tips of its wings that give it extra aesthetic, as well as some added control during flight. On the inside, it’s a whole new ballgame. That makes this jet one of the most important examples to come along in quite some time. In order to get a better understanding of what makes this jet so special, it’s time to take a closer look.

Zero Gravity Seats- On a Jet?

There are a number of things that distinguish this particular jet apart from the competition, not the least of which involves the inclusion of special zero gravity seats that are designed specifically to take the pressure off of the lower back. Anyone who has ever spent hours on a business jet knows that they don’t offer the most comfortable seating in some cases. This is especially true if you’re on one of those jets where the seats scarcely move and you’re more or less stuck in one position throughout the entire flight. When Bombardier redesigned this jet, they made the decision to include a number of important changes and this was at the top of their list. They wanted to create something that would give passengers true flexibility when it comes to comfort. The seats move throughout a full range of motion, allowing you to sit upright in order to get your work done and then, with the touch of a button, they can be reclined all the way back into a zero gravity position so that you can give your lower back the much needed rest it deserves after sitting up and staring at a computer screen for hours. The design team at Bombardier even went as far as purposefully creating extra space underneath the seat so that while you are working, you can bring your feet all the way up underneath you so that you can stretch your back out without losing productivity. It may not seem like that big of a deal, but it’s one of the first times that any type of changes to the eating design has been made on a business jet. That fact alone makes it more desirable than a lot of the other jets that are out there, largely because it’s both more comfortable and better for your health.

Another small change that the company made to the jet that makes a big difference is the fact that you can charge your devices almost anywhere. That has not always been the easiest thing to do on a lot of jets but now, you can charge your devices without the need to even think about it. In addition, Bombardier decided to create a voice command system that allows you to control everything from the temperature to the lighting conditions. Now, you can fully control the ambiance inside the cabin without having to touch a single button. Just in case you’re interested, there’s also a massive 4K screen that takes up an entire wall, giving you the chance to watch your favorite movies or stream your favorite television shows with ease. It’s so big that you end up feeling almost like you’re in a flying movie theater as opposed to sitting in a private jet.

If you think that the only important features on this jet are related to comfort and convenience, think again. This jet is capable of performance that far exceeds a lot of the competition. For example, it’s capable of traveling an astonishing 3,400 nautical miles without having to stop for fuel. That’s a lot further than many business jets in its class. In addition, it’s also capable of achieving a speed of Mach 0.83. That’s roughly 882 kilometers per hour, more than fast enough to get you where you’re going with time to spare. Furthermore, the jet is capable of seating 10 people comfortably in addition to the crew. That gives you more than enough space to bring co-workers, family or friends along for the ride, depending on where you’re going and the purpose of your trip. One thing is certain, you’ll rarely be forced to decide who gets to go and who has to stay behind whenever this particular jet is involved. There is typically more than enough room for everyone, even when everybody onboard wants to spread out and get comfortable.

An Update on an Old Favorite

This jet seems like it’s entirely new, but the reality of the situation is that it’s actually an update of a trusted favorite made by the company, the Bombardier 300. When the company decided to make all of the updates, they decided to take things to the next level and rename the jet as well. This is largely because there are so many updates to the jet that it essentially became an entirely different business jet all together. However, it still has all of the same trusted qualities that people have come to expect from Bombardier, especially with regard to the 300. It only makes sense that they would handle things in this manner, largely because the 300 is one of the most trusted jets that the company has ever made. Therefore, it’s not surprising that they would use that particular jet as the foundation from which to build something that is more or less new and improved in every way. The thing that is surprising is that the company is selling the jet for exactly the same price as the 300, $27.6 million. For those who are interested in purchasing the jet for themselves, they won’t have to wait long. Bombardier plans on making it available early in 2022. By all accounts, it is on target to become one of the most popular jets that the company has ever designed.