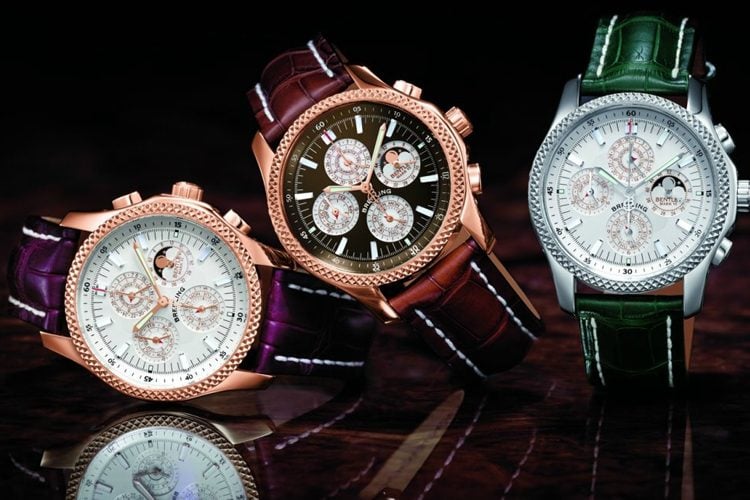 The Breitling watch company was founded in 1884 and quickly established themselves among the upper end of horological circles with their luxury timepieces which feature the best in quality, design and innovation. Not unlike their equals in the auto industry, the British based Bentley auto manufacturers, also known for maintaining the highest standards in luxury, innovation and top of the line models. Together, the prestigious leaders within their realms in the world of luxury watches and automobiles joined forces in 2002 to produce a Breitling for Bentley line of fine timepieces which accompanied the sale of several of their vehicles, sweetening the deal with a little something extra. One of the most exquisite collaborations between the two is the Breitling Mark VI Complications 29 which merits a closer inspection.

A union of equals

It’s rare that two companies form completely different industries make the decision to combine their talents in the creation of something as magnificent as the Breitling Mark VI Complications 29. This watch was produced in a men’s version between 2007 and 2010. You don’t have to buy a Bentley to own one however as there are a few of them still available. It’s worth noting that those which are in existence are a rare find because they are produced from a limited production run in reference numbers H29363 and L29363, according to this. Just as each Bentley produced in a unique and highly desired masterpiece, the same is true of every Breitling watch. The fact that Breitling and Bentley are from two distinct industries makes a comparison of their merits seem like comparing apples and oranges, but each has a strikingly strong reputation within the realm of luxury products, known to be favored by the royals, the rich and the famous.

Specifications of the Mark VI Complications 29

Current pricing: Between $25,000 and $144,000 with just 100 of the platinum version ever created and 250 of the rose gold variant. To truly understand the value of the special edition Mark VI Complications 29 made in honor of the Bentley Mark VI, we must take a look at the design, materials and intention behind this masterpiece. The Case is made of either18k platinum, or a red gold 750 material, both precious metals, with your choice of two dials, respectively a silver cloud design or a burnt oak, depending upon the case metal. This timepiece features a fixed bezel in materials which match the case with a screwdown type crown winding in both directions and a lug width of 22 mm. The diameter of the case measures 42 mm. This watch is water resistant to 100 meters. It is capped with a concave sapphire crystal with anti-glare coating on both sides of the glass. The strap is made of genuine crocodile leather or Barenia and it fastens to the wrist with a folding clasp.

This watch powered by a Breitling 29B, self-winding chronograph movement featuring a COSC certified chronometer. It beats at 28,800 A/h with 38 jewels and a power reserve of 48 hours. The complications are a chronograph and perpetual calendar which are expert miniaturizations of the mechanism including 13 hands for the perpetual calendar which also accounts for day of the week, the month, the season, moon phases, leap years and the date. the functions are hours, minutes and seconds with 1/4 seconds chronograph and 30 minute and 12 hours totalizers. All things combined to work in precision with one another, the Breitling Mark VI Complications 29 is among the cream of the crop in the Bentley-Breitling collaboration, which highlights and celebrates the innovations of each company, giving a nod to the true essence of quality and luxury in a masterpiece which is simply worn on the wrist with no explanation needed.

This is a model that is still available every now and then when it either gets placed on an auction site or is offered by a private collector. The watches in the line are so strictly limited that it makes them a rarity, which was the case from their first day of release with only 350 total ever made. The broad range in pricing is dependent upon the condition of each individual watch as we’ve seen them run anywhere from $25,000 on the low end of the spectrum to a whopping $144,000 on the high end. This isn’t a watch that you can just go out and buy at any price, unless you happen to find on that is up for sale on the second-hand market.

The Breitling Mark VI Complications 29 is among the most spectacular watches we’ve seen in some time. We love the story behind the model that unites two of the most recognizable and biggest luxury brands on the planet together in iconic collector’s pieces which are distributed throughout the world in extremely limited numbers. It was a big event when the two decided to form a partnership of sorts back in 2002, and by 2007 when the Mark VI Complications 29 was released, it became a part of a larger collection within the Breitling brand. There is a certain level of confidence about the quality and workmanship simply because of the brands involved and their impeccable track records for consistent delivery of quality and the accompanying prestige. Aside from the fact that the Mark VI Complications 29 is made to honor the Bentley vehicle, it’s named for, it can stand alone on the Breitling reputation as well as on it’s handsome aesthetics and obviously expensive construction. This is a complicated watch that reminds us of how a simple meeting of the minds can spark a fire that produces an item which extols excellence in every aspect of its creation, coming from the top minds and most skilled craftsmen in the business. It’s always a pleasure to review a true work of art, particularly when there is a richness along with meaningful symbolism reaching back to its origins.