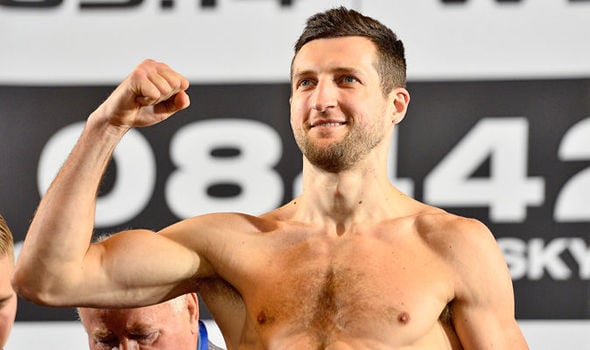 Carl Froch is a professional boxer from Nottingham, England and he went by the nickname “The Sheriff of Nottingham” in the boxing ring. He enjoyed a fourteen-year long career in the ring and was known for his toughness, able to take punches and deliver more to his opponents with intense aggression. He has an estimated net worth of $20 million but did all of this wealth come from his time in the ring? We looked into his impressive career and history to find out just how he came to be so rich and here is what we discovered.

Carl was born in Nottingham, England on July 2, 1977. He is just 42 years of age. He got an early start as a boxer, competing in the ring at the tender young age of just nine. During his early years in the sport, he won two ABA Middleweight boxing titles. He competed in the World Amateur Championships and won a Bronze medal in 2001. After taking the bronze, he went professional. What really caught everyone’s attention is that after he turned pro, he fought 33 bouts and out of this number he won an amazing 31 matches. Proof of his extremely aggressive style is that 22 out of the 31 wins were by knockout, showing that he packs a powerful punch.

In addition to being called the “sheriff of Nottingham,” he was also known as a member of the elite Boxer list known as “The Cobra.” His style was entertaining as well as bold. He could take a hard hit on the chin and keep going unphased, which made the crowds go wild. He was also somewhat of an entertainer in the ring, but his primary goal was to win fights, and his popularity came from the combination of his skills in the ring and his persona which offered, to a lesser degree than his boxing acumen, an element of showmanship.

Advancement of his career

Froch achieved status in the arena of professional boxing by earning a number of British title belts. He gained international recognition when he competed against Jean Pascal in 2008, and took the international title, keeping it for two more successful fights prior to suffering a loss to Mikkel Kessler and surrendering the belt. In a TKO. H has held WBC, BWB and IBF titles. Carl Froch is currently the WBA and IBF Super-middleweight champion, and on top of this, he has held the title of world champion four times throughout his career so far. He also holds the distinction of being the WBC super-middleweight champion twice. He .has established a reputation for being the tough boxer who comes in to destroy the winning streak that other boxers had been enjoying and Britain’s BBC has elevated him to the status of the country’s best boxer. He was named as the “Fighter of the Year” in 2012 by BoxRce and World Boxing News, making him somewhat of a celebrity.

How did Carl Froch amass a fortune of $20 million

When we discovered that Carl Froch had an estimated net worth of $20 million for 2018 and 2019, we wondered if he earned the entire sum through his boxing career or if he had made some wise investments in real estate or perhaps in the stock market. What we learned is that his focus has been on his boxing career and that the bulk of his fortune has been earned through the sport. When you take a closer look at his popularity and the impressive statistics that he has racked up for himself, it’s not hard to believe that he has made his millions fighting in the ring. He’s the best in Britain and arguably, one of the best professional boxers in the entire world, having earned several international titles in addition to taking his home country by storm. Froch is one of those athletes that is natural in his chosen profession and although he puts a great deal of effort into each match, he seems to have a feeling for what he is doing. If you’ve ever watched him in action, it’s obvious that he is a very good judge of his opponent and he can gauge how the other boxer is going to perform, seeming to know what he’s going to do in advance, and it is this ability to predict the moves of his opponent that gives him an edge in the ring. He’s one that is tough to defeat and there aren’t many who have.

Carl Froch is Great Britain’s phenomenal boxer who has been in the sport since he was just a pre-adolescent youth. He’s had years to build his skills and he’s maintained a sharp focus on the sport, developing his skill and talents for decades. Now at a still young age, he’s arisen to celebrity status. He’s earned a decent living through boxing and he’s been wise with his earnings, building a net worth of $20 million throughout the years. He’s still going strong and if he maintains his current trajectory, the figure is likely to increase over time. We’ve not heard anything about his future plans or if he has a retirement goal, as professional boxers take a pounding throughout the years and it’s a sport that is physically demanding and a bit hard on the body. Currently, Carl is sitting on top of the world and when he does decide to hang up the gloves, he certainly won’t need to worry about earning a living because he’s already set himself up on the financial end of things.