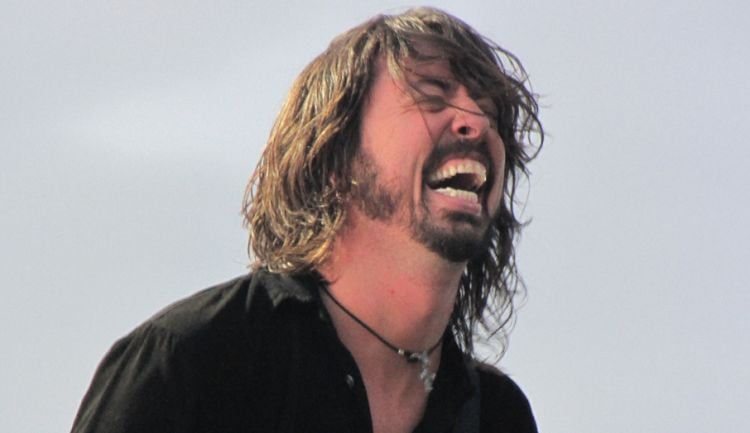 Dave Grohl has amassed a huge fan base as a talented musician with the band Foo Fighters. Grohl has also earned a lot of money from his career in the music industry. His estimated net worth is valued at $280 million. Did he make all of this money from music? We looked into Dave’s interesting past and here is what we found.

Dave Grohl began his music career when he was just a kid. He grew up in the Washington D.C. area. He was a self-taught guitarist who was inspired by the punk rock music shows he attended with his cousin. When he was in high school, he joined several local bands and played guitar as well as learning how to play the drums. When he became more experienced, he was hired as the drummer for the band “Scream” at the age of 17. He was with the group for four years and when they disbanded he followed up on a new lead.

Grohl auditioned with the new and upcoming band out of Seattle called Nirvana. The group achieved tremendous success as one of the pioneering groups on the Seattle Grunge scene. The group was one of the most influential bands at the time and when Kurt Cobain died, the group came to an end. Grohl was deeply affected by Kurt’s death and buried himself in his music to deal with the pain. He recorded tracks, playing most of the instruments himself and made cassette copies and gave them to his friends for free. One of the tapes made its way to Capital Records executives and they signed him immediately. They initially believed that a full band had laid down the tracks. Grohl formed the group the Foo Fighters who would also go on to achieve astronomical success.

Dave Grohl also made several guest appearances for Tom Petty and the Heartbreakers and Pearl Jam. He was an artist who was in high demand. He’s one of those guys that everyone likes to work with because he’s extremely talented and he’s also known as a great guy. He also worked on several projects with other artists incluing Queens of the Stone Age, Paul McCartney, David Bowie, Killing Joke, Nine Inch Nails and Tenacious D.

Grohl released seven studio albums along with his group Foo Fighters. The album sales were high into the tens of millions of copies worldwide. This brought in a large part of Grohl’s current fortune. Dave got rich and so did the record company and everyone else associated with him. He’s just one of those mega talents that can make it easily just by being himself.

Dave completed the Broken Leg Tour in 2016. He’s always working on something new and he’s been involved in a project with the producer of “Nevermind” Butch Vig. His mother wrote a book that talks about what it’s like to have a son for a rock star. Grohl, along with the Foo Fighters have received multiple Grammy nominations and out of the sixteen noms, they took home nine as awards. He joined his former band mate Novoselic when the two were inducted into the Rock and Roll Hall of Fame. This honor was bestowed upon them in 2014, along with their deceased band leader Kurt Cobain, posthumously. Foo Fighters also received awards for Best Rock Performance as well as Best Rock Song categories at the Grammys. They’ve enjoyed a long and prosperous run in the music industry.

There is little doubt that music has been good to Dave Grohl, but he’s been good to the industry as well. He’s known as one of the richest rock and rollers in the nation today. His entire $260 million fortune was made through his career in the music business. Even though he’s very wealthy, Grohl hasn’t let any of the fame or wealth go to his head. He’s known as one of the most likable and down to earth musicians in the business. He’s still active in the music business and we don’t think that he’s going to be leaving the business any time soon. We’re looking forward to more inspired tunes from Dave Grohl in the near future.