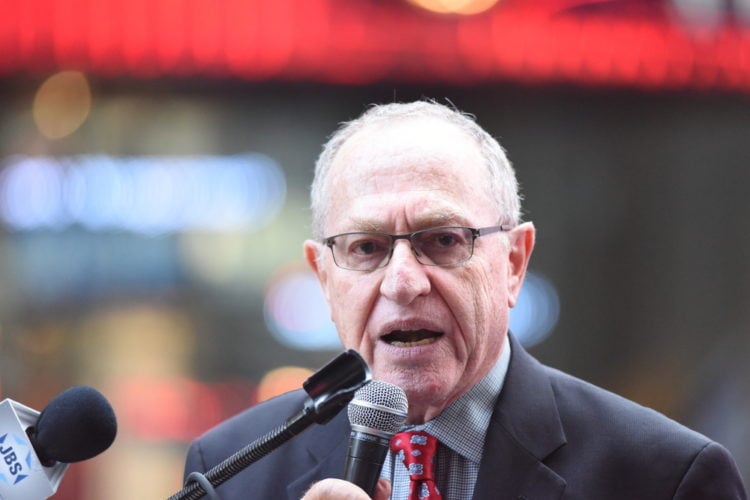 Alan Dershowitz is an American lawyer who specializes in U.S. constitutional law and American criminal law. He is known for representing many high-profile figures and for his views. His career in law began in the 1960s, so his legal career spans seven decades. During that time, Dershowitz has become a wealthy man. It is estimated that Alan Dershowitz’s net worth is $25 million, and here is how he accrued his wealth.

Alan Dershowitz was born on September 1, 1938, in Williamsburg, Brooklyn, and was raised by Jewish parents. Dershowitz attended Yeshiva University High School, where he was a rebellious student who showed talent at sports. At the age of 14, Dershowitz got his first part-time job working in a deli factory. After graduating high school, he attended Brooklyn College and received his A.B., majoring in Political Science. He then attended Yale Law School and graduated with a Bachelor of Laws in 1962. During his time at university, he was the editor-in-chief of the Yale Law Journal.

Dershowitz’s first job after graduating from law school was working as a clerk for David L. Bazelon, who was the chief judge of the U.S. Court of Appeals for the District of Columbia Circuit. He then clerked for the Justice Arthur Goldberg of the U.S. Supreme Court between 1963 and 1964. In 1964, Dershowitz became an assistant professor at Harvard Law School and was promoted to a full professor in 1967. At that time, he was just 28, and it made him the youngest full professor of law in the history of the school. In 1993, he was appointed as the university’s Felix Frankfurter professor of law. He retired from his teaching career in 2013. However, he remained a Distinguished Senior Fellow at the Gatestone Institute.

Throughout his career as a professor at Harvard Law School, Dershowitz also maintained his own legal practice, which undertook work in the fields of both civil and criminal law. During his career, Dershowitz has become one of the most high-profile lawyers due to his work representing people who attract media attention. His first high-profile case was representing Harry Reams in 1976. Dershowitz successfully appealed against Reams’s conviction for distributing obscenity. Dershowitz returned to the limelight in 1984 during the Claus von Bulow case. Dershowitz appealed the British socialite’s conviction for the attempted murder of his wife and successfully overturned the conviction. Not only did Dershowitz write a book about the case, but the book was later turned into a movie.

In 1989, Dershowitz attracted attention for the third time due to his involvement in a defamation case against Jozef Glemp. Dershowitz filed the suit on behalf of Rabbi Avi Weiss. He references the case in his 1991 book ‘Chutzpah.’ In 1990, Dershowitz sued reporter Mike Barnacle over him, saying that Dershowitz had made racist remarks about Asian women. Possibly one of Dershowitz’s most high-profile cases was that of O.J. Simpson in 1995. He was an advisor to Simpson’s defense team throughout the murder case. Although the trial was the most publicized in American history, Dershowitz said it ranked in the middle in terms of important cases in which he was involved during his career.

The next case in which Dershowitz was involved that attracted a lot of media attention was that of Jeffrey Epstein in 2008. Dershowitz was on the defense team during the investigation into allegations that Epstein solicited sex from minors. The case concluded with a non-prosecution agreement. However, Epstein later received an 18-month prison sentence after pleading guilty to a state charge of procuring for prostitution with someone under 18 years of age. Dershowitz was a consultant to the legal team during the 2011 Julian Assange case, which was part of the WikiLeaks scandal. He was also a consultant for Harvey Weinstein’s team in the 2018 investigation into sexual abuse allegations. Most recently, Dershowitz was part of the legal defense team for the 2020 case against 45th President Donald Trump. They defended him against impeachment charges. The media paid a lot of attention to Dershowitz’s involvement in the case, as he had openly supported Hilary Clinton.

Although Dershowitz is known for his academic writing, he has also written two fictional works. He wrote his first fictional work, ‘The Advocate’s Devil,’ in 1994. In 1999, he published ‘Just Revenge,’ his second and final fictional book.

According to Celebrity Net Worth, Alan Dershowitz’s net worth is $25 million. He has predominantly made his money as a lawyer specializing in U.S. constitutional law and American criminal law and has become notable for representing many high-profile people throughout his career. Dershowitz has also made money through academic writing and teaching law. In addition to his academic writing, Dershowitz has also made money from writing fictional works.

Alan Dershowitz has been married twice and has three children. He met his first wife, Sue Barlach, while they were still at high school. The couple married in 1959, and they went on to have two sons together. Their eldest son, Elon, is a film producer, while their younger son Jamin, is an attorney. Dershowitz and Barlach separated in 1973 and divorced two years later. Barlach drowned in an apparent suicide on New Year’s Eve, 1983. In 1986, Dershowitz married Carolyn Cohen, a retired neuropsychologist. Their daughter, Ella, was born in 1990, and she is now an actress. The family has homes in Manhattan, Miami Beach, and Martha’s Vineyard, and they divide their time between these three locations.