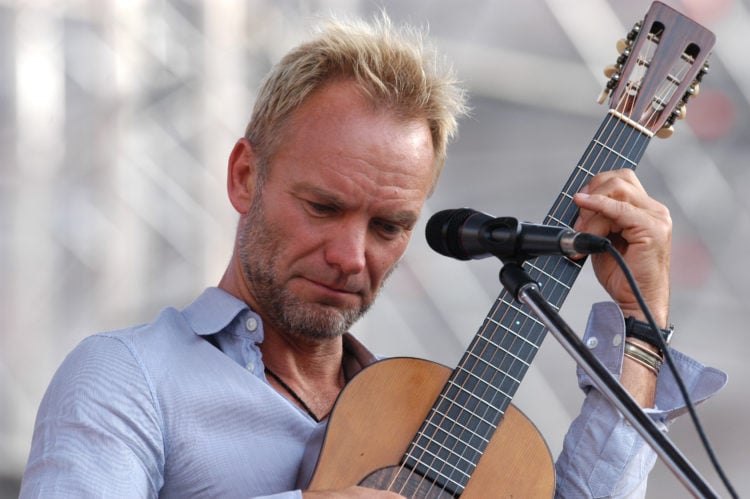 Sting is one of the most successful British musicians of all-time, and he has also enjoyed a career as an actor. He is best known as being a member of the new wave rock band ‘The Police’, and he was the lead singer, principal songwriter, and bassist for this group. This musician has also had a successful solo career. Due to his phenomenal success, it is estimated that Sting now has a personal net worth of $400 million. Here is a look at how he achieved this.

Born as Gordon Matthew Thomas Sumner in Northumberland, England, on October 2, 1951, Sting is the oldest of four children. His love of music began when he was 10 when his father’s friend emigrated and left him a Spanish guitar. Although he attended the University of Warwick, Sting decided to leave after just one term as a life of academia was not for him. He had several jobs before he eventually qualified as a teacher and spent two years teaching at St Paul’s First School in Cramlington. At the same time, the musician would perform at clubs in the evenings and at the weekends. It was at this time that he earned the nickname ‘Sting’, which is now the stage name by which he is best-known. He would play jazz wearing a yellow and black striped top, and the other musicians likened him to a bee or a wasp.

When Sting moved to London in 1977, he formed ‘The Police’ with Stewart Copeland and Henry Padovani. However, Padovani was later replaced by Andy Summers. The group was initially together from 1978 to 1983. During that time, they had five albums that topped the UK charts. They also won multiple awards, including two Brit Awards and six Grammy Awards. Although the group did not officially split, Sting decided in 1983 that he wanted to try his hand as a solo artist. The group did not reunite until 2007 when they opened the Grammy Awards.

During the unofficial split from ‘The Police’, Sting embarked on a very successful solo career. His debut solo album ‘The Dream of the Blue Turtles’ was released in 1985, and it had become Triple Platinum within a year and was nominated for multiple awards.

In the early stages of his solo career, Sting collaborated with many other popular and successful musicians, including Phil Collins and Miles Davis. He was also one of the artists featured on the Band-Aid charity Christmas single ‘Do They Know It’s Christmas?’. His second studio album ‘…Nothing Like the Sun’ was released in 1987, and he went on to release a further four studio albums during the 1990s. Sting took a four-year break from the studio before returning in 2003 to make his seventh album ‘Sacred Love’. A further two solo albums were released in the 2000s.

Over the last decade, Sting has continued to record and release music. His 2010 album ‘Symphonicities’ including both new material and new renditions of material he had previously released. Three years later, he released ‘The Last Ship’, followed by ‘57th & 9th’ in 2013. In 2018, Sting collaborated with Shaggy on an album titled ‘44/876’. Most recently, Sting released his 13th solo album in 2019, titled ‘My Songs’. Although the album contains fresh material, there are also new renditions of previously released material. He has not disclosed whether he intends to continue writing and recording music in the future or announced any future releases.

Sting gained some acting experience in the late 1970s when he appeared in the music videos or ‘Police’. His first acting role aside from this was in 1979 when he played Ace Face in ‘Quadrophenia’ and then Just Like Eddie in ‘Radio On’ in the same year. Two years later, he played Helith in ‘Artemis 81, a TV movie. He has since had multiple acting roles and has appeared as himself in many movies. Furthermore, he has contributed to film soundtracks and has provided voices for both television and film characters. According to IMDb, his most recent role was in ‘Kaamelott- Premier Volet’, which is currently in post-production.

According to Celebrity Net Worth, Sting has an estimated net worth of $400 million. He has predominantly made this money through his work in the music industry, both with ‘Police’ and as a solo artist. However, he has also made some of his fortunes through his acting career.

In his personal life, Sting has been married twice and he has six children. His first wife was actress Frances Tomley, to whom he was married from 1976 to 1984. They had a son, Joseph, and a daughter, Fuchsia Katherine, together. He married Trudie Styler, an actress and film producer, in 1992 and they have four children together. Daughter Brigitte Michael, known as Mickey, was born in 1984, followed by their elder son Jake in 1985. In 1990, their second daughter, Eliot Pauline who is known as Coco, was born. Finally, their younger son Giacomo Luke was born in 1995. Sting has multiple properties around the world, and he splits his time between these properties. Four of his homes are in England, as he has two London properties, a cottage in the Lake District, and Lake House, which is set in a 60-acre estate in Wiltshire. His other homes include a beach house in Malibu, an apartment in New York, and the Villa Il Palagio estate in Tuscany.