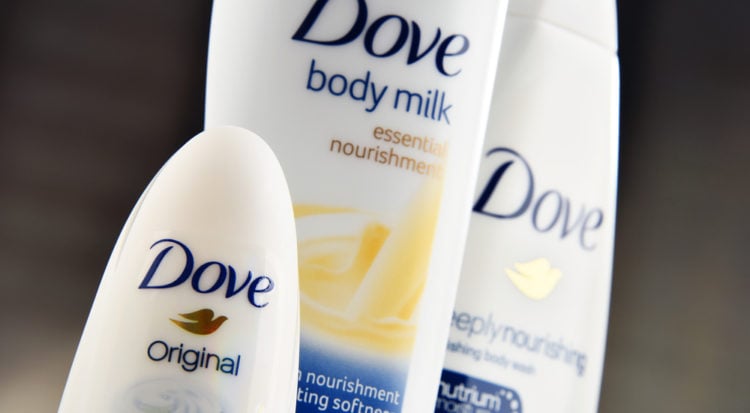 There are very few personal care brands that are as popular as Dove is. Introduced in 1957, Dove has become a global presence in the industry with its products sold in more than 150 countries. The brand offers personal care for the whole family—women, men, and even babies. The company is known for its gentle image, which is largely assisted by its logo. The Dove name and logo is a symbol of peace and goodwill, after all. We’re going to take a close look into the history and story behind the logo, but first let’s talk about the story behind the company.

Dove’s history starts out with the creation of soap. In fact, no other personal care brand today produces soap as much as Dove does, and the company name has been tied in with soap-making from the very beginning. When it was founded in 1957, Dove started out as a soap company that was unlike all the other of its time. Surely, there were toiletry brands that were much older and much more established than Dove, but the younger company managed to stand out from the rest with one simple characteristic: moisture.

Dove quickly stood out from its competitors by producing soap that didn’t dry out skin but rather moisturized it. It was clear from the beginning that Dove was dedicated to creating high quality products for its consumers. Soon enough, Dove became known as a company that can be trusted when it came to personal care. Dove expanded gradually, building its catalog a little at a time to add more products to its personal care line. Today, Dove sells hair care products in addition to skin care, bathing, and antiperspirant/deodorant product.

In 2004, Dove launched their Real Beauty Campaign, which supported the brand’s ideal of embracing the natural body. They were one of the first global companies that embraced the idea of body positivity, and promoted self-care and self-love ideals above what was accepted as social norms. Dove seemed to have been always ahead of the curve, and even the brand’s marketing has continued to prove this time and again. Over the years, Dove’s packaging began to reflect its logo images—evoking simplicity, elegance, and gentleness. Over time, the Dove brand became easier to recognize, and it is now undoubtedly difficult to miss in the supermarket aisle full of other personal care products.

According to this article and as mentioned earlier, Dove’s visual identity has always been that of tenderness and elegance. This can easily be seen from the brand’s logotype, which has a calligraphic style and a slight italic. All of these nuances add to the gentle feel and appeal of the logo. They also somehow convey the message that the company cares for its products and for its consumers. Since its founding in the 50s, the brand has changed 4 times and additional logo interpretations have been created specifically for the brand’s extended personal care lines (e.g. the Men’s line).

The very first logo appeared only on Dove’s singular product: their soaps. The logo was simple. It featured a calming background of blue and a white cursive lettering that spelled out the company name. This lettering is very much representative of writing styles from that time. The main logotype also had a tagline: Bath and Toilet Bar. The upper right corner of the entire logo is colored in gold, and this gold portion contained Dove’s iconic emblem—its namesake bird. The original Dove logo bird is white; it faces the left and has a large stylized wing. This logo would be the main logo for the company for roughly 15 years.

The company saw its first logo change in 1969. The blue background disappeared; instead a simple white or essentially a transparent PNG background replaced it. The wordmark was also updated into a more modern font—bolder and spaced closer to each other. The logotype became blue, and the gold background disappeared. Instead, the white dove became a gold dove. This time, the dove is featured with a simpler design. Still fluid and sophisticated, the dove is now facing the right, a suggestion of forward movement. This represents Dove’s dedication to quality and innovation.

It took 35 years before the company changed their logo again. In truth, it took that long mostly because Dove really didn’t need much of a change. Even though that’s a huge gap in years, the 1969 model has proven to be a timeless logo—proof yet again of Dove being ahead of its time. The 2004 logo featured most of the same characteristics with just slight changes. The typeface changed to a slender and much simpler font. It also used a darker blue color compared to the 1969 logo. The dove emblem featured the most change. The color is now a more rose gold tone, and the shape of the dove became even more elegant. It no longer featured an eye, but it did feature a new sheen that was never there before. The dove is also now located underneath the logotype instead of above.

The latest 2012 Dove logo is a mere updated version of the 2004 logo. It has pretty much the same features. The positioning of the logotype and the bird emblem remains the same. The Dove wordmark is even more modern and simple, and the color is just slightly lighter. The dove emblem is now completely gold with a milder sheen on its middle part. The dove bird also seems to be just a little more elongated, signifying even more elegance. The 2012 logo continues to be Dove’s logo to this day.