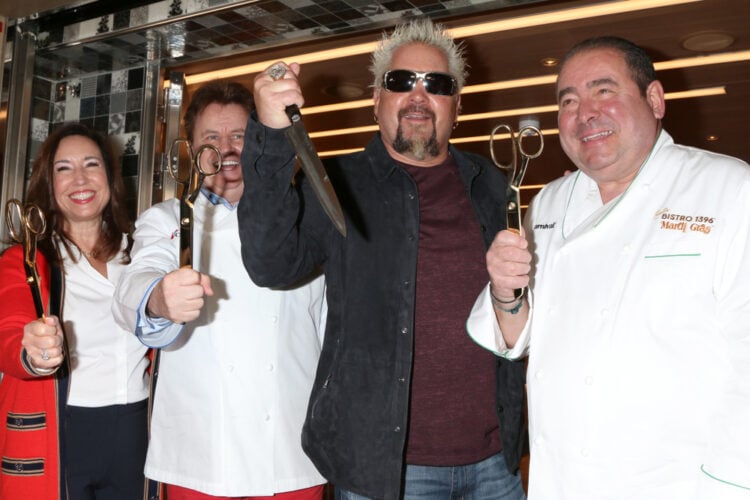 Emeril Lagasse’s net worth is $70 million, making him one of the richest chefs in the US. He used his passion for cooking to build his empire, although the COVID-19 pandemic was not kind to him. He had to shut down some of his restaurants and when he sold his brand, he also gave up a chance to see it grow immensely. All the same, he uses the most of what he has now, and as business gets back to normal, Lagasse’s wealth is likely to increase. In the meantime, learn about how he achieved a net worth of $70 million here.

Giving Up Music to Cook

Lagasse was born to a Portuguese mother and a French-Canadian father who raised him in Fall River, Massachusetts. His mother’s cooking skills inspired his passion for food, while the Portuguese roots resulted in the family valuing dinner time. As neighbors ate their food enjoying some television, Lagasse learned that meals should always be at the family table. According to Dalstrong, when Lagasse was seven, he begged his mother to teach him how to cook vegetable soup. However, it took him another three years before he could finally start taking his interest in cooking seriously. Therefore, as a teenager, the chef sought some work in a Portuguese bakery to master the art of pastry and bread baking. Still, the little boy was confused about which career path to take. As much as he loved cooking, Lagasse had a natural talent for music.

He taught himself how to play most wind instruments and the drum, but enjoyed playing percussion more. He also wrote music and played different genres of music, including jazz, classical, and rock and roll. His love for music also led him to start a band while in high school, and they even toured Canada and northern parts of the US. The time to decide whether to pursue music or cooking came and Lagasse settled on cooking which was quite disappointing to his parents. Perhaps they wondered why their son had turned down a full scholarship to the New England Conservatory of Music. Lagasse instead went to Johnson and Wales University in Providence, Rhode Island. Upon graduation, he traveled to Europe, where he acquired more culinary skills. Most importantly, as he told Collections Canada, Lagasse learned that it was his passion that would elevate him to wherever he wanted to go. Consequently, there was no looking back.

Going to Wherever Opportunity Calls

After returning to the US, Lagasse practiced in New York, and one of the places he fondly remembers is Dunphy Hotels, now Omni. He could not afford to live in New York, therefore, rented an apartment in Queens and used the train to commute. While working in Dunphy Hotels, Lagasse met Wolfgang Puck whom he recalled as being the first influence on a serious basis. Lagasse then interviewed for a job at Commander’s Palace to work with the renowned Brennan Family. According to Eater, Paul Prudhomme was the chef at the restaurant, but he wanted to open his own place with his wife. As a result, the Brennan family was looking for someone to fill in Prudhomme’s slot and Lagasse got the job after a rigorous vetting process. He moved to New Orleans to take over Commander’s Palace as the new chef, and soon, his responsibilities increased when he became the general manager. The chef said that it took him about eight months to take the restaurant to the level the Brennan family had a reputation for, and during this time, Lagasse fell in love with New Orleans. He lived in the Warehouse District across a blown-out space inhabited by homeless people. Two of his customers at Commander’s Palace told him the area would be great for a restaurant, and Lagasse considered it. Therefore, even when Ellen Brennan invited Lagasse to open a restaurant with her in the French Quarter, he declined. He disclosed to Broward Palm Beach that he turned down an offer for one of the top ten chef jobs in America to start building his dream of owning a restaurant without money.

It was challenging to get funding for renovating the restaurant because those associated with the Brennan family did not want to help Lagasse, who at the time seemed like a rival. Therefore, he borrowed money from The Whitney Bank and opened Emeril’s in Warehouse District in 1990. He then decided to open NOLA in the heart of the French Quarter in 1992. Lagasse became an entrepreneur and started seeking opportunities. He noticed that Las Vegas was a great place to establish a fish house and while others discouraged him, he was determined. It was risky taking Louisiana roots to the desert but the venture proved worthwhile. Lagasse said he was content with having two restaurants within a traveling distance of each other; the Las Vegas fish house was only taking advantage of an opportunity.

Being in Las Vegas was the beginning of abundant blessings because he got the chance to be on a pilot episode of a new food channel. It must have been good since it attracted the President of The Food Network, who wanted to give Lagasse another opportunity to be on television. Unfortunately, the gig did not last long owing to Lagasse being overqualified, but the President of The Food Network offered him another chance to start his show, “Essence of Emeril.” Then came “Emeril Live” and by then, money was flowing. Reportedly, a chef earns around $50,000, but when Lagasse had his show, the pay was much more. Besides, as a businessman with over 20 restaurants, Lagasse was making a killing with his business. Additionally, he ventured into writing cookbooks, and so far, has 18 of them, which of course, helped to push his network further upwards. However, according to Republic World, most of his wealth could be from selling his brand to Martha Stewart for $50 million.