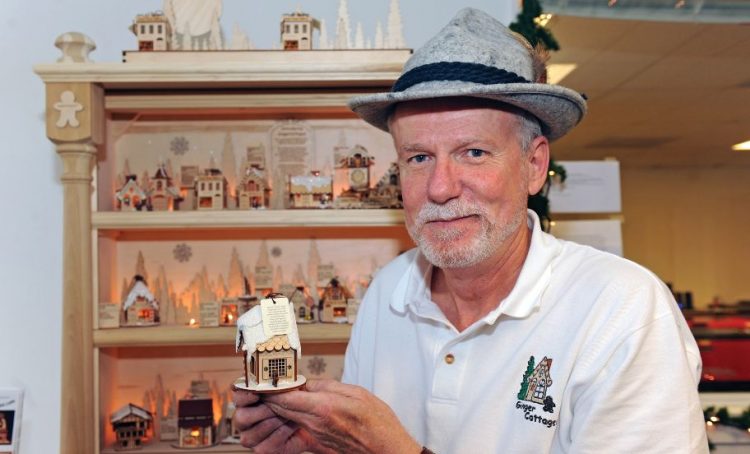 Nutcrackers? Who’d ever think that anyone could become a millionaire by making nutcrackers? Well, as they say, necessity is the mother of invention and a man named Glenn Crider took his hobby of creating Christmas nutcrackers and turned it into a million dollar business. And, not only did it become amazingly lucrative, but his nutcrackers became famous in the process.

For many years, Glenn had been making a few nutcrackers and other similar knick-knacks here and there, but mostly only as a hobby. He sold his nutcrackers at craft fairs near his home in Richmond, Virginia, especially around the holidays. His day job was as an IT specialist and he had been doing that for the same company for just about 30 years. It was that full-time job that paid the bills; but in 2009, he was laid off at the age of 54. Finding another job at that age can be nearly impossible, so Glenn decided to make nutcrackers his full-time job rather than just a hobby.

And, that was a very good decision. The dark times of 2009 were over and the best was yet to come. In fact, during one single year, Glenn had become not only unemployed but also what appeared to be unemployable, built a lucrative business, and had the unique opportunity of seeing his nutcrackers on display at the Smithsonian.

Glenn came from a family of tobacco farmers, but then when his mom and dad were in their thirties, they moved away from those tobacco fields and took their family to Richmond. His father worked at Dupont and the family was fairly poor, so Christmas was a DIY occasion where Glenn learned to make things. During the summer months, he would make little things to sell at yard sales as well, but none of them were too successful.

With a mechanical engineering associate’s degree under his belt, in 1975 Glenn became the dairy and frozen food manager at a local supermarket chain. When his grandmother passed away, she left him an antique clock, but it was broken. So, Glenn needed to repair it himself and a local jeweler let him apprentice with him every Tuesday. That’s when Glenn learned clock and watch repair.

The grocery business required some really long hours and Glenn was in the process of starting a young family, so he started going to night school and studying computers. As a result of that learning, he got a better job as a data analyst/software developer for a food brokerage. He still loved working with his hands, however, so he began to make little wooden circus-oriented toys in a backyard shed. He crafted tiny trains filled with bobble-head animals and other toys like unicycle riders dancing on a circus tightwire. Glenn and wife, Diana, started selling the wooden toys at craft fairs but not very successfully.

Had it not been for one customer, Glenn might never have started making nutcrackers. The woman saw a tiny toy soldier that Glenn had made at a craft fair and asked if he could make her a tiny nutcracker for her dollhouse. So, Glenn did as she requested and then he started looking into the history of nutcrackers.

They actually got their start in eastern Germany hundreds of years ago. At the time, folks had to turn to something like wood carving to make up for the fact that the local mines were no longer producing. Glenn used a German catalog to choose some images of German nutcrackers to start crafting his own. He started with little four-inch nutcrackers using a watchmaker’s lathe.

At the next craft fair, the circus animals still didn’t sell, but his new nutcrackers all sold in a single day. Glenn’s customers were buying them up quickly for hanging on their Christmas trees and to put on wreaths. He was selling them for ten dollars each. Then, one day Glenn realized that larger nutcrackers would require the same amount of work as little tiny ones and he could ask more money for them. The bigger nutcrackers imported from Germany were selling for $200, so he built bigger ones and sold them for $100 each.

At that time, 70-hour work weeks became the norm for Glenn. For almost 20 years, he had to split his time between building his nutcrackers and working his IT job. Glenn and Diana took their nutcrackers to the two biggest craft shows in Virginia every December. They were the Richmond Christmas Market and the Bizarre Bazaar; and for just a few weekends of selling nutcrackers, they made $30,000. Glenn’s corporation, TRC, was incorporated in 2000 and he moved the company from the backyard shed to the garage. At that point, Glenn and Diana were just thinking of the nutcracker business as a little something for their retirement. Little did they know that it would soon become their only source of income.

Then 2006 brought the Postal Service to Glenn’s door, online anyway, and they wanted to take photos of his nutcrackers for their holiday postage stamps. Glenn agreed and delivered both artistic renderings and fabric and fake fur swatches to them to be used on the nutcrackers for beards, clothes, and hair. They went back and forth a bit and then, following design approvals, Glenn crafted the nutcrackers and sent them off to Washington. In 2008, 1.46 billion postage stamps featuring Glenn’s nutcrackers were sold to the public and the originals were put on display in the Smithsonian museum. Glenn was no longer a broke unemployed IT guy, but an artist with his work in the Smithsonian.

Glenn and Diana expanded their business and added gingerbread houses to the nutcracker line with the Ginger Cottage Line. TRC’s products are all about creating special Christmas memories and today, they supply a number of local shops as well as national restaurant chain, Cracker Barrel, who placed a whopping TRC products order that filled four trailer-trucks. So, Glenn moved TRC out of his garage and into a new facility with lots of new equipment for producing much larger volume; so much volume that Glenn became a millionaire. It didn’t happen overnight, but the fact is that it did happen. And, all it took was a few nutcrackers and lots of imagination.