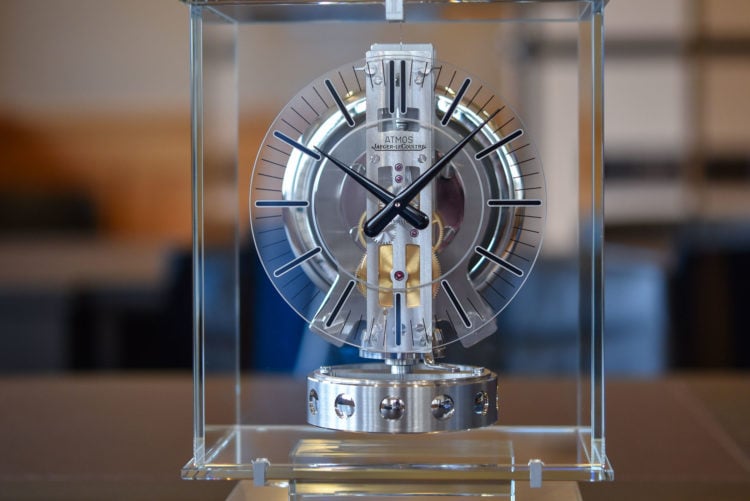 Clocks are sometimes simple in design, but some of them are remarkably complicated. The Atmos Clock is a unique invention in time-keeping that can have a mesmerizing effect on the casual observer. The original Atmos clock was designed in 1928 by Jean Leon Reutter in Neuchatel, Switzerland. Jaeger-LeCoultre took over the production of the clock in July of 1935. Their new model was the second rendition of the timepiece. The new owners decided to develop a second design for the clock. It worked differently than the original. How does the Jaeger LeCoultre Atmos clock function? Here is a simplified explanation of the complex operation of the famous clock.

The History of the Atmos Clock

The first Atmos clock was called the Atmos 0. The design was configured to work the mechanism on only temperature changes. It was driven by an in-glass mercury expansion device. The first commercially manufactured model was called the Atmos 1. It added ammonia bellows to the mercury device as its source of power. When Jaeger-LeCoultre took over the clock’s production, it introduced an ethyl chloride source of power according to Wikipedia. This was the next generation of the Atmos clock and it was named the Atmos 2. This showed the progression in technology. It also served to distinguish the timepiece from its predecessors. Although the model was announced in January of 1936m it took three more years for the clock to be available for purchase with the first sale date taking place in the middle of the year 1939.

How many Atmos clocks have been made?

The Jaeger Le-Coultre Atmos clock is a rare timepiece. There have only been 500,000 examples of the Atmos clock produced. It’s not difficult to find an Atmos clock to purchase, but the cost is generally expensive. Let’s take a closer look at how the Jaeger-LeCoultre Atmos clock operates: The Atmos clock is composed of ten main components, according to Atmos Adam.com. The Atmos is comprised of an expansion chamber, brass cover, a spiral spring or counterweight, a chain, mainspring, pulley, small spring balance wheel, Elinver wire, and an escapement. This is a temperature-driven clock that relies on a rise in the temperature to cause the gas to expand. The chamber then stretches against the counterweight/spring. When the temperature drops, the pressure that has built up is released. This causes the expansion chamber to contract. The contraction of the chamber causes slack in the spring counterweight.

A most unique example

What makes the Atmos clock unique, setting it apart from other timepieces is the innovative power source. It requires temperature variations to generate the energy that is necessary to run the clock. So long as the sun is shining, the balance continues to oscillate. It builds up pressure in the spring during warmer parts of the day. The Atmos clock does not stop running when the sun goes down, however. When the temperature falls and the expansion chamber contracts, the slack in the spring creates a motion that is small but it is enough to wind up the Atmos and continue its ability to keep time accurately. The process is the equivalent of winding a watch.

The glass housing of the Jaeger-LeCoultre Atmos makes it a most attractive addition to any decor. When you look at a drawing of the components and the explanation of how it works, working knowledge of clock components and how they work is helpful to fully understand the entire process. It was considered to be quite innovative in its day. Jaeger-LeCoultre offers a more detailed explanation of the inner workings of the Atmos. Behind the movement is an airtight capsule which is also the expansion chamber. It is filled with a blend of gases including ethyl chloride C2H5CI. The process of expansion and contractions are like an accordion gusset as the temperatures change. the size of the capsule changes in size growing larger and smaller with each fluctuation. It’s important to note that the system that operates the clock is extremely sensitive to temperature changes. Even a change of just one degree Celcius is enough to generate enough power for the clock to run for two days. It is a constant winding process that keeps the clock filled with a generous supply of power. This was one of the most creative innovations of its day, however, there is one caveat. The clock must remain stable to operate. It cannot be exposed to any friction or it will interfere with the processes that generate the power to keep accurate time.

The differences between the Atmos and a standard clock

The beauty of the Atmos clock does not simply lie within its lovely exposed timekeeping mechanisms, although noteworthy. It’s more in the brilliance of the design of the mechanism. Yes, you can watch this device and observe the meticulous operations which are visible through the clear case that houses the clock but there is much more to it. The gusset expands then contracts with such a slow movement that it can barely be perceived unless you’re still and study it intently. The balance wheel turns far slower than a standard clock. It is sixty times slower making one oscillation each minute. The Atmos clock’s mechanism turns 14,400 times less than the average wristwatch. It’s a low-energy consuming clock. It would take 60 million of them to use the energy that is consumed by a light bulb of 15 watts. Each Atmos clock is tuned to perfection without the need to oil it and it can continue to function for more than a thousand years without maintenance.

The Atmos clock is an example of timekeeping innovations from early in the 20th century. It is a sensitive device that must remain stationary to operate. It easily becomes the focal point of any room. Jaeger-LeCoultre is the manufacturer of this unique timepiece. It gives us a glimpse of what timekeeping was like nearly a century ago. 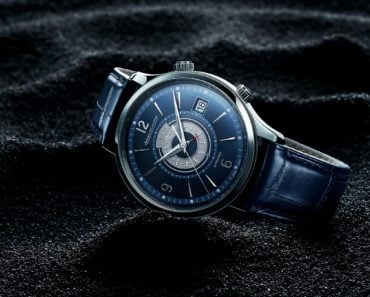