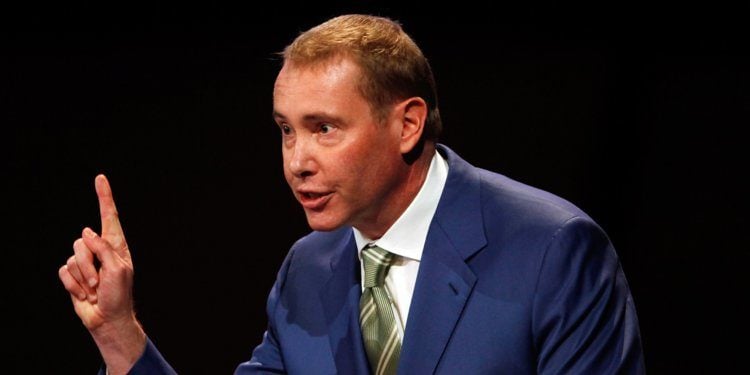 Jeffrey Gundlach is one of the most prominent names in the bonds business. He’s made a fortune in investments and he seems to have a special sense about when to act and when to hold. Being at the top of this volatile business game takes knowledge and skill, and a certain kind of daring, which he possesses perhaps more than the average person. We were interested in learning more about this fascinating and successful businessman, to understand more about what makes him so good at what he does, and who he is as a human being. Here are 20 things that you probably didn’t know about him, that you might just find interesting.

When we looked into his early life, we discovered that Jeffrey Gundlach was raised in the lower-middle-class section of Buffalo, New York. This is where he grew up, and he wasn’t surrounded by the rich and famous. That would come later in his life. His father was a chemist who worked for local business and his earnings weren’t that much. When the family’s clothes dryer went out of commission, they weren’t able to get it fixed right away. His mother had to be creative so she stretched a clothesline out in the back yard and hung the freshly washed laundry out to dry in the air, using nature’s clothes dryer instead of the luxury of an electric dryer.

2. Gundlach got his resourcefulness from his mother

We’re fairly safe in assuming that Jeffrey learned to be resourceful from his mom, from the story he told about the backyard clothesline. She did what she had to in order to make things work on a limited budget. Jeffrey was no different. He didn’t have the advantage that wealthy kids had when it came to getting an education or getting a start in the business world, but it’s clear that he used the available resources he could find and he pulled himself up by the bootstraps to become a major success in the business world.

When Jeff was in high school, he maintained high grades. He had plans for his life and he knew that getting a good education was going to be important, especially if he wanted to be accepted at some of the better institutions of higher learning. He worked hard and applied himself, and in the end, it paid off. His SAT scores were nearly perfect, and this is no small feat.

4. He graduated from an Ivy League school

5. Rock and roll got in the way of his education

We also learned that Gundlach enrolled in a Ph.D. program at Yale University, yet another Ivy League school. He was accepted into the program but he got sidetracked along with way. Although focused on his career and ambitions to become an entrepreneur, he discovered a passion for music along with way. He formed a band with a friend and moved to Los Angeles to pursue the music for a while, but this didn’t last, and he returned to his original plans to become one of the best bond traders in the business.

6. He worked for a multi-billion dollar firm

Jeffrey had the credentials to qualify for a high ranking job in the investments industry. He had the know-how and the drive and when he applied for the TCW investment firm, he was accepted. They put him in charge of the company’s $9.3 billion Total Return Bond Fund. He excelled at his work and delivered spectacular results for the company.

7. He got fired from his job

We’re not certain what the circumstances were, but we learned that TCW fired Jeffrey from his post with the company. We do know that it’s a cutthroat business, and we also discovered that a court battle ensued after his departure. Dealing in investments and finance can be a nasty business, but Gundlach was up for the challenge.

8. Gundlach can turn a bad situation into a winning deal for himself

When Jeff was fired from TCW, he didn’t just sit around moping about it. Instead, he went out and formed his own investment firm. He founded DoubleLine Capital LP. In a friendly gesture towards his former employer, he took the liberty of taking 14 of their senior staff members with him, so it didn’t work out as well for them as it did for him. He has an amazing ability to turn a bad situation into a much better one. This goes back to the fact that he’s a resourceful guy.

9. He married a member of his band

Jeffrey Gundlach and his partner advertised for a bassist for their band. Little did he know that it would change his life profoundly. The job was given to a musician named Nancy Draper. She would become his wife and they would be married for twenty years. Unfortunately, the marriage didn’t work out, and after two decades together, she filed for divorce.

10. He was the victim of a robbery

Even though Jeffrey Gundlach is a multi-billionaire, and he has the resources for the best home security, it didn’t stop him from becoming the victim of a home burglary. While he was away from the home, thieves broke in and stole some big-ticket items, including a Porsche Carerra, several high-end watches, and a Piet Mondrian painting. The estimated value of the items stolen came to a cool $10 million. He offered a $1 million reward for the painting alone, and half that amount for other stolen items. He recovered most of the stolen items, with the exception of the Porsche which remains at large to this day.

11. He is a really good drummer

In addition to being a whiz at math and in the business world, we discovered that Jeffrey Gundlach is an amazing drummer. His former bandmate Bev Eyre is convinced that he could have used the talent to form a successful career in the music business. She explained that he was fast and had a fantastic sense of rhythm. We’re not sure if there is any correlation to being good at math and a great rhythm drummer or not, but it’s an interesting little known fact about Jeff.

When Gundlach was with his rock band, the group actually recorded their music. We learned that they recorded “numerous” songs. Also, Eyre claimed that Jeff pushed them all really hard and wanted to make a go of it, they didn’t quite make it in the music scene. It seems that fate had other plans for him.

13. He was inspired by a television show

If you’re wondering what Jeff Gundlach’s inspiration to become a wealthy businessman, we know what one of them was. We learned from an interview with Reuters, that Jeff enjoyed watching a television show called “Lifestyles of the Rich and Famous.” This was a series that took a look at how the very wealthy life, hosted by Robin Leach. One episode featured the ten top paying careers. This is what got his attention, and it provided him with a moment of inspiration which set him on a firm track in investments banking.

14. He increased his salary by forty-fold in just nine years

Jeffrey made his first million-dollar paycheck in 1990 as an investment banker. He was good at what he did because of his highly analytical mind that could process numbers and scenarios quickly, which enables him to see trends and patterns and to make wise decisions based upon what he believes the market is going to do at any given point in time. By the year 2009, he had increased his annual salary to a whopping $40 million per year.

15. His former employer accused him of gross misconduct

16. He’s widely quoted in the media

When Jeffrey Gundlach speaks, there are a lot of people who perk up their ears to listen. He is well respected for his knowledge and skills in the investment business. We researched a few articles which featured him as an expert in finance and we discovered that there are a lot of articles written with quotes from the bonds Guru, because he knows what he’s talking about and if you’re looking for investment tips or any other kind of education in the business arena, he’s the guy to listen to. CNBC has multiple articles featuring his opinions and advisements.

Jeffrey’s nickname is the “Bond King.” He’s come by it honestly and it’s really just a form of recognition and even admiration for the man who seems to be the best in this sector of investment. He started out by making millions in bonds, then he turned it into billions, so we think that he has a right to be placed in a high and exalted position. He’s one of the most trusted authority figures on the topic.

Anyone who is interested in making investments can learn a thing or two from Jeffrey Gundlach. He was inspired by an episode of a television show, and look at what he did with a good idea and a lot of ambition and drive. He’s an inspiring person who didn’t have a lot of financial backing when he was just starting out. He, like his mom, did what he had to do to get where he wanted to be in life. He’s an inspiration because he shows us that the common person from a lower-middle-class neighborhood can totally transform their lives if they have a good plan, make wise decisions and give it all that they’ve got.

Gundlach is currently enjoying the fruits of his labor. He’s made a fortune in the investment business, but he also shares his success with causes that he believes in. One of his passions happens to be art. Jeffrey made a generous donation of $42.5 million to the Albright-Knox Art Gallery. It’s located in his home town of Buffalo, New York. They were attempting to expand and the gallery established a capital campaign to help facilitate growth. Of course, the expanded portion will also bear his last name as it will be renamed the Buffalo-Albright-Knox-Gundlach Art Museum. He made the donation in 2016.

20. Jeffrey Gundlach has made a massive fortune

Gundlach has an estimated net worth of $2 billion. He started out with nothing, and he even had to use financial aid to attend classes at Dartmouth College. Now, he’s a very wealthy man who turned his talent for analysis and working with numbers into a lucrative career in investment banking.

The 10 Best All-Inclusive Resorts in Mexico

A Closer Look at The 2021 Ford Mustang Mach-E GT

The Five Best Seiko Alpinist Watches of All Time

How Kim Cattrall Achieved a Net Worth of $40 Million