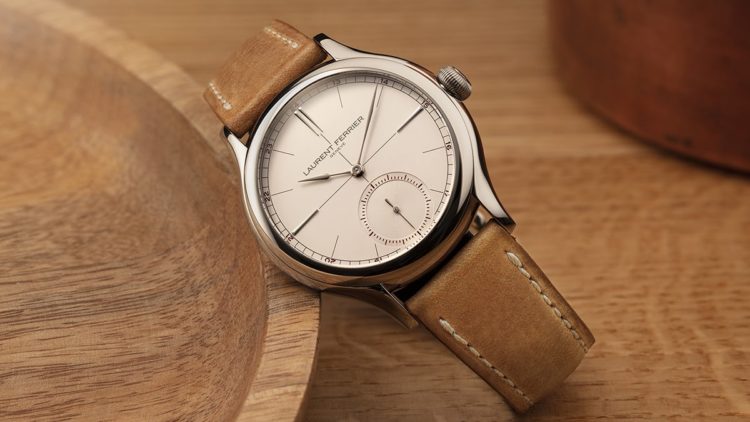 Laurent Ferrier, compared to other Swiss brands, is new in the scene. Considering this, it becomes almost impossible for individuals who are new to the art of watchmaking to comprehend how the Genève-based brand has managed to attract such a huge following. The proliferation of watch aficionados to the brand is akin to a Levée en masse. However, a close examination of the model the nascent company has been rolling out since its inception will give you a crystal-clear understanding of why it has come to be not just accepted, but appreciated. The concoction of the top-tier horological craft coupled with the classical design the company implements on its watches is enough to warrant such a dedicated following.

And it’s not that Laurent Ferrier simply copies and pastes the countering used to make watches of old. No, it’s quite the contrary. Any watch made by the brand invokes a sense of paying homage and not outright plagiarism, by combining basic watchmaking principles used from the conception of the art with the avant-garde designs that have become ubiquitous with the company. The new model the brand has just unveiled, the Laurent Ferrier Classic Origin Opaline, is true to the nature of the brand, and for numerous reasons. Here are ten things you might not have known about the Laurent Ferrier Classic Origin Opaline.

1. The man behind the brand

The man behind the brand is enigmatic. Contrary to the maxim, he is a jack of all trades and seems to be a master of all of them. Laurent Ferrier is the son of a watchmaker, and his father was the son of a watchmaker. From his exposure in Haute Horlogerie early on, it is no wonder why the brand itself is nascent and yet has a classic feel to it. Eventually, he did go on to train at Watchmaking School and even worked at Patek Philippe for over thirty years, before deciding to establish his eponymous watchmaking company. Not so many people know that he was a semi-professional race car driver and even got a podium finish at Le Mans, finishing third.

Laurent Ferrier is celebrating its tenth anniversary with the release of this model. The watch itself is reminiscent of the classical timepiece, the Galet Classic Tourbillon Double Spiral, which the company released in its inception in 2010. And yes, for this particular watch, it does warrant the ‘classic’ moniker, especially considering the accolades it won for Laurent Ferrier in that year’s Geneva Grand Prix.

The Genève watchmaker has used about five distinct design patterns for this particular watch. However, it has decided to go with the classical case, which has become synonymous with the brand over time. Consequently, once you strap on the watch, you get the feeling that you are celebrating this milestone with the brand.

The distinct identity Laurent Ferrier has cultivated over the years it has been in existence, which is the simplistic roundness used to design its watches, is palpable in this one. It’s the type of simplistic beauty you would associate with vintage films and fashion design, and somehow, the brand has managed to convert it into its own. The overall effect is that you have a low-key timepiece that is of high-end quality, and one that speaks for itself when it comes to class and style.

It has a diameter of 40mm and a thickness of 10.7 mm. It is also water-resistant in depths up to 30 m. The case is made of lightweight material; grade-5 titanium.

The symmetry and balance in the watches dial are what you would expect in a Laurent Ferrier watch of any kind. However, the designers have taken several steps to make sure that this particular one has an even slicker look to it. The dial is silver opaline, thus the name, and it is evenly divided from the center into quadrants. The hour markers in the dial converge inwardly. The numerals used for the markers run from 13 to 24 for anyone who desired a timepiece with a 24-hour scale. There is a contrast between the hour markers and the dial because the markers are Burgundy-colored.

The “Assegai”-shaped hands that are ubiquitous with every model the brand uses also grace this particular watch. The hands proliferate the chicness and the class of the dial and the overall watch, and it is no wonder why the watchmakers have decided to maintain them.

The watch has a Barbialla calf leather strap, which is light brown. The stitching used is very reminiscent of classical watches. The straps have a grade-5 titanium pin buckle. Based on the overall design, it isn’t likely that the watch will have a bracelet model for it.

The Classic Origin Opaline has a new wound system under the dial. The LF 116.01 is a new manually wound system created specifically for this particular watch. It’s composed of a Breguet overcoil and a free-sprung balance, and also contains the brand’s long-blade ratchet system. This ratchet system is the reason behind the tactile feel you experience when winding the watch, and even the timepiece’s rich click. In keeping to the recurring theme of simplicity, the movement mechanism is neither noisy nor ostentatious, but its quality can be felt. The wound system operates at a frequency of 21,000 vibrations per hour, which is equivalent to 3 Hertz. It is made of 21 jewels and a total number of 150 components. It has an 80-hour power reserve.

The Laurent Ferrier Classic Origin Opaline is worth 28,500 Swiss francs and will be available in stores from late July to early August 2020.