Home
Food & Drink
The Five Most Expensive Hams in the World 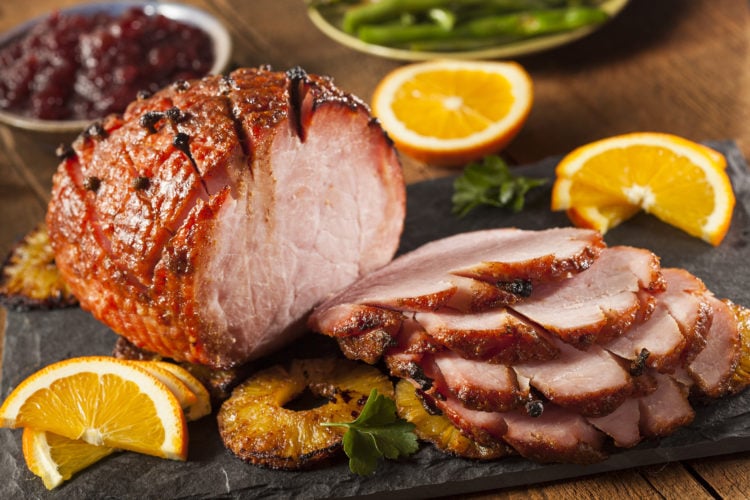 Ham is one of the most loved breakfast food items in the world after eggs and sausages. There are various types of ham in the market: prosciutto, city and country ham, and the black forest ham just to mention a few. A leg of ham can set you back a few dollars but most times it is always worth the price. Be that as it may, there is a specific type of ham that bears its origin primarily from Spain whose cost might shock you. The ham produced from black Iberian pigs currently holds the record as being one of the most expensive pieces of meat in the market today. Before we count down the hams that can cost you an arm and leg, let us first begin with the basics. There are 4 types of Jamon Iberico ham. This is determined by their diet, their breed and the way they are raised. The types of Iberico hams on this list can be easily identified by their tags. This article breaks down 5 of the most expensive hams in the world.

The Cebo de Campo ham is characterized by a green tag. This ham comes from the hind leg of an Iberian pig. The pig is pastured during its last stages and is normally fed with grass and natural compound feed such as acorns. The traditional production process of Cebo de Campo ham takes more than 24 months. This is usually inclusive of curing. Cebo de Campo is born and bred in the Iberian Peninsula and cured in Salamanca. The climate in this area makes the ham sweeter and provides a fruity aroma with a mild flavor to it. The term ‘Campo’ translates to the field. It refers to the freedom that the pigs are given to roam the pastureland while growing. ‘Cebo’ loosely translates to fodder. This is because the pig is usually fed forage as the last stage of its diet. Jamon Iberico Cebo de Campo retails at roughly $320 for a whole leg.

The Iberico de Bellota is identifiable by a red tag. This ham comes from free-range pigs that aren’t purebred. Iberico de Bellota is considered the finest grade of ham. The pigs roam the oak forests called Dehesa which is located along the border between Portugal and Spain. The free-range pigs are usually fed only acorns during their last stages. The ham is normally cured for a period of 36 months. Regulations require that the percentage of the Iberian ancestry needs to be specified on the label. The Iberico de Bellota retails at around $1,087 on Amazon.

Jamon Serrano is a very special and tasty Iberian ham. It is achieved with excellent raw material and contains large amounts of external fat. The Serrano ham is processed and cured with Mediterranean Sea salt and goes through a slow curing process. The curing process of the Serrano takes place in the high mountains of Spain where the climate is cool and dry. The air in the mountains provides a wonderful traditional cure for the Serrano ham thus achieving top-notch aroma and flavor.

Serrano is characteristic of its changing color. In addition to the shiny and glossy appearance of the fat, the Serrano changes color from pink to a beautiful purple-red in its lean parts. It also has a subtle yet salty flavor and its aroma is pleasant and characteristic. According to Serious Eats, if you fancy some Serrano you’ll have to fork out about $1400 for the bone-in ham. The boneless Serrano ham, however, might be lenient on your pocket as it goes for around $400.

You can easily identify a Jamon Iberico ham because of its white label. According to Insider, Jamon Iberico is the most expensive ham and meat in the world. A leg of the exquisite Jamon Iberico can set you back a whopping $4500.It is produced from the back leg of the black Iberian pig raised in the Dehesas woodlands. The Iberian pig is a rare breed of pigs that can primarily be found in the western and southern regions of the Iberian Peninsula.

In Spain, the production of this magnificent ham is limited only to specific regions such as the Salamanca, Cordoba, Huelva, Badajoz, and Caceres. Portugal also produces the Jamon Iberico ham under the name Presunto Iberico. The curing period for the ham is roughly 24 months although some farmers prefer extending the time by another 12 months to obtain the most flavors out of it.

The prices on this list might sound absurd, especially for ham, but they are definitely worth their salt. If you are planning on purchasing these types of exquisite hams, it is advisable to ask for a taste first before buying. Preferably you can ask for a side by side taste of the Iberico ham and the prosciutto. The taste might be distinct and for someone who isn’t big on changes you might end up with prosciutto. Regardless, the hams above have their own unique tastes which make them stand out from all other hams.