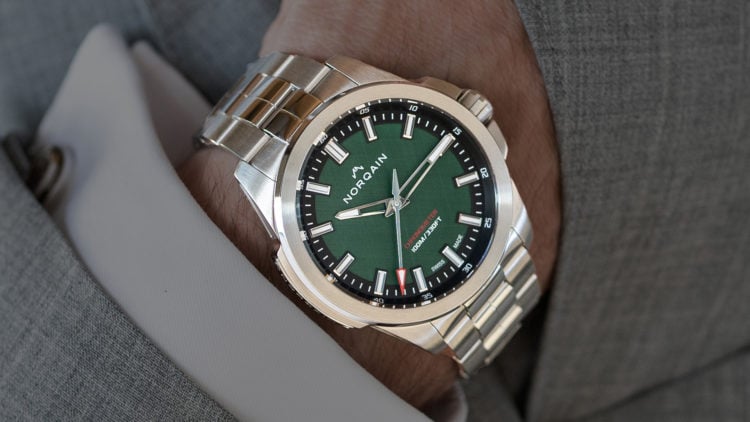 Norqain may be new to the watchmaking industry having been founded just in 2018, but the company comes from a solid history in the timepiece industry. 30-year old founder Ben Küffer’s father, Marc Küffer, serves as the company’s chairman and boasts of over 45 years of experience in the luxury watchmaking world. Norqain has some of the most exquisite and unique watch designs today, and the Norqain Independence 20 Limited Edition is something quite spectacular. It’s exactly the kind of watch that represents Norqain and everything the company stands for. Here are 10 things about the Norqain Independence 20 Limited Edition you should know about.

1. It has Manufacture Calibre.

The Indpendence 20 Limited Edition is the first watch from Norqain that features the brand’s own movement design, the Manufacture CalibreNN20/1. This movement is exclusively from Norqain and was produced in partnership with Kenissi, a Geneva-based watch movement manufacturer. Manufacture Calibre was released early in 2020, and its production and addition to the Independence 20 is one of the things that make the timepiece the only one of its kind.

It may not be the usual luxury fare for some, but the Norqain Independence 20 Limited Edition features a striking dial color that again sets it apart from its peers. This timepiece has a forest green dial that is as clean and crisp as the forest air. The dial only has two other markings—the Norqain brand name and logo on the top along with the chronometer designation in the bottom. The green dial is surrounded by a black color where the hour chapters are located. The difference in colors is remarkable, but what sets this clock face apart is something else entirely. The forest green dial features a scratched decoration on its surface, but this decoration is different for each model.

The simplicity of the clock face can’t be stated enough. The fact that there are absolutely no subdials gives the watch a much cleaner slate. The rectangular indices match the three hands perfectly. The whole effect is clean, but Norqain takes it to another level by eliminating the usual date wheel as well. You will be keeping the most elegant time with this watch, but don’t expect to keep the date. You’ll have to do that some other way.

4. It’s got a solid power reserve.

If you’re a watch aficionado, it’s likely that you pay attention to a watch’s power reserve. The power reserve is the amount of energy the watch has left in the mainspring before it requires winding in order to run. Although the Norqain Independence 20 doesn’t have a power reserve indicator, it features a generous power reserve of 70 hours. It may be on the lower end of the spectrum, but it’s decent enough for a daily watch.

5. It has good water resistance.

You never know when you’re going to get soaked. If you’re going to invest money in a good watch, it’s important that you take water resistance into consideration. Or maybe, you’re just the type that takes it from the office all the way to the ocean. Whatever your cup of tea may be, the Independence 20 can get you there. With 100m of water resistance, the watch can definitely go extended snorkeling adventure with you. Just remember that it’s not meant for diving, and the watch should do well.

There’s something about brand confidence that makes us want a particular product more. Norqain is extremely confident about the timepieces they produce that they are willing to back them up with a warranty. Even though the Independence 20 is new, Norqain is offering a solid 4-year international warranty. That’s a substantial amount of warranty for the price you’re paying for this watch.

The Norqain Independence 20 Limited Edition features a sturdy 316L stainless steel case that has an almost blocky feel to it. The 42mm diameter and 11.8mm thickness makes it more of a midsize watch that sits nicely and flat against the wrist. The band also comes in a beautiful stainless steel with a split center link design.

8. It has another strap option.

If you’re not the link type of watch wearer, you’re in luck with this Norqain. The Independence 20 comes in a beautiful leather strap option. It’s black, sleek, and comes off as a sportier and simpler alternative to the stainless steel (https://www.ablogtowatch.com/norqain-debuts-new-manufacture-movement-with-limited-edition-forest-green-independence-20-watch/). With the black leather strap, the case and the clock face stands out even more.

9. It’s got something special on the back.

Yes, the watch’s most special feature is its exclusive NN20/1 automatic movement. The watch also features 27 jewels, which isn’t the most valuable feature. Regardless, the average mechanical watch has about 17 jewels on it, so even the Independence’s amount isn’t that crazy for the price. What we really wanted to point out is the inscription on the back of the watch. You’ll find Norqain’s motto and core values inscribed in simple lettering: Adventure – Freedom – Independence. It’s a reminder of everything the watch stands for.

If you want this watch, you’re going to have to get your hands on it quickly. Norqain is manufacturing only 200 of the Independence 20 Limited Edition watches. For the price of USD $2990, you’re getting quality, sophistication, and a truly one-of-a-kind watch. Although Norqain has only been around for a couple of years, they are making a name for themselves in the Swiss watchmaking niche. Having a Norqain in your watch arsenal will only be a testament to your style, and the Independence 20 is one of the best Norqain’s you could have.