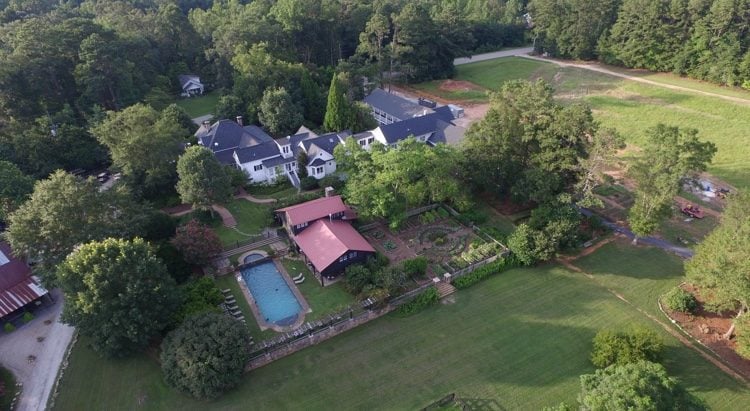 Although Serenbe, Georgia, is merely 35 miles Southwest of Atlanta, the community feels worlds apart. Unlike anything else in the country, this is a place that seamlessly melds quaint, small-town charm with the progressive mindset and artistic approach of a big city, all with the lush Georgia woods and Chattahoochee Hills as a backdrop. What originated as a small inn has evolved organically over the years to become something much more, sprouting distinct neighborhoods, a farm, restaurants, new lodging, shops, theatre and beyond. It all began with The Inn at Serenbe, a pastoral haven about 25 minutes from Hartsfield-Jackson International Airport. In the ’90’s, the woodland retreat was a peaceful weekend home for the Nygren family, but it steadily grew from there, progressing into a 27-room inn surrounded by world-class restaurants, a spa, pools and miles of hiking and horseback-riding trails, just to scratch the surface. While many inns and hotels settle into communities as a means of bolstering local culture, Serenbe is the rare instance where the town actually emerged after the inn, constructed as a symbiotic extension of the Nygren’s heartfelt emphasis on nature and community.

With urban sprawl monopolizing city centers like Atlanta, founder and entrepreneur Steve Nygren set out to establish a sanctuary. Seeing as how beneficial it was for his family, he strove to share that with others by gradually building upon his vision, carving out neighborhoods further into the serene woods. Nowadays, Serenbe is home to roughly 500 residents living across four neighborhoods, each with its own distinct character, look and feel. While the town has become a refuge for residents, it’s also become a bucolic Mecca for visitors from near and far.

For most travelers, The Inn at Serenbe is home base. The charming lodge has two pools (one that’s adult-only), The Farmhouse restaurant, stables, an in-ground trampoline, a pond and Camp Serenbe day camp for kids. Venture further into Serenbe’s 1,000 acres of land to rove through forest trails or along the roadways meandering through neighborhoods Selborne, Grange, Crossroads and most recently Mado, a health-oriented community that’s currently under construction and filling up with retail, a world-class spa, fitness center, pool, hotel, wellness center and a range of housing styles.

Raising the Bar on Farm-to-Table Farm-fresh, seasonal food is a central tenet for the community, highlighting Serenbe’s own farm and its various restaurants. In Selborne, you’ll find highlights like Blue Eyed Daisy Bakeshop, a cute cafe and eatery housed in the country’s smallest Silver LEED certified building. It was the first restaurant to open in Serenbe in 2005, famous for its sweets like brownies, cookies and cupcakes — pastry chef Candi Pittman won Food Network’s Cupcake Wars in 2012. The Daisy also hosts a fun taco night on Mondays.

Just around the bend is The Hil, a premiere restaurant with all the glitz and high-quality one would expect of a metropolitan hot spot. Chef Hilary White presides over an impressive menu of contemporary farm-fresh fare, like coriander-crusted Berkshire pork ribs, okra stew, grilled quail with shiitake mushrooms, and chicken pot pie.

An apt way to dive even further into Serenbe’s farm-fresh philosophies is with a multi-day culinary camp, available to guests, residents and locals from outside the community. Just one of several adult camps, events and classes that Serenbe offers throughout the year, this one is designed to get people up close and personal with fresh food, literally getting to the root of it with time spent on Serenbe Farms picking vegetables to prepare themselves at cooking classes in Grange. Taught by charismatic brothers Matt and Paddy Adolfi, both alums of heavy-hitting Atlanta restaurants, cooking classes are fun, lively and engaging, with beer and wine on deck for those who’d prefer to be more leisurely about it.

Then there’s the General Store, a picture-perfect shop stocked with beverages, groceries, snacks and everything in between. It’s also got a pretty impressive wine selection that rotates regularly thanks to owner and seasoned wine pro Nadine Bratti. A pivotal role in Serenbe’s community-driven core is art, something that translates in various ways throughout the property. Chief among them is Serenbe Playhouse (pictured above), one of the most unique and destination-worthy theatre companies in the U.S. In line with the town as a whole, the playhouse puts nature front-and-center by hosting all of its productions outdoors in different offbeat settings. Take “playhouse” with a grain of salt, because sets are situated in the middle of fields, deep in the woods and elsewhere. It’s all the vision and handiwork of Brian Clowdus, who founded the playhouse in 2009 on a shoestring budget. Over the years, the individuality of each production, from Robin Hood to Grease, has been so wildly successful that each play sells out and fills up with attendees, rain or shine. The Sleepy Hollow Experience and The Snow Queen are a couple annual staples that return seasonally, following recent entries like Macbeth and Cabaret. Unlike typical theatre productions, these are plays where you’re best advised to wear hiking shoes.

Elsewhere in Serenbe, The Art Farm is pioneering in its own way. Taking the notion of art in nature a step further, the farm is essentially a glorified artist-in-residence program, designed to foster creativity by housing creatives in cottages on a 40-acre complex. Much of the site is still a work in progress, as Serenbe works with Auburn University Rural Studio on the build-out, with interiors designed by Steve McKenzie and Kerry Howard.

A Breath of Fresh Air From food and art to hiking, biking, horseback excursions and sustainable practices, the common ground that weaves everything together here at Serenbe is an underlying ethos that when people are connected to nature, it makes for happier and healthier communities. As evidenced by the unfailingly cheerful personalities who call this place home, welcoming visitors with open arms and unparalleled hospitality. It’s not just a real estate venture or tourist destination, but a prime model for holistic living during an age when it’s needed most. In a time of both polarizing political strife and unrestrained urban sprawl, Serenbe is a literal breath of fresh air.