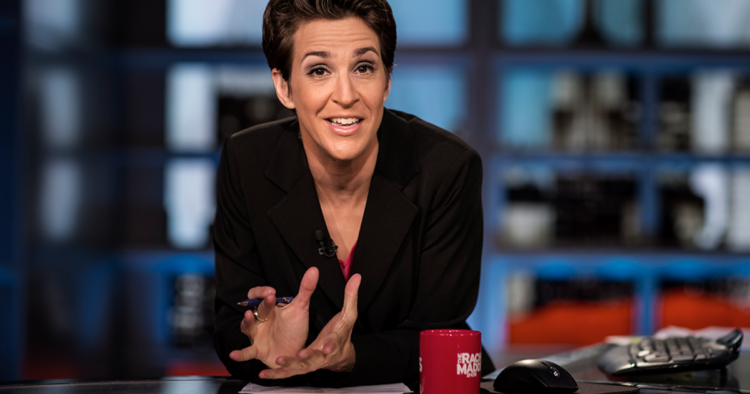 Rachel Maddow has recently been getting more than her usual amount of media attention as her MSNBC show, “The Rachael Maddow Show” has been deemed to be too far left by The New York Times. Her reaction was to have lunch with the newspaper’s editor-in-chief to explain her position and try to mend the broken media fence. To that end, Maddow has been on a verbal assault to be sure viewers are aware of The New York Times’ existence, repeatedly mentioning the newspaper and its journalists throughout her show. However, if you think this is uncharacteristic of Maddow, you may want to see some of the other things that have defined her during her media and personal life. She has done so many interviews that it is easy to lose sight of some of the things she has said and done over the years. In that light, let’s take a look at Rachael Maddow through a slightly different lens with these 10 thoughts.

1. The folks at Fox News are neither competitors nor adversaries – maybe.

Maddow confessed in an interview with Us magazine that some of her best friends just happen to work at the higher rated cable news station.  Well, maybe she didn’t say exactly that. The Us quote was “Some of my best friends in cable news work at Fox News.” There are work relationships and personal relationships, so your interpretation of her may be different.

2. “Oh, please let me interview you.” is an actual quote by Maddow directed at a famous but apparently elusive political figure.

That person, former vice president Dick Cheney, is found in the dedication of her book Drift.  But it raises the question of whether the elusive interview is a personal, political, or journalistic quest. There are things we know, and then there is everything else.

3. Anyone but her ardent supporters will be shocked to learn that she doesn’t consider herself to be any more biased than any other opinion journalist.

Given her high liberal media profile, this definitely seems to be a stretch on her part. But in an interview found at Red Alert Politics she says her basis, “Not more than the average bear. I try to be open about where I’m coming from and what I believe, while also being trustworthy about the facts of what’s going on in the world.” There may be a linguistic sleight-of-hand going on here as she doesn’t say who the “average bear” is. Alex Jones, perhaps?

4. She had a religious upbringing.

The fact she admits that she learned to split wood from her pastor acknowledges that there was some connection to a church or religion in her early years. According to Maddow herself, she was raised in a very devout Catholic home, but her reference to a “pastor” seems a bit odd. As will be seen later in this list, this reference will have another unusual dimension to it.

5. Massachusetts has both professional and personal connections to her life.

Holyoke, Massachusetts would be the place Maddow was first professionally introduced to the world of hosting a media broadcast. WRNX radio was sponsoring a contest to introduce a new on-air radio host, a contest that she won. Today, Massachusetts is the location of her weekend home where interestingly, she doesn’t have a television. There seems to be a “enough is enough” factor when it comes to being a high profile media personality.

6. She has been known to get overly emotional on her show.

We are not talking about language here but the question of whether she is being emotionally sincere or just doing it for ratings. A recent example has Maddow “choking up” during a broadcast when it was announced the Trump Administration had created “tender age” shelters for migrant babies and toddlers. She followed up that scene with a Twitter stream of six messages immediately afterwards, explaining that the phrase is what upset her. It makes one wonder if she uses meat tenderizer or gets choked up at the possibility of its use.

7. There is a Maddow-Kavanaugh connection in her past.

In a weird time event, Maddow would mark her 10 years at MSNBC with the end of the media circus surrounding Supreme Court nominee Brett Kavanaugh. The year was 2018 and both quietly moved on to do their respective jobs without not much fanfare.

8. She has more than Emmy nominations and wins to her credit on IMDB.

It is expected for her to be nominated and win awards from various LGBTQ groups. However, in 2013, Maddow was nominated for a Grammy award in the category of Spoken Word Album as a result of her oration of her book Drift: The Unmooring of American Military Power. Not many opinion journalists can make that claim, and shows the breadth of her overall talent.

9. Her financial data is confusing.

Rachael Maddow has a total net worth of an estimated $20 million. At the same time, she earns $7 million a year in salary from MSNBC. While we all know these numbers can be somewhat inaccurate, having only $20 million after more than a decade of consistently having your own cable news show is confusing to say the least. There are those who will tell us it is none of our business, but being a public figure comes with its downside. Enquiring minds want to know the full story – just like Maddow.

10. Maddow’s genealogy generates some interesting background on her life.

In an earlier item, her Catholic upbringing was mentioned along with the unusual reference to calling a Catholic church leader a pastor. As it turns out, her heritage is one-quarter Dutch and one-half Canadian. That leaves 25% to account for, which is connected to Jewish ancestry. Her ancestors hail from what today are the countries of Ukraine and Lithuania. To say she has a diverse background is an understatement.