Home
Entertainment
The 10 Scariest Roller Coasters in the World 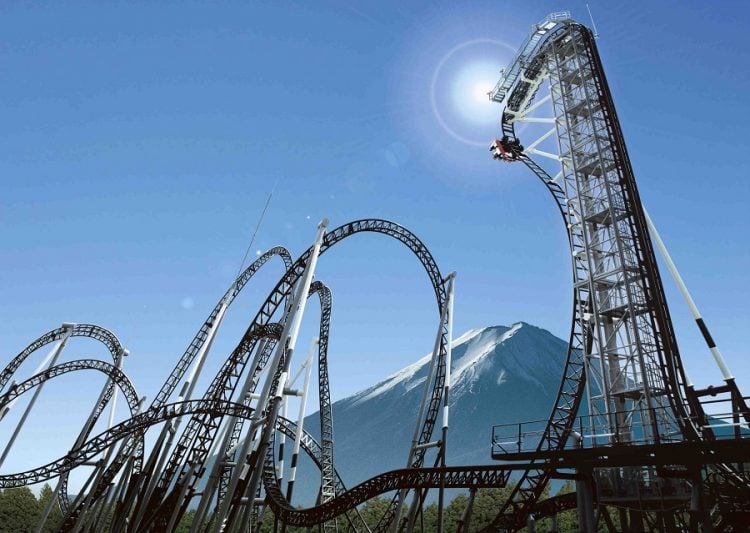 When you get down to it, there are two types of people in this world: those who are terrified by roller coasters and those that would never stop going on them if they could. Depending on the high speeds, incredible heights, and whip-lashing turns, roller coasters can either be exhilarating or terrifying, and there are so many of them across the world that it’s hard to discover which ones are the most intense. Whether you’re a roller coaster die hard or a little more fearful of these insanely fast, twisty, and bumpy rides, here are our picks for the 10 scariest roller coasters in the world.

Built in 2000 at Nagashima Spa Land, Steel Dragon is most famous for its first hill, which takes over a minute to climb to the top of, before riders face a 306 foot drop. Steel Dragon is one of the world’s longest coaster, as it stretches on for 8,133 feet for a ride lasting over four minutes, but it’s that first hill and its steep drop that make it such a terrifying coaster to tackle.

If Steel Dragon’s drop was scary, Kingda Ka’s is absolutely nightmarish. Kingda Ka is the tallest roller coaster on earth—45 stories high, thus being closer to the sky than any Egyptian pyramid—and also one of the world’s fastest, with speeds that reach 128 mph. Furthermore, Kingda Ka, which resides at Six Flags Great Adventure in Jackson, also fires its victims around an upside-down U track in just 59 seconds—this coaster pretty much has it all.

You got to know that any roller coaster named after Superman’s evil twin and nemesis has to be pretty nuts. Even though it’s only 208 feet tall, not nearly high as Kingda Ka or Steel Dragon, it actually drops riders down 221 feet into a dark tunnel full of fog, causing an intense disorientation to those brave enough to ride. However, the most scary thing about Bizzaro, which can be found at Six Flags, New England in Agawam, is the fact that its cars’ sides only come up to the riders’ ankles—allowing them to feel completely exposed and vulnerable.

The people who should be most scared to board Colossus are those who have just eaten. At Thorpe Park in surrey, with a record 10 loops in less than two minutes—a vertical loop, cobra roll, and five “heartline twists”—Colossus is quite the intimidating coaster, especially to those who easily suffer from motion sickness. Also, beware of the fact that the last of these “heartline twists” come right as you think the ride is over, as your about to pull into the station, to fully shock riders.

Formula Rossa was built at Ferrari World in Abu Dhabi, right above the Formula One racetrack and is easily the the world’s fastest coaster, as it attempts to emulate how it feels to race in an actual red Ferrari. In order to do this, Rossa utilizes a hydraulic launch system similar to the type that fighter jets off aircraft carriers also use to ensure that they can accelerate from 0 to 60 mph within the first two seconds of flying. Even though Rossa can’t maintain its 149 mph speed for much of the ride, riders in the front seat of cars are still required to wear protective glasses, the same type that are worn by skydivers.

Similar to Bizzaro, Phantom’s Revenge’s claim to fame isn’t so much with how high its hill is but the ambition of its drop. The coaster, which can be seen at Kennywood Park in Pittsburgh, plunges riders 232 feet into a ravine and underneath the support structure of another coaster. This drop is so crazy that it causes riders to at least, momentarily, believe they might become decapitated.

Voted the Best Coaster of 2010 by Amusement Today, Intimidator, from King’s Dominion in Doswell, is one of the most intimidating roller coasters on this list. The Intimidator combines speed and heights by pushing riders up its 305-foot hill in in just a quick 20 seconds, reaching to 94 mph as it speeds up there.

GeForce isn’t famous for its speed or heights (although it does possess both). No instead, this roller coaster, which can be found at Holiday Park in Hassloch, provides much of its thrills through some simple geometry—it sends its riders down a 184 foot, 82-degree angle hill. What’s scariest about GeForce, however, is when its fourth car became derailed back in 2010. No reasonable explanation could be found for what or why it happened, and while no riders were seriously harmed, they all had to be rescued by firefighters.

El Toro, which is also at Six Flags Great Adventure in Jackson, is overshadowed most of the time by the massive Kingda Ka, but what it provides that most coasters don’t is nine, intense moments of airtime. Furthermore, its record-breaking 76 degree drop is the steepest ever for a wooden coaster in the United States.

Found at Fuji-Q Highland in Fujiyoshida, Yamanashi, Dodonpa is Japan’s second entry on this list. The coaster possesses the record for fastest launch acceleration, taking riders from 0 to 107 mph in just 1.8 seconds. That time-frame and the amount of speed gained put the Rockin’ Roller Coaster at MGM to shame, and the sheer force of that initial acceleration should be enough to temper the excitement of even the most hardcore roller coaster fanatic.