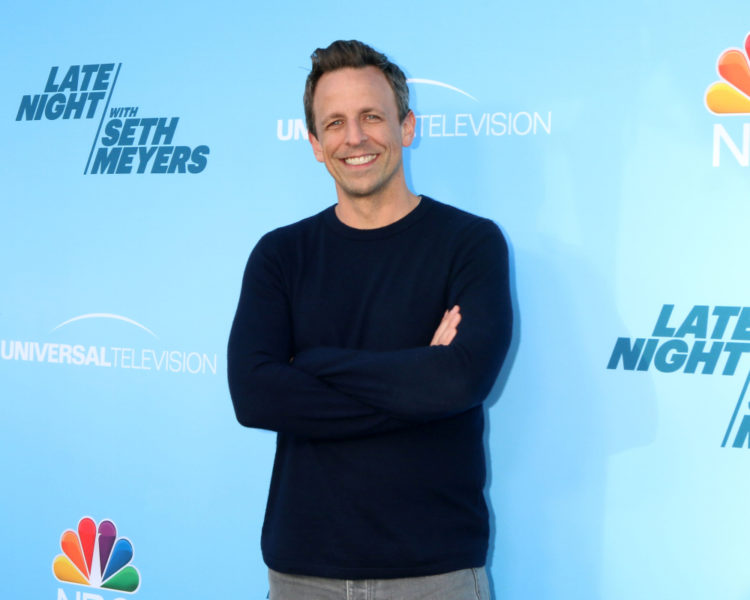 Seth Meyers is an award winning late night talk show host, comedian, actor and writer. He got his start in improvisation and comedy and landed a job as a writer and cast member for Saturday Night Live. After 13 years with SNL, Meyers became host of NBC’s “Late Night with Seth Meyers” following his SNL colleague Jimmy Fallon’s exit to host “The Tonight Show”. Meyers’ has amassed a net worth of $12 million mostly due to SNL and his “Late Night” hosting but also through writing, producing and presenting at awards shows.

Seth Meyers was born on December 28, 1973 in Evanston, Illinois. He grew up in Okemos, Michigan and Bedford New Hampshire. His father Laurence worked in finance and his mother Hilary was a French Teacher. Meyers has a younger brother Josh who is an actor. After graduating from Manchester High School West, Meyers studied at Northwestern University where he graduated with a degree in television, radio and film in 1996. While in college, Meyers was a member of the improvisational group “Mee-Ow”. He would be invited back to his alma mater to give the Commencement Address in 2016. Following his graduation, Meyers became a member of two improv groups, Preponderate which participated in the “Improv Olympic” and a group based in Amsterdam, “Boom Chicago”. His brother was also a member.

In 2001 Seth Meyers auditioned for “Saturday Night Live”. He was hired as a cast member and also write sketches. In 2005 he became a writing supervisor on the show. The following year he became a co-head writer with Tina Fey and was named head writer when Fey left the show. Along with being SNL’s head writer and acting in the show’s sketches Meyers got the coveted role on the show’s regular skit “Weekend Update” with co-anchor Amy Poehler. When Poehler left SNL in 2008, Myers was the solo anchor of the regular sketch until he left SNL in 2013.

During his time on SNL, Seth Meyers did many impersonations and wrote and acted in many popular sketches. His impersonations included John Kerry, Sean Penn, Ryan Seacrest, Anderson Cooper, Prince Charles, Brian Williams and even Nicollette Sheridan. He received critical and popular acclaim for his writing and acting. Some of his most popular sketches included “Abe Lincoln” with Louis CK that parodied the sitcoms “Louie” and “Girls”, “The Needlers”, “Sears Photographers”, “The Adventures of Michael Caine and Peter O’Toole” and the ongoing segment of “Weekend Update” “Really?!” with Amy Poehler. One of Meyers’ most acclaimed skits as a writer is in 2008 when Tina Fey returned to SNL to portray then Vice Presidential candidate Sarah Palin. One of Fey’s favorite lines was “I can see Russia from my house”.

In 2013 Seth Meyers left SNL when he was named the host of NBC’s “Late Night with Seth Meyers”. He replaced his friend and fellow SNL alum Jimmy Fallon who went on the host “The Tonight Show”. Since 2014 Seth Meyers has hosted the late night show featuring his comedic monologues and interview with celebrity guests. His first guest on the show was Amy Pohler. As with all late night talk shows, Meyers’ show features a house band. His band “The 8G Band” includes Meyers’ former SNL colleague Fred Armison.

Acting and Producing and Presenting

Since his television career began, Seth Meyers has appeared in other television shows and in film. His movies include “American Dreamz”, “Spring Breakdown” and “Journey the the Center of the Earth”. He produced 2007’s “Hot Rod” and 2010’s “McGruber”. He recently executive produced “Mapleworth Murders”. Meyers appeared in episodes of the sitcoms “Spin City” and “The Mindy Project” and as himself in “The Office” and “This Is Us”. He competed in Bravo’s “Celebrity Poker Showdown” and co-wrote 2019’s “The Short Halloween” with Bill Hader. In 2013 Meyers co-wrote the Hulu series “The Awesomes” with Mike Shoemaker. Included in his television appearances, Seth Meyers has hosted several awards shows and ceremonies. He hosted the Webby Awards and the ESPY Awards twice. In 2011 he was the keynote speaker at the White House Correspondents Dinner. Meyers hosted the 2014 Emmys and the 2018 Golden Globes.

Throughout his career, Seth Meyers has been nominated for several awards. He has also won on several occasions. He won the Writers Guild of America award for his work on “Saturday Night Live” and “Late Night with Seth Meyers” in 2007, 2009, 2010, 2015 and 2017. He won the Peabody Award for writing on SNL in 2009. In 2011 Meyers won the Primetime Emmy Award for Music and Lyrics for “The Justin Timberlake Monologue”. Most recently, Meyers won the Critics’ Choice Award for Best Talk Show this year and he is nominated for this years’ Primetime Emmy Award for Outstanding Writing for a Variety Show for both “Late Night With Seth Meyers” and “Seth Meyers: Lobby Baby” which was inspired by the actual birth of his second son in his apartment lobby.

In 2013 Seth Meyers married attorney Alexi Ashe. Ashe was an assistant to Brooklyn’s DA working for the Special Victims Unit before leaving to work for the non-profit Sanctuary for Families. She helps victims of domestic abuse and human trafficking. Seth and Ashe have two sons, Ashe and Axel. They live in a $7.5 million Greenwhich Village duplex and have a Georgian style country home in Connecticut. Meyers is a big sports fan. He roots for Boston and Pittsburg teams as well as international soccer teams. Seth Meyers continues to have a successful career as a writer, talk show host and producer. He always hoped to write for television and film and loved doing improv and impersonations. Among his inspirations are Monty Python, Mel Brooks, Woody Allen, Richard Pryor, Dennis Miller, Steve Martin, Jon Steward, Conan O’Brian and David Letterman.