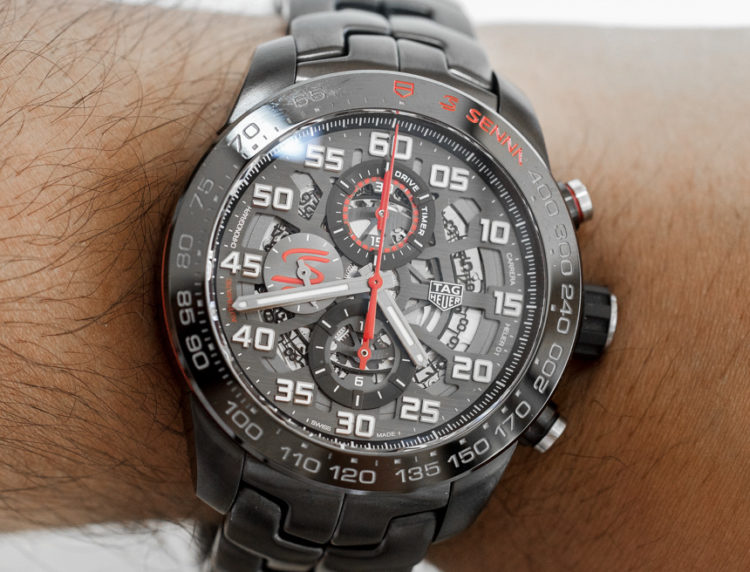 In 1994, Ayrton Senna, a Brazilian racing car driver who’s widely considered to be one of (if not the) greatest F1 drivers of all time, died at the age of 34 in a tragic accident at the 1994 San Marino Grand Prix. His legacy as one of F1’s brightest and best stars lives on to this day, as does his association with one of F1’s longest standing partners, Tag Heuer. The partnership between Tag Heuer and Senna began with Senna’s move to McLaren- Honda in 1988, and survived all the way up until his death in 1994. Even after his lifetime, his legacy has been celebrated by the brand with several special edition ‘Senna’ watches, released in collaboration with the Senna Foundation.

As calibre11.com notes, the very latest in the Ayrton Senna/ TAG Heuer series to be released was launched in late 2019. Designed to commemorate the 25th anniversary of Senna’s death, the collection consisted of two watches- a Formula 1 Calibre 16 and a Carrera Heuer 02 Tourbillon – that, since their release, have gone on to enjoy almost cult status. As, indeed, have all previous Senna watches.

Choosing between the various pieces is something of a challenge – all come with Tag Heuer’s signature blend of appealing aesthetics and advanced functionality, and all have the added advantage of an association with one of the greatest watch ambassadors of all time. But unless you have money to spare, a choice will need to be made. So, how do you go about choosing which Tag Heuer Senna watch is right for you? To help out, we’ve broken down exactly what you need to know about each piece.

The 1994 Tag Heuer 6000 Senna was the only Tag Heuer piece ever created while Senna was still alive. As calibre11.com notes, the design is similar to the standard 6000 Series, bar the engraving of “Senna S” on the bottom of the case, instead of the TAG Heuer logo of the standard model. As the only piece to be made with Senna’s direct involvement, it enjoys a special status among fans – not to mention a considerable price tag.

Released 7 years after Senna’s death, the 2001 Tag Heuer Link Senna was produced in a limited edition run of 1991 watches (a number that, as any true Senna fan will know, was significant for being the year Senna won his last F1 World Drivers Championship). Featuring the “Senna S” logo on the dial and the dates 1988, 1990, 1991 on the bottom of the case in recognition of Ayrton’s three world crowns, it’s a watch that as europastar.com notes, puts the special relationship between Senna and Tag Heuer proudly on display.

After over a decade’s absence, the Senna Tag Heuer collection returned with a bang in 2015 with the release of the Tag Heuer Carrera and Formula 1 Senna. Available in both steel and titanium variants, the two pieces represented a welcome return to form. Both pieces are powered by Carrera Calibre 16 chronographs, while their stunning combining of sporty good looks and superb functionality make them a highly desirable option for anyone looking for a high functioning, statement piece to add to their collection.

Like the previous year’s collection, the 2016 Senna collection consisted of two pieces, a 3-hand watch and a chronograph (although this time, both were Formula 1 models). Stylish, functional, and with the Senna and Formula 1 connection displayed proudly via the dynamic use of color and subtle engravings (check out the checkerboard flag on the caseback and the “Formula 1” text on the dial), the two pieces represent a powerful addition to the Senna/ Tag Heuer partnership. If you want a modern watch that celebrates the legacy and history of one of racing’s most legendary characters, neither option is likely to disappoint.

Senna was one of Brazil’s most celebrated sons, something the Tag Heure Carrera Caliber Heuer 02T Ayrton Senna Special Edition 2019 doffs its hat to in no uncertain terms by featuring the greens and yellows of the country’s flag on its otherwise plain black dial. The hefty 45mm case makes it a good choice for customer’s looking for a substantial piece, while the black rubber and calfskin strap sits comfortably on the wrist. Precision timekeeping is guaranteed thanks to the chronograph powered by a COSC-chronometer-certified automatic tourbillon caliber with 65-hour power reserve. Despite the vibrant colors on the face, the overall style of the watch is relatively subdued, something that’s witnessed in the understated placement of the “Senna S” stamp on the 9 o’clock sub-dial. If you’re in the market for a watch that’s more concerned with keeping perfect time than making statements, the Tag Heure Carrera Caliber Heuer 02T Ayrton Senna Special Edition 2019 – Ref. CAR5A99 could well be your perfect partner.

The 2nd piece to be released as part of the 25th anniversary collection is the Formula 1 Calibre 16 Ayrton Senna Special Edition 2019. As gmtpost.com notes, the watch is fitted with a sporty S-shaped bracelet, a design which Senna himself was said to prefer. In tribute to both Senna and Tag Heuer’s F1 associations, it also features a very handy driver’s extension that allows it to fit perfectly over a racing suit. The link with Senna is most evident in the detailed engraving of his helmet on the steel screw-down caseback, along with a subtle engraving of his name in white at 1 o’clock. Other notable features include a fixed polished black ceramic bezel with a tachymeter scale, a powerful automatic-winding chronograph Calibre 16, and the dynamic use of racing car red on the lacquered indexes, central seconds hand and counter hands of the anthracite sunray brushed dial. A confident piece that combines arresting visuals with first class performance, this is the perfect watch for the kind of customer who’s happy for their wrist to make a bold statement.