Home
Motorcycles
What was That Cool Motorcycle from Hobbs and Shaw?
Prev Article Next Article 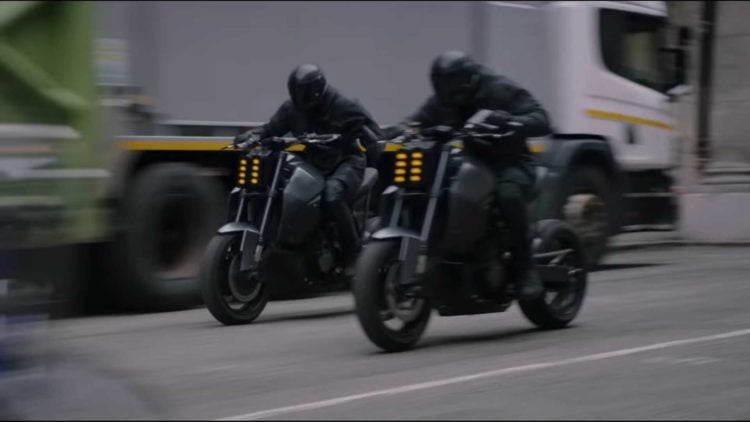 We’re thrilled by the magnificent and futuristic machinery that we see in film and television. Futuristic cars and motorcycles are becoming more believable with advances in technology. The bike that Idris Elba rode in his role as villain Brixton Lore was one of the most spectacular visions of the future we’ve seen. While this isn’t technology that has yet manifested in a production run bike, it’s certainly not out of the realm of possibility for the future. What was that cool motorcycle from the “Hobbs and Shaw” spinoff film from the Fast and the Furious franchise? Continue reading and we’ll tell you.

The motorcycle from “Hobbs and Shaw”

What you saw Elba riding in the film was fairly indistinguishable as to the exact brand and model. The bike appeared to be an autonomous self-driving version that only required riders to jump on board and hold on. The bike stole the show in the film according to Blog Droom. The black leather suit and fine acting made it seem even more impressive. We watched the bike appear to bend and shapeshift as it slid under a truck during one of the most famous chase scenes in the movie. While we know that this type of intelligent bike has yet to be invented in real life, it was thrilling to ponder the possibilities.

The motorcycle didn’t come from a stock version for sure. It was actually a modified Triumph Speed Triple RS model. The creators left the Triumph branding on the fuel tank along with a few other features that identified the model that the bike was based upon. The twin-spar style frame design gave it away. The fabrication team did a bang-up job of adding some cosmetic changes to create a one-of-a-kind motorcycle for the film. They started with a sports bike known for its high performance to start with. They transformed the rear cosmetically and added LED pod headlights in multiples with vertical alignment to create a somewhat foreboding appearance. It looked like a bike that an evil villain would ride. In the film, you wondered if the bike could be more dangerous than its rider.

Specs of the “Hobbs and Shaw” motorcycle

The RS used as the base for the infamous bike was equipped with a 756cc engine that cranks out 121 BPH along with 77 Nm of torque. The bike is fast and furious without any special mods. They paired the powerhouse of an engine with a 6-speed transmission featuring glitch-free gear transitions. Other features include 41 mm Showa big piston forks, Brembo brakes, and at the back end n Ohlins monoshock. The top speed of the bike was clocked at 220 km per hour at full-throttle.

Other niceties include an instrument console grouped into the Street Triple RS sports 5-inch full-color TFT screen. Without mods, the base model RS is available to the general public with Arrow exhausts, a swingarm protector kit, five riding modes for individual, road, sport, track, and rain. The traction control is switchable with ABS and ride-by-wire.

Elba shared his opinion of the specially modified Triumph RS with Digital Spy. The star commented on what was real and what wasn’t on the bike. While the majority of the mind-blowing stunts that were seen in the film were enhanced with CGI technology, he shared that much of what you saw on the bike was real. It’s just not possible for a bike to shapeshift and bend when it slides under a truck in the real world. This is one of the enhancements made, but the bike’s appearance is truly that impressive. The modification team did an excellent job of creating a mean-looking high-performing motorcycle that was suitable for Elba’s character in the film. He added that it’s an electric bike jokingly.

A bike with a customized personality

Elba’s character was a terrorist. He took a major role in the film going up against Hobbs and Shaw played by Jason Statham and Duane the Rock Johnson. The international comedy thriller took viewers across the globe in a variety of situations infused with humor and true suspense. Of course, the motorcycle that the villain was riding would take center stage. According to Motoridersuniverse, The Bond flavored plot featured bad guys on bikes. The modified Triumph helped to visually elevate Idris Elba as the leader of the bad guys with his crew of evil cronies riding modified KTM L8950 SM models in stripped-down form. The bad guys were left anonymous in the film. No offense to KTM which is a notable and highly respected brand. It’s hard to top the modded Triumph when it comes to the aesthetics and the CGI enhancements that made it take the limelight in performance and incredible futuristic stunts that aren’t possible as of yet.

For all of the fans of the “Hobbs and Shaw” spinoff film from the Fast and the Furious franchise, the motorcycle that Idris Elba rode was an impressive machine without modifications. For the sake of the film, the modification team gave it an evil personality and a set of capabilities that we hope to see in the future. It’s unlikely that they’ll ever create a bike that can bend and transform its shape, but the intelligent smart bike with autonomous driving features isn’t that far out of the realm of possibility. This is the age of automation and we’re already seeing intelligent smart vehicles that take on the task of driving and they’re big used in select locations around the world today. Autonomous technology is still in its infancy but we’re seeing rapid advancement with testing and applications for permits for public use happening more and more. It’s just a matter of time before we shall have access to bikes that are almost as impressive as the Triumph RS from the film.