You might not think about fountain pens when you think about expensive things, but there are a few fountain pens that have sold at auction for more than you’re likely to spend on some of your most expensive possessions. Depending on the specific pen in question, it might even be more than you spent on your last automobile. If this is hard to believe, keep in mind that if the right person wants a certain pen and there’s something special about it, people will spend almost anything in order to get their hands on it. Below is a list of five of the most expensive fountain pens that have ever sold at auction. 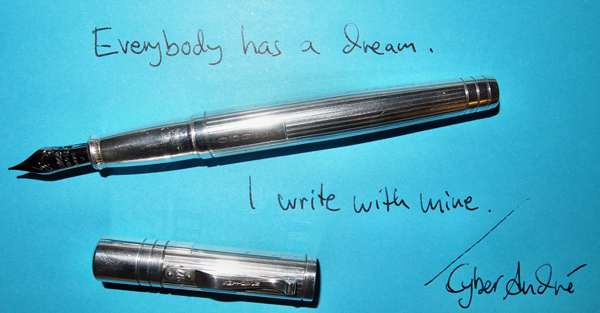 Compared to many of the other pins on this list, this one looks relatively plain. If that’s the case, what makes it so special that it’s worth roughly $1,000? To be honest, that amount pales in comparison to everything else on this list but it’s still $1,000 for a pen. The thing that sets this one apart is that it’s made completely from genuine silver. It’s also hand made in England. Obviously, there aren’t very many of these around, so if you have one sitting around your home, you might decide to sell it at auction. You already know you can make at least $1,000 off of it. This is a fountain pen that’s a little bit different. For starters, it is a limited edition so that sets it apart but that’s not really the thing that makes it so special. In this particular case, there are two things about the pen itself that you just don’t see everyday. The first is that it’s made almost entirely out of real gold. The second is that it’s not just a fountain pen. It also serves as a golden dagger, just in case you might need to have one of those around the house somewhere. 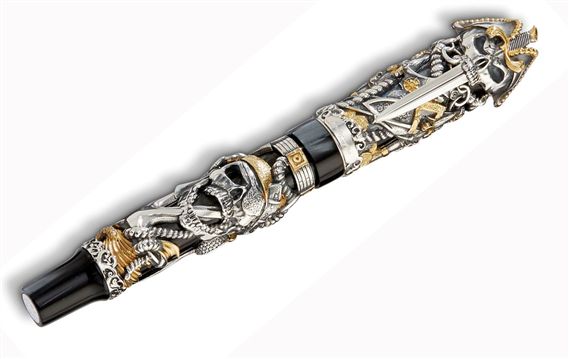 What makes this pen so special? The first thing you’re likely to notice when you look at it is that it’s very unique, to say the least. In fact, the pen has skulls and what looks like dead pirates wrapped all around it, if you’re into that sort of thing. Aside from the fact that some people will probably pay a lot of money just to have some type of macabre thing like this around the house, the thing that really makes the pen worth almost $6,000 is the fact that all of the detail work is done in either sterling silver or 14 karat gold.

Just as the name implies, this one is all about the Far East, more specifically a certain emperor that was lauded in the area. It has a great deal of relief work done on it, something that you definitely don’t see everyday. It’s a relatively rare find, so that fact coupled with the painstaking work, makes it worth a lot of money. The name basically says it all for this one. It is indeed a pen that is completely encrusted in real diamonds from top to bottom. It’s also designed by an artist and there is no other pen like it in existence. This was done purposefully, to ensure that this particular writing instrument would be completely unique. Obviously, the effort paid off. This particular example ended up costing more than a lot of people’s houses.

As you can see, just because it’s a small item doesn’t mean that it doesn’t have big money attached to it. Even the most economical pen on this list, if you can call it that, will set you back a little more than $1,000. Most of the writing utensils on this list are unique, in addition to being made out of certain materials that make them worth more than they would otherwise be. That being said, it’s almost hard to believe that anyone would pay this much for a fountain pen. Hopefully, they’ll keep it in a safe place and it won’t end up getting lost somewhere along the way. The truth is, all five of these examples are worth so much money that most people would be afraid to actually use them.