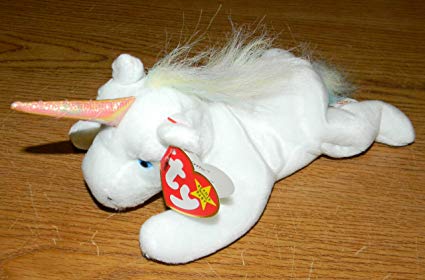 If you follow certain collectibles, there’s no doubt that you’ve at least had a question or two about whether or not the Beanie Babies are worth looking into further. You might even be one of the hundreds of people that has an entire stack of these things stored somewhere, often put away for so long ago that you would have to rack your brain to remember where you even put them. If you just happen to run across certain ones in that group, you might be surprised at how much money you could get for them, especially under the right circumstances.

Take Mystic the Unicorn, for example. This is definitely one of the cuter examples of the Beanie Babies that were made during that time and if you have one that is in really good condition and has certain error tags on it, you could get approximately $2,700 for it. If you do a search on eBay for this particular Beanie Baby, you can find them for sale for as little as $3 or as much as $3,000. If you’re like most people and you’re wondering why there’s such a big difference in the dollar amounts here, it’s usually because of one of two things. First and foremost, not all of the examples of Mystic the Unicorn are worth as much money as others. A lot of it depends on whether or not they have certain error tags, as this has a dramatic impact on the amount of money you can get for them. Of course, you have to take their overall condition into consideration as well. The ones that are in better shape will naturally get you more money than ones that are showing a lot of wear or have stains on them. Last but certainly not least, you have to assume that at least some of the people who are selling these don’t really know that they can make that much money off of them or they wouldn’t be selling them for $3 a piece.

The good news is that if you can find one for sale for less than $5 and then turn around and resell it for almost $3,000, you have gotten yourself a very nice payday and you’re actually doing very little legwork. This is why people that research collectibles are so picky about what they purchase. If they’re lucky enough to purchase something from someone who doesn’t necessarily know the value of what they have, they stand to make a lot of money by purchasing it at a tremendous discount and then reselling it, sometimes for thousands of dollars. If you’re considering getting into the collectibles market or you just want to buy things online and then resell them for cash, these are the types of things you need to know. These tips can help you get yourself a decent payday without making you feel like you’re beating your head against a brick wall in order to do so.

As it turns out, there’s even more good news when it comes to this particular Beanie Baby. Mystic the Unicorn was in production for five years, from 1994 until 1999. Unlike many of the Beanie Babies, virtually all of the examples of Mystic the Unicorn seem to be worth a decent sum of money. That certainly isn’t always the case, but in this particular instance, it’s unlikely that you will get significantly less amount of money for one made in 1995, for example, as opposed to one made in 1998. Obviously, that makes it easier for you if you intend to buy and then resell one of these Beanie Babies. It’s actually a lot less legwork than you might expect with this particular example because you don’t have to drive yourself crazy trying to figure out exactly what year your particular example was made. Unlike some of the other Beanie Babies where the exact year of manufacture makes a huge difference in their overall value, it doesn’t really seem to be a big deal here. Therefore, you would do well for yourself if you could get your hands on an example and then resell it for far more money than you’re likely to pay.

So, let’s say that you’ve decided you’re going to find one of these examples and purchase it with the intention of reselling it online for several times more than you paid for it. You might be wondering what your best avenue is when it comes to reselling it, especially if you’ve never done this type of thing before. It’s actually quite easy but it can seem a bit overwhelming at first. Your best bet is to use an online platform to sell it. As you probably already know, there are several options available, not the least of which includes sites like eBay and Amazon, along with dozens of others that are not quite as well known. Once you find the example that you decide to purchase and you have it in your hands, all you have to do is decide which platform you want to use, create an account and then set the price that you want.

If you’re using an auction platform like eBay, your best bet is to set a minimum price so that you don’t end up getting hosed on the deal and then decide how many days you want to include in the auction. After that, you can sit back and let other people duke it out. For example, you might set your reserve price at $2,000 and say that there are five days in the auction. You hope that somebody will see it and start a bidding war, which drives up the price. It has happened with other examples of this exact same Beanie Baby on that site and people have ended up selling them for $5,000, as previously mentioned. If you would rather, you could also sell it on Amazon and decide how much you want to sell it for. Either way, it all comes down to the amount of money that you make versus the amount spent in order to get your hands on one. If you know what you’re looking for you could sell one of these a week and make more money than you know what to do with, at least in most cases. That’s precisely why so many people are interested in doing this sort of thing. If this is something that interests you, you don’t want to wait too long in order to do it. Otherwise, someone else is likely to beat you to it.