Home
Travel
Hotels
The Four Seasons Hotel at The Surf Club: A Hotel With a Future as Glorious as Its Past 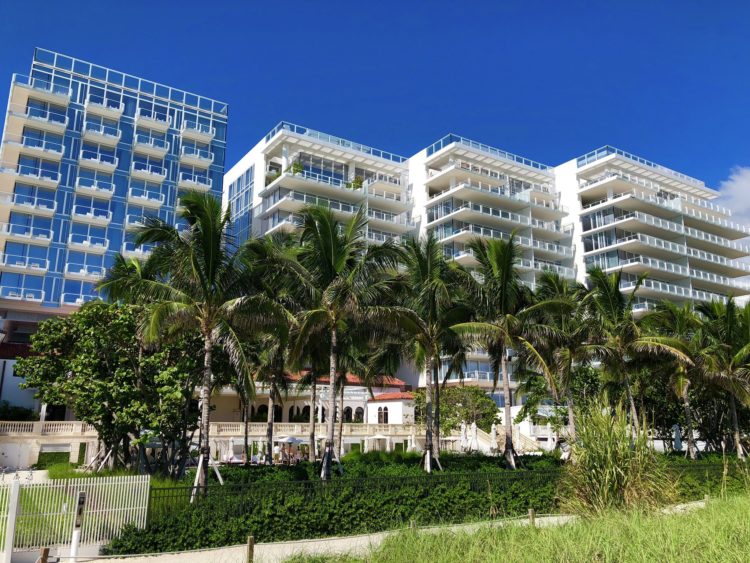 There are few hotels in the world where its genesis hosts a fabled past at nearly every turn. There are fewer still that have taken that past and reimagined it to the present while keeping its historical, fashionable and elegant integrity in such a way that its future is not just rosy, but assuredly grand. The Four Seasons Hotel at The Surf Club in Miami’s North Beach’s Surfside section is just such a place. Set on nine acres of prime real estate with 900 feet of immaculate coastline, it opened in March 2017 following three years of exquisite renovations to the original structures of the iconic Surf Club and new construction of the hotel and hotel residences flanked by two private residence towers. 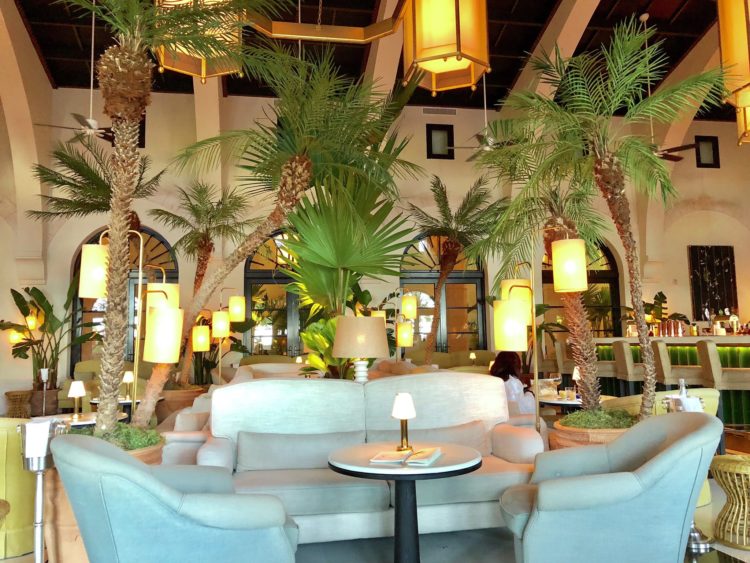 The concept of The Surf Club originated with tire magnate Harvey Firestone and some affluent friends in the 1920s. With architect Russell T. Pancoast at the helm, he designed The Surf Club in a grand, Mediterranean-Revival style. The Surf Club doors opened on New Year’s Eve 1930, at the end of Prohibition and the beginning of the Great Depression.

Notwithstanding this less than impeccable timing, The Surf Club not only survived, but thrived. It ultimately became the playground of the well-connected, the well-heeled, and quite naturally, a veritable ‘Who’s Who’ of Hollywood. To name drop, guests at its zenith included Henry Ford, Dr. John Kellogg, the Duke and Duchess of Windsor, General Douglas MacArthur, Joseph Kennedy, Sr., Noel Coward, Tennessee Williams, Cecile B. DeMille, Gary Cooper, Douglas Fairbanks, Joan Crawford and Bob Hope.

In the 1940s, The Surf Club mobilized for World War II. When the US military took the club over, some members were lodged there while officers were entertained in the ballroom. In support of the war efforts, some members aided the Red Cross that had an outpost there. After the war, The Surf Club picked up precisely where it left off. Winston Churchill visited, painted and drank there, Elizabeth Arden directed chic fashion shows, while Jerry Lewis no doubt made other guests like Alfred Hitchcock, Elizabeth Taylor and The Rat Pack laugh themselves silly. 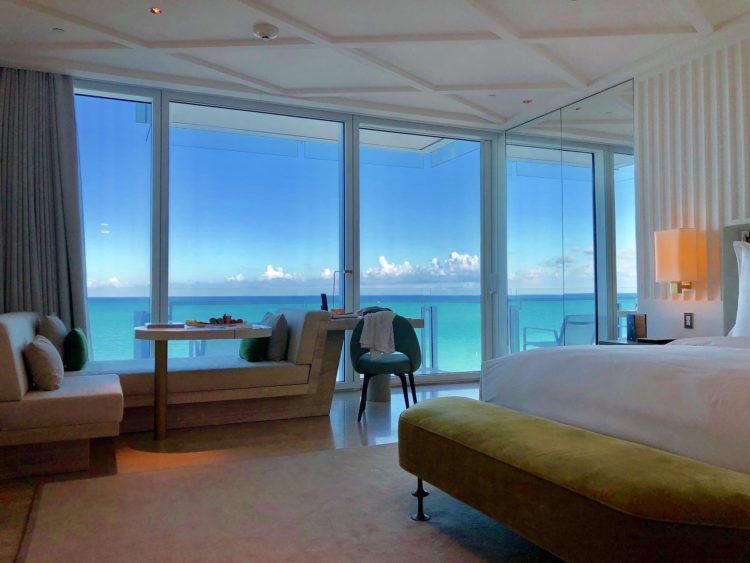 By the early 2000s however, it was time to consider ushering in a new era that not only memorialized The Surf Club’s illustrious past, but also would pave the way for a future that respected its lofty origins. With such a historical backdrop, the enormity of the task of getting this property’s redevelopment exactly right becomes crystal clear. Enter Nadim Ashi, businessman, haute couture developer extraordinaire and CEO of Fort Street Partners, who was the brainchild behind this perhaps daunting-to-anyone-else endeavor. The Surf Club had 106 owners and Ashi met with every single one. This included a 90-year-old member who told Ashi he had first dance in the corner of what is now Le Sirenuse Champagne Bar, and who relayed that “he still remembered the smell of her hair.”

Ashi had to convince them that not only would he maintain the soul and heritage of the legendary Surf Club, but that he would also preserve and pay homage to its formidable history while simultaneously creating a new tradition of luxury and design with contemporary features. Ashi’s soft spoken, humble persona along with his vision for The Surf Club sealed the deal. Like any great developer and businessman, Ashi surrounded himself with the most talented people for each task of the project. Pritzker award-winning super star architect Richard Meier – of Los Angeles’ Getty Center fame – designed the new structures and perfectly married his leading edge creativities to the original buildings with flawless harmony.

The impeccably designed interiors were the magic of Parisian architect and interior designer, Joseph Dirand. He combined light and modernity with clean lines and comfort, resulting in blissful, chic elegance. Many pieces of remarkable contemporary art throughout the property are part of patron and art collector Cathy Vedovi’s collection. Her deep connection to The Surf Club arises from personal experience: she was a club member as child. The Four Seasons and Antonio Sersale, proprietor of Positano’s landmark La Sirenuse Hotel associated. Thus came Sersale’s first American launch, resulting in the hotel’s La Sirenuse Restaurant possessing every bit of panache as the original.

And finally, The Surf Club Restaurant by world-renowned, seven Michelin starred Chef Thomas Keller. As Chef Keller was raised in Palm Beach, this is a unique homecoming allowing for a symphonic choreography of his amazing culinary skills coalescing with an interior space designed by Martin Brudnizki. After five years of planning and construction, the Four Seasons Hotel at the Surf Club opened in March 2017 to acclaim. Needless to say, it lives up to all it attempted to achieve, and more. The ‘estate’ is a unique, multi-use combination. Currently it comprises the Four Seasons Hotel with 77 rooms and 27 hotel residences for longer stays. Then there are 119 private condominiums in the North and South Towers. There is a sparkling, state-of-the-art fitness center, the luxe Four Seasons Spa, cabanas and four swimming pools, including a “quiet” pool, as well as a kids club. Then of course there is that utterly marvelous, expansive white sand beach.

The view from my large room was, in a word, intoxicating, with its focal point toward the ocean enhanced by floor to ceiling windows. The modernist design of the room was both contemporary yet extremely inviting. Textured white walls and white, diamond-shaped beamed ceilings were softened by intensely beautiful and rarely seen, emerald-hued Irish green marble, a color picked up by the velvet settee.

In-room Nespresso machines made early mornings on the balcony sublime, while the comfortable work desk and sitting area assured that work which had to be done did. The white marble dual vanity bathroom with an enormous soaking tub and separate rain shower is significantly larger than many New York City studios. Rooms have all the technology one could dream about, including electric shades and drapes. Indeed, when I returned to my room before sunset one afternoon, much to my surprise, the drapes opened effortlessly on their own to that marvelous view delighting this techno-challenged writer. There are also I-Pads replete with useful information, and convenient bedside panels to control everything in the room.

With its soft opening just a few weeks ago, dining at The Surf Club Restaurant by Thomas Keller is every bit a scrumptious affair as the west coast’s French Laundry, while the menu here is a la carte. With an atmosphere of casual elegant cool, the dining room mixed Miami’s Jazz age splendor with art deco and Latin American leanings. Sommelier Tim Knapp selected excellent pairings while I enjoyed an expertly prepared Cesar salad made table side and I seriously swooned ¬– perhaps to the chagrin of my dining partner ¬– over the flavorful, perfectly cooked rib eye steak that was so tender my knife was nearly unemployed. The creamy, steamed cheesecake happily reminded me that I would never in this lifetime be a size zero.

There is naturally no shortage of things to do, whether lazing on the beach’s white sands or at one of the pools. Running on the gracefully meandering boardwalk mornings or early evenings is delightful. Or if one needs to engage in retail therapy, Bal Harbour is a short drive away. Better yet, grab one of the hotel’s beach cruisers for the 15-minute bike ride along the boardwalk. Not surprisingly, the hotel gym is spectacular. Like the guest rooms, it has floor-to-ceiling windows and strategic lighting. In addition to the state-of-the-art equipment, it has HOCK free weights made with stainless steel tips and polished walnut grips that are so beautiful and comfortable to use that one actually wants to touch them, if not lift them.

Dinner at La Sirenuse is elegantly refined though informal. The building’s beautiful original 1920s details, such as the arches – which were removed during the redevelopment then reinstalled – are coupled with large jade-colored palms and other lush greenery reminiscent of its historical hey day. The Southern Italian cuisine of Le Sirenuse is lovingly prepared by Chef de Cuisine Antonio Mermolia who said that “[m]any of the recipes were originally my grandmother’s. I simply reinterpreted them.” And reinterpret them he did into an explosion of deliciousness.

While every dish was a culinary masterpiece, the standouts were the mozzarella poached in its own milk, and the mushroom ravioli. When the restaurant’s Assistant Manager Kevin Morand appeared tableside with a sphere of truffles nearly the size of a baseball, I nearly fainted. I am pretty sure that proposing marriage with that as a dowry would have been a reasonable offer. The evening’s pièce de résistance was the aptly named chocolate orange dessert: a cold, crunchy, textured outburst of rich chocolate and tangy citrus.

Adjacent to Le Sirenuse is its Champagne Bar and the perfect place for an aperitif or post dinner libation. It has the largest collection of fine champagnes in Miami and a creative cocktail menu that may glue you to your seat as you contemplate the horizon.

My last afternoon was spent at the hotel’s world-class spa. Extensive use of white marble and blue-and-white tiles throughout gave the same elegant airiness as the hotel. Its eucalyptus-infused sauna was marvelous and pre and post-treatment ocean view pods possessed the most ergonomically comfortable chairs I have ever enjoyed. The strategically placed jasmine-steeped marshmallows and date-coconut treats made me think world peace was possible. To say that my spa experience was transformative would be akin to saying Frank Sinatra could hum a few bars.

Past, present and future 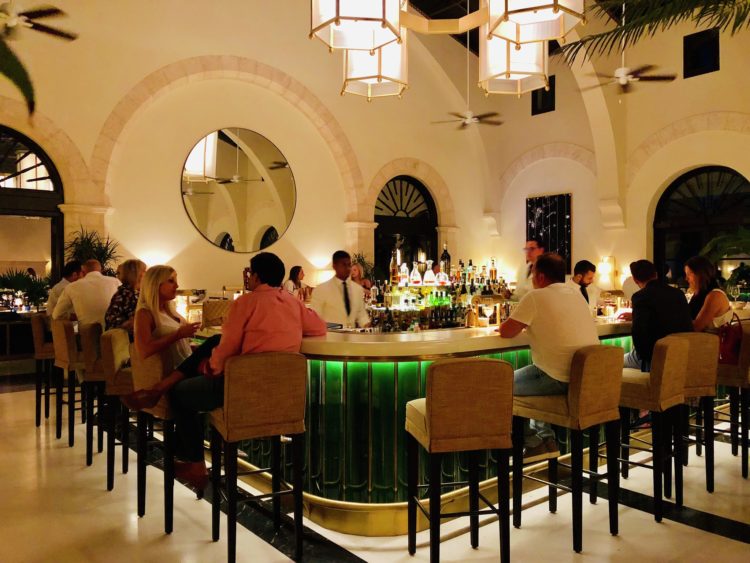 It is true that there are many grand hotels in the world on many beautiful beaches, but only a precious few can boast a past like that of The Surf Club. Long before I was born, The Miami Herald ran a 1959 story with a title that read “Spectacular is Word for the Surf Club.” In the talented hands of Nadim Ashi and his gifted team, that old title rings just as true today. The Surf Club can no doubt look forward to a most glorious future, all the while keeping its historical and colorful past passionately preserved for generations to come.