Home
Cars
The History and Evolution of the BMW M6 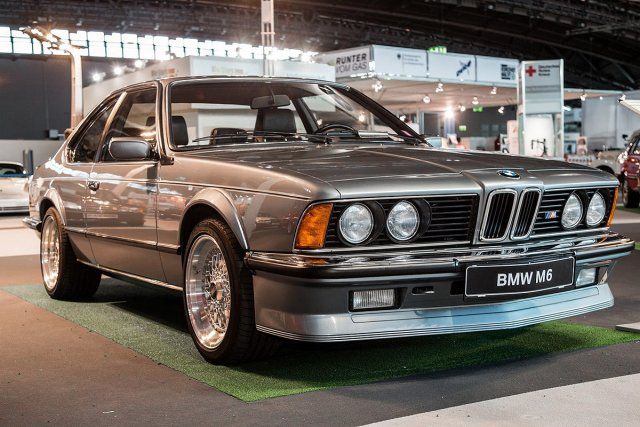 The BMW M6 made its first appearance in 1983 and it owed its ancestry for the success that the 6 series would enjoy in the generations to come. Enjoying a long and prosperous run for Bavarian Motor Works, the first model received its DNA from the earlier 3.0 CSL racing tourer. The in-line 6 3,340cc engine delivered 360 horsepower and it exhibited innovations and technological advancements that were suitable for carrying forward into the new line a decade later. The M6 was based on the premise of the need for a high-performance tourer that delivered the whole package. The ancestry from the 1970s evolved into a more powerful and lighter concept that laid the ground for the design of the M6. The bar had been set high and the M6 rose to the occasion. 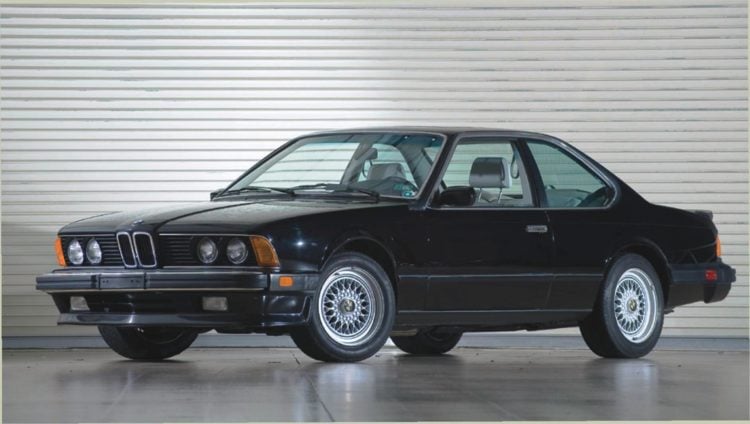 The E24 M6 had a 6-year run beginning in 1983 and ending in 1989. The 2 door coupe was designed by Paul Bracq and assembled at the Dingolfing, West Germany manufacturing plant. The 3.5-liter engine generated 256 horsepower and was matched with a 5 speed Getrag manual transmission. The straight-six was inherited from the M88 M1 in a modified version. The M6, in general, reached a top speed of 158 mph, with the exception of Rug Cunningham’s recorded top speed of 176 mph at the La Carrera Classic Race held in 1989 in Mexico, and was named the second fastest BMW produced, coming in second only to the M1. The aesthetic put one in mind of a hungry shark and the car received accolades and adoration for its speed and elegance. It was set apart from other E24s with front grille M badges, BBSRS wheels, a larger air dam in the front and a rear lip spoiler. The second Generation M6 was the E63 that was produced from 2005 through 2010. This marked yet another milestone in the evolution of this model in a premium coupe with itis concept revealed at the 2005 Geneva Motor Show. It was only a few months later that the production model was made available to the public. This new member of the family bore the strong DNA of its predecessors with a seemingly natural evolution that followed suit with advances in automotive technology that were applied in an impressive high-performance product that excelled when put to the test. We’ll start with power and speed. The acceleration was remarkably impressive with the ability to move from zero to sixty in just 4.6 seconds. The new M6 topped out at 205 mph but production models limited the top speed electronically to 155 mph, which for most was more than adequate. It was powered by a 5.0liter 10 S85 engine that cranked 507 horses and 383 lb.-ft. of torque. The engine was paired with a 7-speed single clutch SMG or a 6-speed manual transmission.

New lighter materials such as thermoplastic, aluminum, and carbon fiber reduced the weight to less than 3,800 pounds. Noticeable exterior features including revised mirrors, updated side sills, and a new front grill were also welcomed as aesthetic enhancements which set it apart from its elders. The new design was thanks to the contributions of Karl John Elmitt and Adrian van Hooydonk with assembly completed at the Dingolfing plant. It was also released in a convertible format. 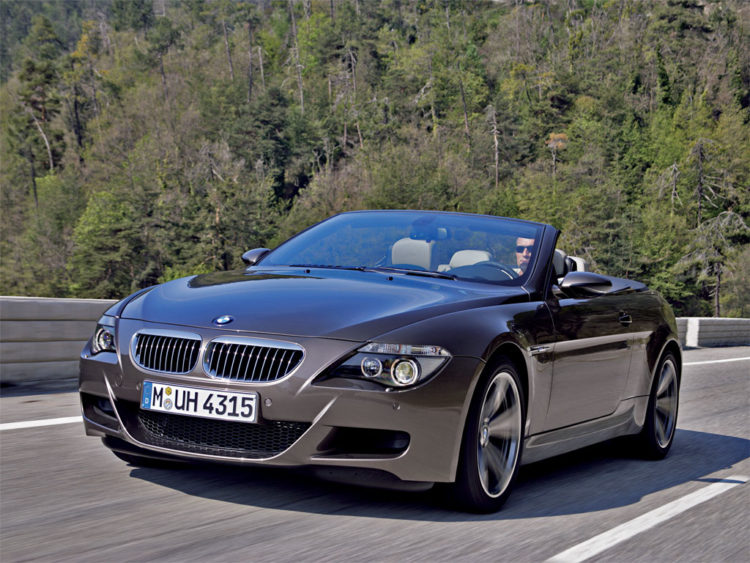 The M6 was offered in a choice of a convertible body style or a coupe. The 2009 model was tested to sprint from zero to sixty mph in 4.5 seconds and came with an updated HD radio and iDrive controller. In 2010, the last ten cylinder M6 was produced. There was be a refresh within two years. The third generation of the M6 was presented at the Geneva Motor Show in March of 2012 after details for the new line were announced the month before. 2012 redesign of the M6 brought this luxury vehicle to a new level of performance. It was now equipped with a 4.4-liter twin-turbocharged V8 engine that promptly delivered 560 horse power with 500 lb. ft. of torque. This was the most powerful coupe and convertible that the brand had produced and it was well noted by an appreciative public. It came packed with improvements that made handling a highly enjoyable experience through the new Active M differential and the M Dynamic Damping Control. It was also designed with extreme luxury in mind with the addition of dual zone climate control, front heated seats with 14-way adjustment, a stereo system that featured 16 speakers and a navigation system that was voice activated. Upgrades for the 2014 Gran Coupe included the optional six-speed manual transmission and carbon-ceramic brakes for those who preferred. Nader Faghihzadeh is the designer who took the lead for the third generation of M6 vehicles. They are made in a 2 door convertible, a 2 door coupe, and a 4 door gran coupe. This generation is powered with a BMW S63B44T0 Twin-turbocharged V8 4.4 liter engine with an output of 560 horsepower. These engines may be paired with either a 6-speed manual or a 7-speed M-DCT transmission.

The new generation of the M6 inherited multiple characteristics from previous models. The 7-speed M-DCT tranny and the S63 engine are DNA from the M5 yet the aluminum, thermoplastic and carbon fiber make it a lot lighter in weight. An impressive change in the top speed raised it from a former speed of 155 mph to a whopping 189 mph with a de-limiting measure taken. The new M kidney grill was added but the old M6 badge from the first generation was inherited. The family ties in the third generation are still strong and apparent, but as with any offspring, the natural and required evolutionary process demands new features and a forward progression that holds with advances and innovations which are characteristic of the era we live in. 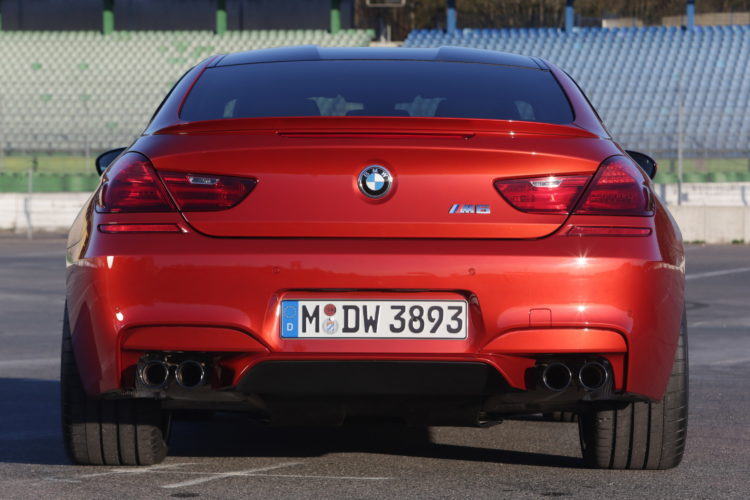 This special model featured an updated twin-turbocharged V8 engine that cranked out 600 horsepower and 516 lb.-ft. of torque. The jazzed up version delivered a sweet acceleration time with the couple achieving zero to 62 mph in a mere 3.9 seconds and the convertible acing the test in 4.0 seconds, but who’s splitting hairs? Both versions were a hit with BWM enthusiasts who liked the combination of sportiness, speed, and well-defined luxury. The 2014 Competition Package gave discriminating drivers something new to look forward to and it kept interest in the brand and its amenities high. It would have been a shame to not produce a racing version of the M6 and it is with this notion in mind that the GTLM was built. The racer was made especially for the IMSA WeatherTech SportsCar Championship and it was the intended successor of the Z4 GTE. This supersport made its appearance in 2016 and although it wasn’t a winner in its first years out, the following season saw four wins, much to the relief of BMW. In 2018, a new racer came along from BMW as its successor and when the M8 GTE was birthed in 2018, production of the M6 GTLM ended. It only had a two-year run but its final year was a good one that at least would earn the model an honorable mention in the annals of BMW history. 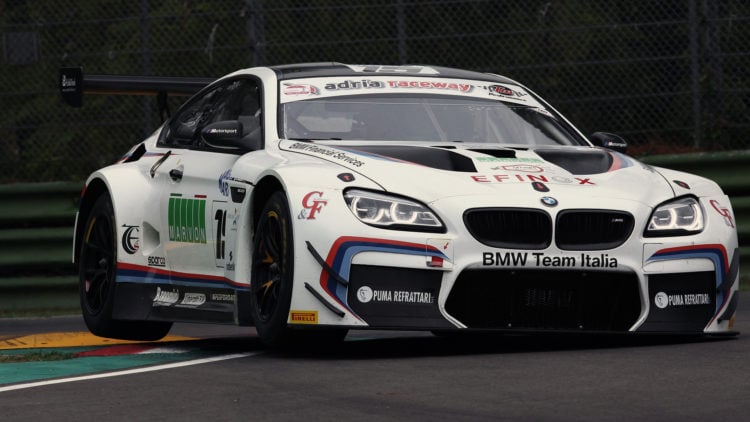 Plans for the replacement of the Z4 GT3 were underway in 2015 as conceptualizations began flying around as early as 2010. They chose the M6 as the base inspiration and set out to design a new racing version that would meet with FIA safety standards. The major changes that the design team made to the M6 were a few modifications in the engine that would make it suitable for motorsport utilization. It was the honor of Jorg Muller to drive the new GT3 variant of the M6 out to be revealed to the world in 2015. The GT3 hit the ground running in 2016 and captured multiple wins, as expected, much to the delight of the Bavarian Motor Works team. The third generation of the BMW M6 continues forward in a Base Gran Coupe or a convertible model. The M6 Coupe variant has been discontinued. The average new price is $127,590. It’s every bit the high-end luxury vehicle that its earlier ancestors were. The new M6 is a little lax on fuel efficiency with average ratings of 14 mpg in the city and 20 on the highway, but it’s a tradeoff for the 560 horsepower and the 500 lb.-ft of torque it delivers. It’s easy to do a burnout whether it is intentional or accidental.

The high-performance just keeps getting better. BMW has set the bar high and each new model year brings something a little more special than the last. It comes with 20-inch alloy wheels as a standard feature and a performance-tuned suspension and Active M differential and a drive mode selector for the times when you want to have that sports mode experience. Thee headlights are full LED and the front seats have evolved from the heated 14 way to a new and improved heated 20-way power adjustable version with multi-contour features. It’s decked out with Bluetooth and a Harman Kardon audio system with 16 speakers. More new technology includes a special BMW iDrive interface that features a 10.2-inch screen with a navigation system. Keyless entry and start are also included along with a rearview camera, ambient lighting, parking sensors, and a wireless phone charging pad.

There are quite a few options available in the new M6 for 2018. The standard leather seats can be upgraded to individual two-tone leather upholstery and for extreme luxury inclusion, a heated steering wheel is also available. In addition, you can special order 2018 with ventilated front seats and you can upgrade the speaker system to a Bang and Olufsen 16 speaker unit. In the Gran Coupe, you can upgrade to heated seats in the rear to make your passengers more comfortable in cold weather. Other options include power rear and side sunshades, active front seats, Apple CarPlay, a surround view camera system, night vision, and carbon ceramic brakes. Of course, these upgrades also create an increase in the price. 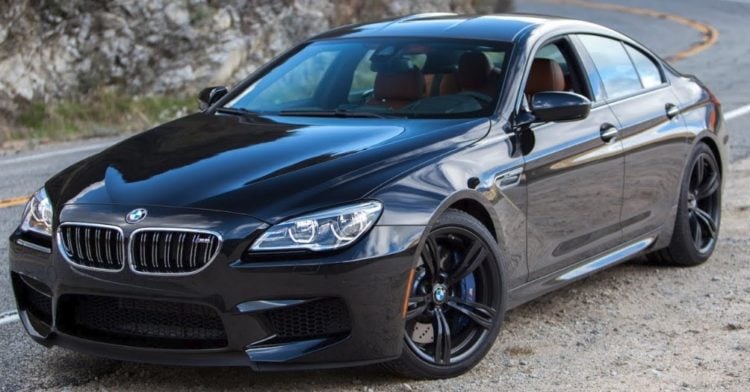 The 2018 M6 comes with standard automatic high beams and adaptive cruise control. A driving assistance packaged with a variety of assistance features are also available. These include speed limit information, blind spot monitoring, forward collision warning, pedestrian detection lane keeping assist, and automatic emergency braking. The new technology warns the driver when there is a potential for danger.

The BMW M6 has come a long way since its first inception in 1983. It’s undergone a metamorphosis in eye appeal with regular upgrades as advances in automotive technology made it possible to enhance performance and handling. This high-end luxury car has grown and changed over a period of three generations with each advancing by leaps and bounds over the other. Drivers enjoy the precision handling and passengers are comfortable within the premium luxury cabin with creature comforts and the smoothness that the M6 delivers on the road. The M6 carries on the tradition of performance and excellence intended by the automaker and continues to perpetuate the line that was started over three decades ago.