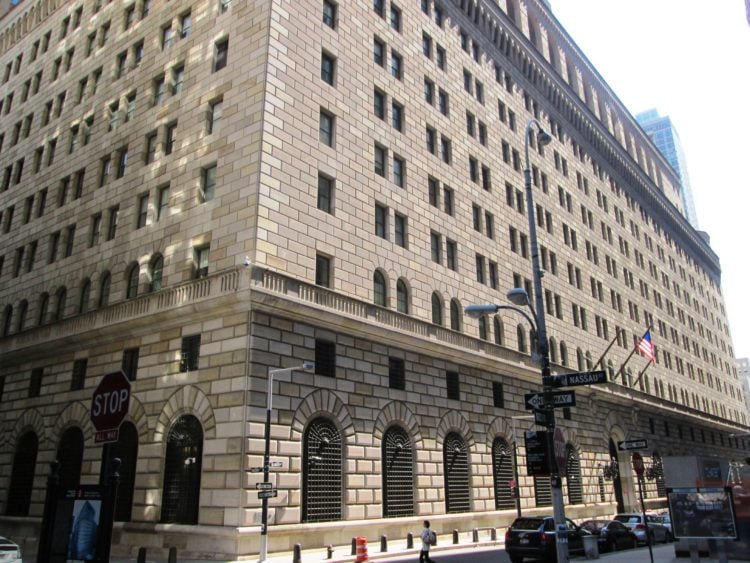 The Federal Reserve bank of New York is a popular tourist attraction for visitors to the city. There are regular tours scheduled for the massive block long building which stands at 33 Liberty Street in New York City. It stands as a symbol of 12 regional banks which exist within the Federal Reserve System and touring the bank is an educational adventure in American finance that everyone should experience at least once. While you’re in the vicinity, here are 10 things to do to make your trip more rewarding.

1. Schedule a guided tour of the Federal Reserve Bank

You can simply visit the bank and enjoy its amazing Renaissance architecture and detailed ironwork, or you can go all the way and schedule a full blown guided tour. We recommend this because there is so much information provided, but in order to get tickets for the tour, you’ll need to reserve them up to 3 or 4 weeks in advance because this is an immensely popular tourist attraction. Plan on the tour lasting for about an hour. One of the most talked about features of the guided tour is getting in to see the gold vault.

This is a tour that takes you back in time to the era of the Revolutionary War and its impact on New York. This is a guided walking tour that lets you in on New York’s history during the late 18th century and it will take you to some of the oldest properties in the city which are still in use. You’ll tour Fraunces Tavern, St. Paul’s Chapel, the St. John Methodist Church, Liberty Pole and you will also learn about NYC in colonial times.

Guided tours are also available in remembrance of the September 11, 2001 event, which includes a tour of the 9/11 Memorial, admission to the 9/11 Memorial Museum, the American Express Eleven Tears memorial and a tour of major elements of the financial district of New York City. This is a two and a half to three hour tour that also includes a tour of Ground Zero and the World Trade Center, the New York Stock Exchange and the Federal Reserve Bank.

Inside Broadway Tours gives you a professionally guided tour of the Theater District. This is a diverse tour that includes stories of the artist who have performed on the stages in the district along with some of the highlights of the more notable historical evens that transpired including sordid secrets from backstage exchanges, ghost stories, superstitions, and legends of the theater world and more. The tours are actually provided by directors and actors who share their first hand experience along with other tales along the way.

Zuccotti Park is another interesting tourist attraction. It was formerly called Liberty Plaza, but after the 911 attacks, the name as changed. The first coffee house that was ever established in the New World was set up in the year 1696 at this location and there are a lot more interesting facts about the Park that you can learn either from a self guided tour or by booking a professionally guided tour to get all of the facts about this historical area.

The Red Cube is a large red cube shaped sculpture that was created by artist Isamu Noguchi in 1968. It’s made of Steel and is located at 140 Broadway. The object is described as a cube but it’s more oblong than that because of the stretching its endured along the vertical axis. If you appreciate art from the late 1960s, then this is a tourist attraction that you’ll want to get a picture of this iconic piece that is proudly displayed.

Another popular locale for NYC visitors is Jim Brady’s Irish Pub and Restaurant. It’s located in the financial district and is a piece of the city’s rich and storied history. James Buchanan brady went by the nickname Diamond Jim. His father established this pub as a saloon, after fleeing Ireland during the potato famine and establishing a new life in America. Jim was born here and went on to establish this famous pub which has been a local establishment since the 1840s.

When you’re this close to Wall Street, you absolutely have to take a tour and one of the most highly rated is The Wall Street Experience. During the tour you’ll hear all about the secret stories about Wall Street insiders in an entertaining and sometimes shocking guided tour. The adventure includes visits to landmarks and buildings in downtown Manhattan along with knowledgeable guides who are happy to answer your questions and you’re welcome to bring along your cameras.

The Fulton Fish Market is an attraction that you’ll want to visit in the early morning hours because this is the time that it is open for business. It’s located at 800 Food Center Drive in The Bronx. This historic market was founded in 1807 and it started out as a fish and general goods market before it converted into a fish market only.

10. Visit the One World Observatory

The One World Observatory is another popular tourist attraction and it is located at 1 World Tour in the Trade Center on Floor 100. It gives you one of the most beautiful views of the city imaginable. It’s best just before sunset to get some of the more spectacular views of the surrounding mountains as well as of the breathtaking metropolitan area.