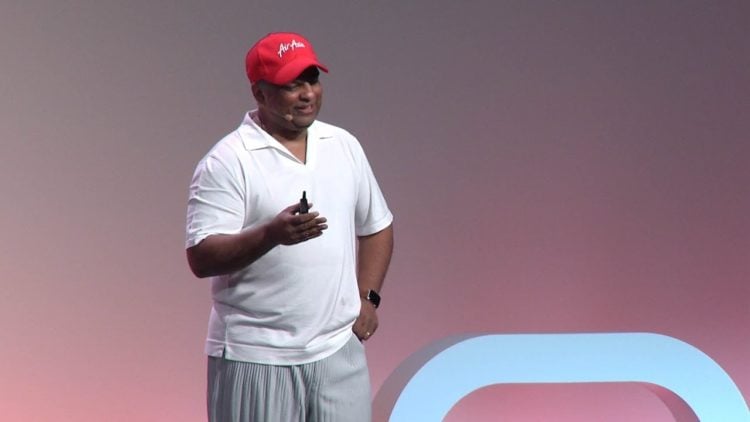 Tony Fernandes is a Malaysian entrepreneur who’s made a fortune from cut-price flying. The music executive turned owner of no-frills airline AirAsia ranks as one of Asia’s richest men. But there’s more to Fernandes than meets the eye. An F1 racing fanatic, a dedicated football fan, and a committed family man, Fernandes has a reputation as one of the nicest people in the business world. Find out more about the AirAsia CEO as we take you through ten things you didn’t know about Tony Fernandes.

Back at the turn of the millennium, Fernandes was looking for a new opportunity. Having always harbored the idea of owning an airline, he decided to see if he could turn his dream into a reality. After approaching the Malaysian government with his plans, he was giving the green light – but only on the provision that he bought an existing airline. He couldn’t have picked a more fortuitous moment. At the time, AirAsia, a subsidiary of the government-owned conglomerate, DRB-Hicom, was losing money hand over fist. Estimates put its debt at around US$11 million (RM40 million). After mortgaging his home and cashing in his savings, Fernandes bought the indebted company for the grand total of one ringgit (about 26 US cents). After clearing its debt, Fernandes set about revolutionizing the company’s business strategy. It worked. Within one year, AirAsia was breaking even. Today, AirAsia has 100 times the number of staff it did in 2001. It’s gone from owning two planes to boasting a fleet of 250. Under Fernandes’ leadership, AirAsia has gone from the verge of bankruptcy to one of the biggest players in the game.

2. He’s one of the richest men in Asia

Back in 2014, Forbes listed Fernandes as the 28th richest man in Asia. At the time, his net worth was a staggering $650 million. Since then, it’s dropped, thanks in no small part to the devasting impact of COVID on the airline industry. Fortunately, his finances are still a long way from being in trouble. According to Forbes latest calculation, the AirAsia CEO is currently worth the grand total of $335 million, making him the 41st richest person in Malaysia.

In 1994, Fernandes married Deborah Lee Bergstrom. The couple share a daughter, Stephanie, and a son, Stephen. They later divorced, but Fernandes found love again with a South Korean actress named Chloe. The couple married at Hotel Cap Estel in Èze on the French Riviera in 2017 after two years of dating.

4. He thinks his biggest strength is finding great people

Speaking to cnbc.com about his leadership style, Fernandes revealed that he believes his greatest asset is his ability to find great people. “I think my greatest strength is finding great people,” he shared. “I look for people who are hungry.”

If there’s one thing Fernandes isn’t lacking, it’s awards. Over the past few decades, he’s been honored on multiple occasions for his achievements. In 2003, he was awarded the International Herald Tribune Award for the “Visionaries & Leadership Series” along with the “Malaysian CEO of the Year 2003” title by American Express and Business Times. In 2005, he was named to Business Week’s “25 Stars of Asia”, while the following year, Ernst & Young named him “Entrepreneur of the Year 2006.” In 2011, FastCompany named him one of their Top 100 Most Creative People in Business. In 2014, he was named “Brand Builder of the Year” at the World Branding Awards.

Fernandes is a very proud, very vocal supporter of the English football club, West Ham. Which makes it slightly curious to learn that he holds a majority stake in a rival club, Queens Park Rangers. Fernandes bought the club back in 2011, saying at the time that “QPR is a raw diamond and hopefully I can contribute to turning it into a diamond.” In actual fact, he had tried to acquire West Ham several months prior but was pushed back by owners David Sullivan and David Gold. Sullivan later claimed that Fernandes’ offer simply wasn’t up to scratch. “He wanted fifty-one percent of the club for two bob,” he said. It was an accusation Fernandes hotly denied. “It was a good offer with good money,” he responded. “I have been a lifelong fan and would have brought good ideas and a new belief.”

COVID has had a devasting impact on the airline industry. It comes as little surprise, then, to learn that Fernandes is trying to cut back on costs as much as possible. Back in November, straitstimes.com reported that Fernandes had put his sprawling Ayrshire estate in Scotland up for sale. According to the publication, the property boasts five bedrooms, an all-weather tennis court, a wine cellar, a sauna, and the epic asking price of £2.5 million (S$4.45 million).

8. He used to work in the music industry

After graduating from the London School of Economics, Fernandes worked for several years as an auditor for Virgin Atlantic and for several more as financial controller for Richard Branson’s Virgin Records. Prior to taking over AirAsia in 2001, he served as the managing director of Warner Music’s Malaysian division and as the South East Asian regional vice-president for Warner Music Group.

Fernandes is quite literally living his dream. Speaking to chrisfharvey.com, the CEO revealed that as a child, he always dreamt of running a running an airline, owning an English football club, and owning a Formula One racing team – all three of which he’s managed to tick off the list. “When I was 14-years-old I knew what I wanted,” he said. “I have achieved all three right now, so I am living my dream. I have an airline, an F1 team, and a football club, so I am basically living my dream.”

It’s not just football that stirs Fernandes’ passion: he’s also a major fan of Formula 1. The millionaire CEO is the founder of the Caterham F1 Formula One team, which raced under the names of Lotus Racing and Team Lotus in 2010 and 2011. In 2009, he took on a bet with Richard Branson to see which of their two teams would win a race. Whoever lost the bet would have to dress up as female cabin staff on the winner’s airline. Fortunately for Fernandes, Branson’s team came in second.