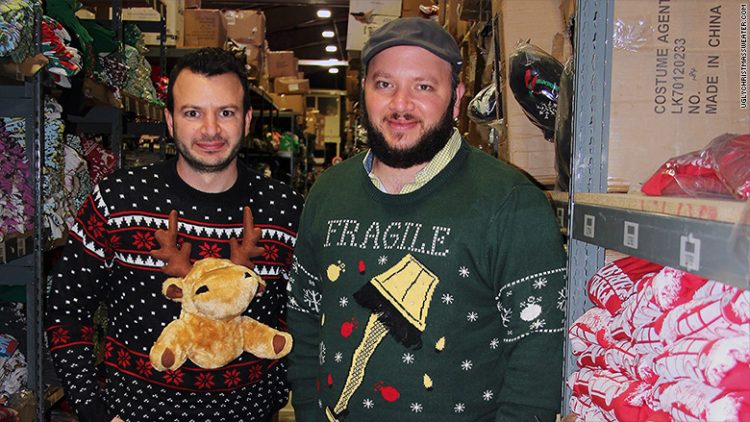 Most of us have participated in ugly sweater parties and they’re really a lot of fun. Wearing them actually kills two birds with one stone. Pictures taken in the ugliest sweater that you own can make the relative who gave it to you for your birthday or Christmas feel good about the gift that they gave you, even if you think it was pretty awful. They don’t need to know that you’re at an ugly sweater party. What was once an uncomfortable situation has now been turned into an event that brings us all together to compare our ugly sweaters and if you’re fortunate enough to have the worst one, win a prize for the article that has been stuck in the bottom of your drawer for a few years.

It is a phenomenon that two brothers had the foresight to capitalize on and we think that their strategy is brilliant. We’re going to take a closer look at the two brothers who are making a fortune in the ugly Christmas sweater business and discover how they’ve accomplished such great success.

Fred Hajjar had an idea. He began to see a trend evolving that centered around ugly Christmas sweaters.It seemed that the once dreaded gift was now becoming a novel pursuit that found shoppers looking for the most dreadful Christmas sweater that they could possibly find. People weren’t waiting for an elder to give them one as a gift, they were actually out in the malls and specialty shops in search of the ugliest Christmas sweater for their own personal use. The tackier the better.

This repurposing of these seemingly useless and often embarrassing articles of clothing is actually a thrifty approach to making good use of something that was once considered to be a waste of storage space and a source of tension when the person who rendered the gift was around. In 2011, Fred made the decision to start his own business. It would feature the ugliest Christmas sweaters so party goers could more easily find what they were looking for. His brother Mark came on board with the idea and the two worked diligently to put it together.

The creation of the business

UglyChristmasSweater.com was officially launched by Fred and Mark Hajjar in 2012. Fred was already operating an online business at the time and so he had a good idea of how to start the business. With a little research into the subject, Fred was surprised to discover that some of the most unattractive sweaters were selling for upwards of one hundred to three hundred dollars apiece. The first year, the two pulled in forty thousand dollars in revenue because they came into the project late in the season. The next year was a different story totally. The 2013 year saw a three hundred percent increase in sales and the following year added an additional two hundred and seventy five percent increase. As of the 2015 business year, the brothers have grown their online ugly sweater business to more than five and a half million dollars in revenue.

The Hajjar brothers were forced to expand the business that they started on a shoe string to a massive warehouse of forty two thousand square feet for storage of the inventory. They also employ ten full time year round workers and add an extra twenty positions seasonally to keep up with the demands of the holiday season. As the business has taken off with immense popularity, they have expanded the selection of their ugly sweaters to include a wide range of themes and novelties in order to satisfy the tastes and expectations of a broader segment of the population. In the short period of time that the ugly sweater business has been in operation, they have achieved monumental success.

The brothers have signed with some of the major brand names to sell officially licensed merchandise, some of them given exclusively to the Hajjar’s business which helps to drive up sales even more. They offer some hard to find articles and this is one of the reasons why their business has taken off with such grand style. Even businesses such as Uber have placed orders with the company, ordering a whopping five hundred ugly Christmas sweaters that bear their company logo for advertisement.

What’s in the future for UglyChrismasSweater.com?

This has truly been a sensation that took off and became a fast success. So long as the demand for ugly Christmas sweaters holds up, business will continue to be great for the Hajjars. As with any fad, there is a tendency for them to fade with time or to pass, so the best thing that the two can do is ride on the wave of their current success and hang with it until it is no longer that rage. There is no way to predict what may happen in the future as this particular business is built upon a trending fad that could become an institution, or go the other way and join the dinosaurs. One thing is for certain, this phenomenon has gone much further than the Hajjar brothers ever imagined possible and it has left them with the resources to repeat in another growing rage is necessary.

The story of the Ugly Christmas Sweater business stands as an inspiration for all entrepreneurs who have a good idea. Not all of these schemes work out the way that we plan or hope, but that is part of the excitement of entrepreneurship. You never know when your idea will be something that can make you a fortune. Even if you are simply pursuing something that is fun or that you think is novel, it could be the next big craze that takes the world by storm. We’ve seen everything from pet rocks to Mistletoe made out of elk droppings as good money makers so you never know until you try. We’re appreciative of the Hajjar’s story and the inspiration that it gives each of us to dare to step out and test the waters.