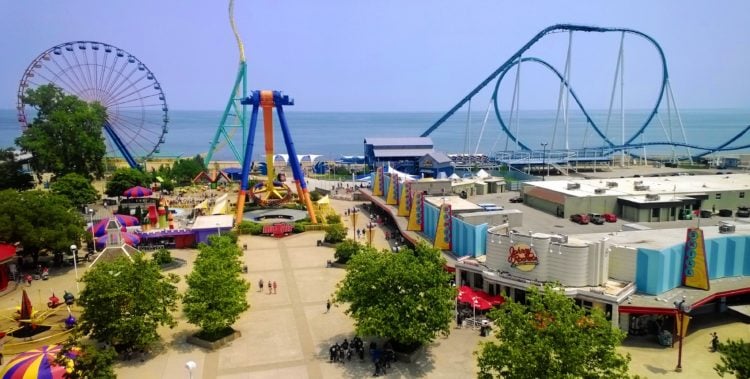 Cedar Fair is a partnership that is traded on the stock exchange. In short, it started out as Cedar Point, which can be found on an Ohioan peninsula that extends into Lake Erie. There are various points of interest about said amusement park, with examples ranging from it being home to a number of buildings on the National Register of Historical Places to it being the second oldest amusement park in the United States that is still operating in the present time. However, in this context, what is most interesting about Cedar Fair is that it enabled the initial Cedar Point Pleasure Company to expand and expand and expand, thus making what is now Cedar Fair possible.

How Does Cedar Fair Earn Its Revenues?

Based on the earlier statement, it should come as no surprise to learn that Cedar Fair earns its revenues through the operation of its various properties. Primarily, this means amusement parks, seeing as how the partnership owns and operates a dozen of them situated in the United States and Canada. However, it owners other properties as well, which include a couple of outdoor water parks, one indoor water park, and a number of hotels. As such, while Cedar Fair is concentrated in amusement parks, it has a sizable presence in the hospitality industry as well.

As for the makeup of Cedar Fair’s portfolio, well, suffice to say that it is very traditional in nature. However, that isn’t necessarily a bad thing because it makes it that much easier for interested individuals to consider its upsides and downsides. Something that is particularly true because Cedar Fair has been in its chosen line of business since the 19th century, meaning that there is a lot of information about its performance over time.

Why Should You Hold On to Your Cedar Fair Shares?

Generally speaking, when people are interested in dividend stocks, they are interested in the reliability of the dividend payments. Certainly, people want their dividends to grow higher and higher, as shown by how the companies that manage to raise their dividends on a consistent basis over time receive superlative titles such as “dividend aristocrat.” However, most people who want dividend stocks care more about the reliability of their dividend payments, not least because they might be counting on those dividend payments to make their budgets work. Unfortunately, Cedar Fair has some issues when it comes to that particular consideration.

For starters, it is worth mentioning something about the trend of Cedar Fair’s dividend payments. On the whole, they have been going up. However, Cedar Fair cannot claim the same kind of consistency found in, say, dividend aristocrats. Instead, there have been points in time when its dividend payments have dropped, though for full context, they have still been paid out again and again on a very reliable basis. With that said, these drops are not particularly surprising because there is actually a fair amount of risk built into Cedar Fair’s offering of its services to interested individuals.

In short, Cedar Fair is impacted to an enormous extent by the weather. First, most of its properties aren’t situated in places like the state of Florida, which boasts a welcoming climate that can enable revenue generation all-year-round by accommodating visitors all-year-round. Instead, a lot of Cedar Fair’s properties have to close down for a considerable part of the year because of the climate, meaning that it has a limited window in which to earn revenue by operating those properties.

With that said, Cedar Fair isn’t a lost cause. In part, this is because about 50 percent of the people who visit its properties do so by using season passes, which is critical because season pass holders are a much more reliable source of revenue than people who choose to head in on much more limited passes. After all, once season passes have been paid for, they have been paid for, meaning that Cedar Fair has already collected those sums even if the pass holders don’t necessarily make use of them as much as they could have for whatever reason.

On top of that, there is one more reason for people to have faith in Cedar Fair’s reliability in spite of the very real risks that are inherent to its business model. In short, it has been owning and operating amusement parks and other properties since the 19th century, meaning that it has overcome a wide range of potential problems for its revenue-earning operations, including a fair number of economic recessions and worse. As such, Cedar Fair boasts a record of consistent success that most companies can’t hope to match and won’t ever be able to match, which should be particularly reassuring because its performance in recent years isn’t actually bad so much as not quite “dividend aristocrat” level. However, most companies have very little chance of ever securing that coveted status, meaning that this isn’t actually much of a knock against Cedar Fair.

In any interested individuals need to remember that they are the ones who know their investment priorities the best. Due to this, reading other people’s opinions about Cedar Fair can be very useful, but in the end, they are going to have to make the decision for themselves, meaning that they will want to delve deeper before taking any serious steps.